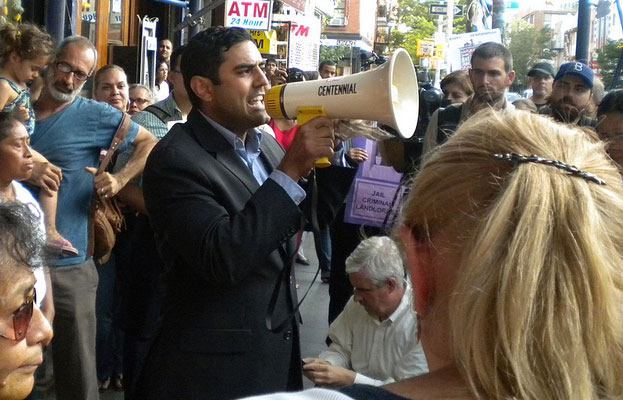 ALBANY, N.Y. — On Sept. 13, 2012, when voters go to the polls to pick candidates in the state’s legislative primaries, it is possible that the status quo will prevail.

Incumbents who rely on the support of the system they control, buttressed by the largesse of major businesses and wealthy donors and the general apathy of a disengaged electorate, may find themselves coasting to an easy victory against upstart challengers. Or not.

A series of sordid scandals gripping the New York State Legislature over the past few weeks could lead to a surprisingly different outcome.

Just over a week ago, it was revealed that the Assembly cut an over $100,000 publicly-funded deal with two women who claim to have been sexually harassed by one of their most influential colleagues, Brooklyn power broker Vito Lopez. The 71-year-old Democrat was stripped of his seniority in the Assembly, his committee chairmanships, his staff funding, and is not allowed to employ anyone in his staff under the age of 21. The fallout continues everyday and is now likely to lead to an investigation of Assembly Speaker Sheldon Silver’s handling of the case.

Also enmeshed in her own scandal is Queens Democratic state Sen. Shirley Huntley, who was arrested on federal fraud, forgery and conspiracy charges last Monday in connection with a scheme that bilked the state of $30,000 in cash directed to the nonprofit she founded.

Huntley’s opponent in the Democratic primary, City Councilman James Sanders Jr., says people have told him he should be celebrating.

“People were saying how I should be happy in her declining fortunes. I think it is actually sad to see an elder in handcuffs," he said. "Little kids really look up to us. We should never do anything to break the hearts of children.”

Two other Assembly members up for re-election have been caught up in political drama: In the Bronx, Assemblywoman Naomi Rivera stands accused of giving cushy political jobs to her lovers; and, in Brooklyn, Assemblyman William Boyland, got off one set of bribery charges only to find himself indicted again after prosecutors say they caught him seeking bribes to pay off his legal bills.

None of the political office holders involved in the scandals responded to requests for comment for this article. A call to Huntley’s number was greeted by the echoing sound of a dial tone after introductions were made.

While Huntley’s arrest was dramatic and the accusations against Rivera arousing, Brooklyn boss Lopez was such a powerful figure in New York politics that the scandal could carry over to his allies.

That is certainly what Jason OtaĂ±o hopes. OtaĂ±o, who served as general counsel to Brooklyn Borough President Marty Markowitz, entered the race against Sen. Martin Dilan knowing that the incumbent was backed by the Lopez political machine. Now that the Lopez scandal has blown up, OtaĂ±o hasn't been shy about underscoring the connection between Dilan and Lopez.

He called the Dilan political clan which includes the senator and his son Councilman Erik Dilan "a wholly owned subsidiary of Vito Lopez."

OtaĂ±o is an ally of U.S. Rep. Nydia Velazquez — a political opponent to Lopez and Dilan. “I looked at the entirety of the political structure in North Brooklyn and planned [on] running for City Council," he said. "But I felt we weren’t doing enough for the reform movement."
Erik Dilan challenged Velazquez in a primary earlier this year and she is backing just about all the candidates running against Lopez’s favorites.

Dilan’s office did not return calls requesting an interview.

Dilan faces the same trouble most of his Senate allies do — their record of legislative achievement. Democrats squandered a chance to enact major pieces of their agenda when they held the majority and, since they lost it in 2010, they have been pushed into irrelevancy by the Senate Republicans, the Independent Democratic Caucus and Gov. Andrew Cuomo, who avoids them like the plague. Cuomo’s avoidance of them could have to do with the taint of scandal. But OtaĂ±o sees himself as part of the solution to the Senate Democrats' problems.

“I believe it is no secret to anybody that Albany is a mess," he said. "The Legislative process is really at issue. My opponent refused to work toward legislation that really benefits constituents who are priced out of their homes, Latinos who have been displaced. That has all been enabled by loopholes in legislation.”

The failure of Democrats to champion stronger pro-tenant legislation has haunted them since Sen. Pedro Espada chaired the housing committee and, in the view of most housing advocates, intentionally blocked pro-tenant legislation to cow tow to his major donors in the real estate industry. “Someone in this district should be a leader on these issues,” OtaĂ±o said. And OtaĂ±o has the backing of Tenants PAC, an organization that has mobilized a number of its members to knock on doors for the candidate.

Sanders also believes his opponent didn’t do enough as a member of the Democratic caucus to deal with housing issues and help her district. “The real issues are gun violence, the lack of jobs, the great recession caused havoc [in] our community and predatory lenders have focused on our community," he said. "The people of this district have been failed by government on all levels.”

Cleaning Up the Democratic Party

Sanders says the state Democrats need a makeover. “I am part of the clean team.” OtaĂ±o also thinks the next generation of politicos are ready to clean up the “mess.”

“I do believe we have a great young crop of individuals involved in public service who are ready to take the machine to task — people like Jesus Gonzales and Lincoln Restler,” OtaĂ±o said.

Restler has been challenging Lopez’s power on the county level, while Gonzalez ran for the Assembly seat vacated by Ed Towns last year.

Gonzalez, a community organizer, faced Ed Towns' daughter and Raphael Espinal, who worked in the Council office of Erik Dilan, and had a number of staffers working for him who were also on the payroll of Martin Dilan. Of course, given the Dilan family's association with Lopez, Espinal almost assuredly had the Brooklyn power broker's backing — and won the race soundly. But Gonzalez made such an impression that he was encouraged to run for Council in 2013.

“Young, insurgent, upstart” was a phrase used to describe now-incumbent Sen. Gustavo Rivera two years ago when he challenged and defeated scandal-ridden Sen. Pedro Espada — the man behind the 2009 Senate Coup.

While Espada was eventually convicted on federal charges for stealing hundreds of thousands of dollars from the publicly-funded health clinic he ran, he lost his seat to Rivera long before those charges were brought.

This year, Rivera is facing a primary challenge from Manny Tavarez. The primary is largely seen in political circles as payback from the camp of Rep. Charlie Rangel for Rivera’s backing of Rangel’s primary opponent, Sen. Adriano Espaillat.

Tavarez didn’t return calls for an interview request. Rivera refuses to comment on his opponent’s motivations, but he says he is excited to have a challenger.

“I don't know why the gentlemen is running, but I welcome it as a chance to talk about what we’ve done and get out there in the community," he said. "I've been available, accessible, so I think people know me.”

Rivera says he is tired of hearing about what Democrats could have done when they were in the majority. “That is a tired argument," he said. "This is a completely different conference.”

It’s unclear how much damage the recent scandals will do to incumbents in the primary and Democrats in the general election.

“Everyone has seen that movie where the good guy is fighting the vampire and he knocks 'em down and turns his back and the audience is screaming â€You gotta drive a stake through its heart!’ Well, I plan on driving a stake through this election,” says Sanders. “We are going to continue knocking on doors. The real threat is apathy. People say all politics is corrupt. If you think none of the above are worth voting for, then you should run.”