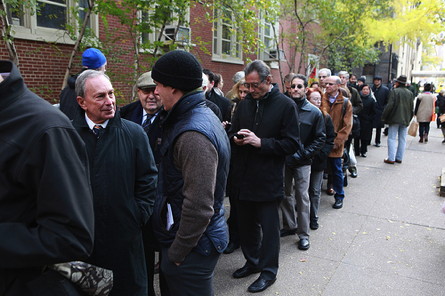 After the damage wrought by Hurricane Sandy in the city, voting may have been a second thought for more than a few New Yorkers.

But for others it was worth standing on line in the cold for hours or trekking through their still blacked-out neighborhoods to be able to exercise their basic right to cast a ballot in the general election yesterday.

Voters took to the Internet to document their sometimes frustrating experience getting to the polls and casting their ballots.

There were broken voting machines in Manhattan. In Coney Island, voters waiting for rides on public shuttle buses to relocated polling places said they were passed by repeatedly without being picked up. At other sites, there were a shortage of ballots. And even Mayor Michael Bloomberg had trouble voting — he reached over the table and found his own name in the voter registry after a poll worker failed to do so.

City Councilman Jumaane Williams documented problems across his Brooklyn district on Twitter, including “insanely long” lines, shortages of pens, poll workers instructing voters to vote down one party line and voters simply being turned away. In some tweets, he addressed the city’s Board of Elections directly.

“This is outrageous, disgraceful and disrespectful to what voting should be @BOENYC I didn't think you could top the primary, but CONGRATS!” he wrote, referring to this year’s primary when the Board was criticized for handling vote counting in key races.

Board spokeswoman Valerie Vazquez said there were a number of difficulties during the day caused by the fallout from the storm. The Board consolidated or relocated about 60 poll sites that were damaged by the storm, and announced the new locations less than 72 hours before voting began.

“We worked diligently to communicate these changes to New York voters and our poll workers,” she said. “We know that some voters experienced long lines here in New York — much like voters across the United States — as is common with high voter turnout associated with a presidential election.”

Voters also encountered problems acting on Gov. Andrew Cuomo’s recently signed executive order that allowed New Yorkers to vote at any polling place in the state. Not only were displaced voters turned away in Manhattan and Queens, but also upstate in Rensselaer and Albany counties.

Good government and civil rights groups said they were swamped by calls from voters complaining and seeking assistance.

While the state was not considered competitive for the presidential election, with New York’s electoral votes going to Barack Obama as expected, the real fights were at the state and local levels.

In the 15th State Senate District in Queens, where Hurricane Sandy’s destruction is absolutely inescapable, Republican Councilman Eric Ulrich was challenging incumbent Democrat Sen. Joe Addabbo. Ulrich told reporters as he cast his ballot yesterday that Democrats were trying to “obstruct the election” by waiting until Monday to announce emergency polling places.

He and Addabbo both suspended their campaigns in the wake of the storm.

Sen. Joe Addabbo declared victory at Woodhaven House around 12:30 this morning. He told the crowd: “Our attention and prayers tomorrow should be to the victims of Hurricane Sandy." However, Urlich was not ready to concede and told supporters that paper ballots needed to be counted.

The outcome of the race in the 15th district could help determine the control of the State Senate. Republicans currently control 33 of 62 Senate seats.

Another key race, in the 46th Senate District upstate — created during the latest redistricting process — Cecelia Tkaczyk and Assemblyman George Amedore both declared victory. Early this morning, Tkaczyk was ahead by 139 votes but further counting is very likely. The district was thought by many to have been tailor-made by Republicans to secure them another Senate seat, but as election day neared Tkaczyk made large gains, according to a Siena College poll.

Republican Sen. James Saland, who voted for same-sex marriage, trailed his Democratic opponent Terry Gipson by 1,600 votes and a recount is expected.

The 40th district race between controversial Republican Sen. Greg Ball and Democratic challenger Justin Wagner appeared to be contested despite the fact that Ball declared victory early on in the night.

Steve Napier, a spokesman for Wagner, issued a statement saying the race was too close to call. "We will pursue a full and fair count of all ballots, and we are confident that in the end Justin Wagner will be seated in the New York State Senate,” he said in a statement.

Conservative Democrat Simcha Felder appeared to be the clear winner in the 17th district in Brooklyn. Felder has indicated he may caucus with Republicans despite the results of the election. The Daily News reported yesterday that a deal has already been struck for Felder to join the Republican Conference.

Further, if Democrats pull ahead in the count, they still may not gain control as the breakaway Independent Senate Democrats have vowed to stay independent no matter what the outcome of the election is.

Democrats appeared to pick up at least five seats in the Assembly. Assemblyman Vito Lopez won reelection despite the sexual harassment scandal that hangs over him. Another scandal plagued politician, Assemblyman William Boyland, also retained his seat.

Not enough votes had been counted by press time to determine the winner in the special election to fill the City Council seat in the Bronx vacated by disgraced politician Larry Seabrook. Former union organizer Andy King was leading, with 33 percent of precincts reporting.

Voting results are unofficial until they are certified by the BOE.