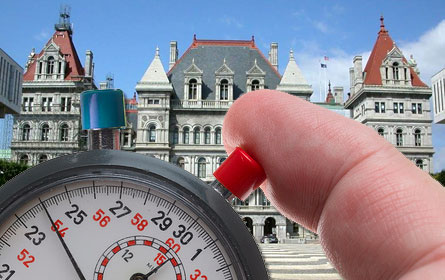 For updates on the impasse in Albany and its effect on New York City, stay tuned to The Wonkster.

As the state enters week four of the Albany impasse, New York City is out about $6 million -- which the city projects will grow to $60 million -- and has a new governing body of sorts for its public school system.

The State Senate spent the holiday weekend trapped in the capital. No fireworks allowed.

And leaders on both the Republican and Democratic sides in Albany still have not come to an agreement over who controls the State Senate. Democrats have moved on a number of bills affecting local government across the state, including voting down the city's sales tax increase, but everyone else in Albany argues the votes don't count. Republicans have urged Democrats to meet in public, but Democrats have continually failed to appear.

All this in less than a month, and some fear we could have a whole summer full of Senate squabbling.

It has been an embarrassment to the state. But for the city and Mayor Michael Bloomberg's agenda, there are much larger consequences.

In failing to pass legislation, the Senate added a new item to its ever-growing list of casualties: the city's budget. In order to close a gaping budget hole, the City Council and the Bloomberg administration agreed to increase the city's sales tax by 0.5 percent, bringing it up to a total of 8.875 percent. The hike was expected to increase city revenues by $518 million, and was supposed to go into effect on July 1 -- the first day of the city's fiscal year 2010.

Now the measure is floundering in Albany's dysfunction, and its support in the State Senate is now questionable.

Of all the bills the Senate Democrats took up in what most consider an invalid vote Tuesday, the sales tax was the only measure that was defeated, going down 19 to 13. The opposition was led by Bronx Sen. Bronx Ruben Diaz Sr. who said by raising the sales tax the city was balancing the budget on the backs of the poor.

On Wednesday, Bloomberg said he was as "surprised as anybody" that the measure did not receive support in the Senate. Any more cuts, which the city may have to make now that its will not get the expected sales tax revenues, will be "very painful," the mayor added.

"We have a hole of at least $60 million created yesterday," the mayor said.

According to administration officials, the city will lose $2 million in revenue every day it must go without the tax increase. Because the legislation is written to take effect on the first day of the following month, the city already will lose out on revenue for all of July -- costing a total of $60 million, officials said.

That sum, according to the administration, could support 600 police officers or the Fire Department's 198 engine companies and 143 ladder companies.

The Assembly has already approved the tax measure.

The effect of the inaction on school governance is harder to predict. For the past few months, Bloomberg has sought to portray the expiration of mayoral control of the school system in its most apocalyptic terms: riots in the streets, a return to the Soviet Union and so on.

But on Thursday afternoon, seven members of the newly resurrected Board of Education, which includes three deputy mayors, met at the Tweed Courthouse to calmly approve the designation of Joel Klein as schools chancellor, giving him the same responsibilities he had a day before under mayoral control. They also passed a resolution urging the State Senate to speedily approve the extension of mayoral control. They then decided not to meet again until September 10 -- the day after school starts.

It appeared that little had changed in the city's school system.

In a press briefing yesterday, Bloomberg said: “What we’re trying to do here is to continue on as though mayoral control was approved, and it’s our assumption that it will be sometime in the very near future. If in the fall we find out that it wasn’t, we have a different set of issues." Until that happens, Bloomberg said, it will be business as usual inside city schools.

The mayor kept control over the school system because the majority of the borough presidents, who appoint five out of the seven members of the Board of Education, named mayoral allies who largely support his running of the school system.

Only Bronx Borough President Ruben Diaz Jr. selected an appointee, Dolores M. FernĂˇndez, who has questioned the mayoral control policy. But even she approved the re-appointment of Klein.

On Wednesday, Diaz said he “never had a problem telling the chancellor what’s on my mind... I am not here to rubber stamp anyone.”

The other borough presidents said they too would speak out if the chancellor adopted a policy they disagreed with. But, considering the Board of Education will not meet until September -- if it meets at all -- it is unlikely the borough president's appointees will have any influence over city schools.

“We think this is a total sham,” said Jane Hirschmann, of Time Out From Testing, who was kicked out of Wednesday's press conference for not having media credentials. “This is still the mayor."

If and when the Senate returns to business, what will happen to mayoral control? The Assembly has already passed a bill -- proposed by Speaker Sheldon Silver -- that essentially retains the current system. The mayor supports that legislation.

Sen. Frank Padavan has sponsored that bill in the Senate and has said he thinks at least 40 senators would vote for it if it came to the floor.

It does not, though, have the backing of new Democratic leader Sen. John Sampson. He has offered his own mayoral control bill, which would continue to let the mayor name most members of the Panel for Educational Policy -- the largely toothless body that replaced the board -- but would require those members have set two-year terms. They currently serve at the pleasure of the official who appoints them.

While the change might seem arcane, set terms have emerged as a kind of litmus test issue in the fight over mayoral control.

Further complicating the picture is the fact that the Assembly is no longer in session. Under normal circumstances, if the Assembly and Senate pass different bills on the same issue, the two sides hold a conference to come up with a compromise measure. But that cannot happen if the Assembly has gone home for the summer.

"If the Assembly is in town and in session we can have negotiations," Sen. Liz Krueger said last week. 'Without the Assembly in town we are obviously in a situation where if we didn't pass the one law, it sunsets. If we wanted to pass something, we only had the one bill option."

Sampson and his allies, though, have said repeatedly that the mayor cannot browbeat them into passing his version of mayoral control. Among themselves, Sampson said in a written statement, Democrats "may have different opinions on school governance, but we are firmly opposed to mayoral control of the Senate."

A number of senators may welcome the chance to discus school governance further. "You know I have relative comfort with the bill that passed the Assembly but know we could have done better," said Krueger. "I wanted to see stronger language for the role of [community] superintendents and their authority."

Some critics of the current system go further, expressing relief that the chaos could derail passage of the Silver proposal.

As mayoral control sunset, the Parents Commission on School Governance, which seeks a greater role for parents in the running of the schools, released s statement saying, "Many parents will celebrate the removal of an oppressive dictatorial system that has not served their children well. We look forward to working in the future with the Senate, the Assembly and the governor to install a new governance system, with adequate checks and balances and a real voice for parents, in which no one, no matter how wealthy and powerful, can make all the decisions when it comes to our children."

We know state senators like their weekends. Being a patriotic lot, they probably adore the time they have to barbecue with family, attend parades and do the whole bit on the Fourth of July.

Last week Gov. David Paterson called them into special session, senators put on their happy faces and told reporters a deal was at hand and asked Paterson to send them home to cool off. No such deal came together.

On Wednesday, Paterson issued proclamations for special sessions through July 6. You would think both sides would be in a hurry to get a deal done, pass important legislation and then get out of Albany. But at this point the prospects of a deal seem fairly slim. Although there is still a glimmer of hope.

Meanwhile, Sampson said on Wednesday that the Senate is in “summer recess at this point in time.”

Last week Democrats were calling on Republicans to stop focusing on long-term leadership issues and instead come to an agreement on a short-term plan that would allow both sides to vote on time sensitive legislation. But now Democrats claim they have already addressed most of the non-controversial legislation during Tuesday's session, which was spurred by Sen. Frank Padavan’s jaunt through the Senate chamber on his way to get a V8.

Now the governor, the Assembly and Senate Republicans wonder whether the Democrats' action was legitimate. Paterson has refused to sign the bills supposedly approved by the Senate, and the Assembly has declined to send the bills to the governor -- a normal pro forma legislative action. If the bills do become law, Republicans are likely to go to court to try to stop them.

Republicans are already quite busy with legal cases. They have a case pending against Angelo Aponte, secretary of the Senate. The charge he prevented them from submitting new legislation or printing bill jackets, blocking them from the Senate rostrum and generally making it hard for them to function as part of the Senate. Republicans want to block Aponte from performing his duties. If they win that case, it will go a long way toward legitimizing the June 8 vote that Republicans claim made Sen. Pedro Espada president of the Senate and Sen. Dean Skelos majority leader.

Republicans are also appealing a decision by Supreme Court Justice Joseph Teresi that requires Republicans and Democrats to show up in the Senate chamber at the same time during extraordinary sessions. Republicans claim other branches of government should not meddle in legislative business. But late Wednesday Espada and Skelos asked Paterson to help broker negotiations in his office.

Most of the Democrats didn't seem to be in any hurry to join in. They still feel securely in control of the Senate majority offices, along with the payroll and the staff that makes the legislative process work. But late Thursday leaders from both sides met in Paterson's office. They presented the governor with the proposals that have yet to yield an agreement. "Both Senator Espada and our conference, we have a short-term and long-term agreement," Malcolm Smith told reporters."We are trying to get the two of them together, so we can determine how to move forward. The governor has agreed to look at both agreements and we'll try to come back tomorrow."