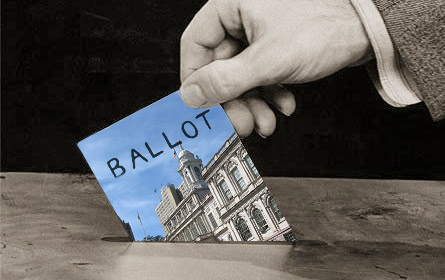 Turnout is likely to be anemic, experts say. But that is no reason to head to the polls uninformed.

In our latest Guide for the Last Minute Voter, we have an exhaustive look at the Bloomberg record, stories on the race between Mayor Michael Bloomberg and Comptroller Bill Thompson, a look at a handful of competitive City Council races, information on the city's other contests (including public advocate, comptroller and two ballot questions) and general information on voting in Tuesday's general election.

And to see whether there is a race in your district, check out Who's Running for What.

Another Term Awaits: Personalities and politics have dominated the mayoral campaign, but the two top candidates have positions on a range of issues. We look at what each man has said he would do as mayor.

Where They Stand: A brief breakdown of where Mayor Michael Bloomberg and Comptroller William Thompson stand on some of the city's most important issues.

Fact Checking the Campaign: The claims and charges are flying from Bloomberg to Thompson and back again. A look at the fact -- and the fiction -- behind the rhetoric.

Bill Thompson Hopes for an Upset: The city's affable comptroller mounts a tough challenge against a popular mayor.

In Control: No one can deny the mayor has made big changes in the New York City school system but debate still swirls around how effective his policies have been.

ARTS
Patron of the Arts: Even in the face of the faltering economy Mayor Michael Bloomberg has taken steps to insure New York's cultural institutions survive and thrive.

HOUSING
An Increase in Homelessness: The mayor pledged to decrease the number of people without homes, but despite his intentions and new programs, the number of families in city shelters continues to climb.

ENVIRONMENT
Steps Toward Sustainability: The announcement of PlanNYC 2030 in 2007 heralded a new emphasis by the Bloomberg administration on reducing pollution and confronting climate change.

TRANSPORTATION
The MetroCard Mayor?: Michael Bloomberg has made major steps to improve transportation in the city -- except when it comes to the subway system.

ECONOMY
Confronting the Challenges of Boom and Bust: James Parrott looks at the last eight years and finds that, despite the mayor's huge success as an innovative businessman, his management of New York City's economic fortunes has been pretty conventional.

IMMIGRANTS
Governing a City of Newcomers: Always a supporter of immigrants, Michael Bloomberg during the election season, has announced more initiatives to aid the foreign born -- and advocates will be watching to make sure these go beyond campaign promises.

SOCIAL SERVICES
Redefining Poverty -- Then What?: Michael Bloomberg won widespread praise for his push to change the way governments measure poverty. Reactions to what he has done after are less effusive.

PARKS
Bloomberg's Green Empire: Recognizing the importance of parks, the mayor has expanded and improved New York's open space -- but critics wish he had consulted more with communities along the way.

PUBLIC FINANCE
Bloomberg as Budget Master: Reflecting a changing economy, the mayor's fiscal policies have changed while the city has gone from bust to boom and back again.

VOTING
Businessman, Billionaire, Reformer?: Michael Bloomberg's handling of issues involving elections and governance raises the question: Is he above politics or a politician whose wealth lets him play the game in a different way?

HEALTH
The Health Mayor? While the administration has garnered attention for restricting smoking and trying to get New Yorkers to eat well, its actions on health policy go far beyond that.

CRIME
Bloomberg and the Police: Crime has hit new lows under Mayor Michael Bloomberg, but experts wonder if he deserves the credit and some critics charge that new police practices infringe on the rights of New Yorkers.

BLOOMBERG IN ALBANY
The 63rd Senator: The mayor won the school control battle and some funding fights too. Has he finally figured out how to get his way in the state capitol?

LAND USE
Reshaping the City: Who's Being Heard -- and Why?: To meet the post-industrial age, the Bloomberg administration has rezoned one sixth of New York's land.

Two Familiar Names Vie in District 30: A stalwart of city Republican politics hopes he can win the traditionally GOP seat back for his party.

Back to the Voters in Southeast Queens: Eric Ulrich won a surprise victory in last year's special election from District 32 and became the council's youngest member. Now he must survive a one-on-one race with a veteran area activist.

Republican Mounts a Challenge in Bay Ridge: A Republican hopes he can ride the mayor's coattails and defeat a Democratic incumbent in District 43.

Other Council Races: All but two City Council members face some kind of challenge this Election Day. For information about your representative and who else will appear on the ballot in your district, see Who's Running for What.

ALSO ON THE BALLOT

Elsewhere on the Ballot: Voters will choose the public advocate, comptroller, borough presidents and judges and vote on two ballot questions on Tuesday.

Where and How to Vote: A roundup of key information on poll hours, absentee ballots and more.