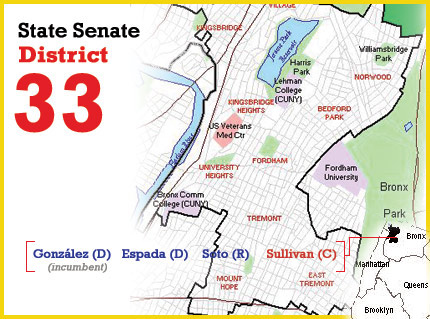 The Democratic primary in this swath of the west Bronx " shapes up as the toughest taste test since the Iran-Iraq War," Tom Robbins recently wrote in the Village Voice. The contest features two candidates who have faced repeated questions about their integrity and ethics.

The primary also includes Richard Soto, who operates a real estate company and served as chief of staff for former Bronx City Councilmember Israel Ruiz. Soto will remain in the ballot -- as the Republican and Independence candidates -- in November regardless of what happens in the primary. For the primary, though, Soto "largely been an absentee candidate," according to the Norwood News. William J. Sullivan is the Conservative Party candidate.

Incumbent Ephrain Gonzalez, runs while under indictment on federal charges alleging that he used hundreds of thousands of dollars intended for non-profit organizations for his own use, including personalized cigars. Gonzalez, who maintains his innocence, is set to go on trial in October -- after the primary.

Despite being under indictment in 2006, Gonzalez, a former bus driver who has held the office since 1989, won the general election with 97 percent of the vote.

His opponent, former City Councilmember and State Senator Pedro Espada Jr. was the subject of a public corruption investigation but never was charged, according to Robbins. Later three executives of his Soundview Health Centers pleaded guilty to steering $30,000 from various health programs into Espada's political campaigns. Questions have arisen over whether he really lives in the Bronx district, although he has apparently survived an effort to disqualify him from running this year.

The Bronx Democratic organization is supporting Gonzalez. Espada earned its enmity for bucking the party organization and for allying himself with Senate Republicans when he served in the legislature.