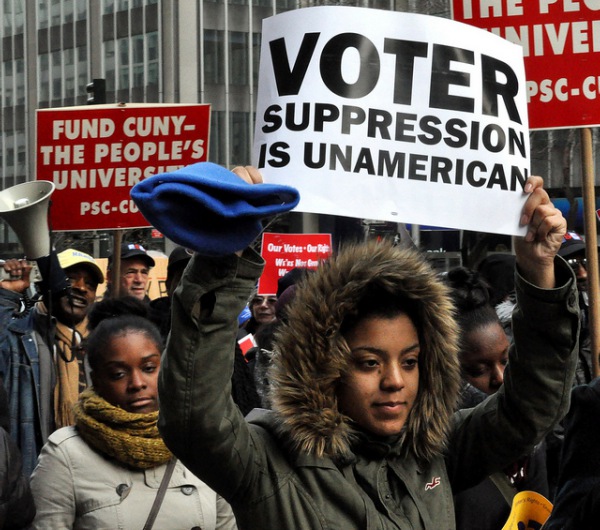 The case, Shelby County v. Holder, involves the landmark Voting Rights Act of 1965 — in particular Section 5, which was created to reverse systemic discrimination against blacks by requiring that all changes to voting laws be reviewed by the Department of Justice. The country’s highest court heard oral arguments in the case last week, and some observers believe Section 5 could be struck down by a majority of the justices in the months ahead.

In addition to a number of Southern states including Alabama, Georgia, Louisiana, Mississippi, South Carolina, and Texas, the law also applies to three New York City counties: Manhattan, Brooklyn and the Bronx. As a result, most of the city’s election-related legislation is more or less guided by the Voting Rights Act.

Some of the law's defenders argue that the city's diversity — where its 8.2 million residents speak a myriad of languages and have varying levels of education — makes the statute all the more necessary and relevant.

“If the U.S. Supreme Court were to overturn it, the residents of these communities could be subject to discriminatory voting practices, such as race-based gerrymandering, without the protection of Department of Justice or federal court preclearance,” wrote Democratic U.S. Rep. Hakeem Jeffries, who represents a congressional district protected under the Voting Rights Act, in an e-mail Tuesday. “That outcome is unacceptable.”

While this year's local races are unlikely to be affected by where the Supreme Court lands on the case, the striking of Section 5 would dramatically alter how city officials handle elections in future years. Whereas the provision in question attempts to guarantee fair redistricting and ballot access for minorities, voters would have to rely on lawsuits and lawmakers to ensure the same without federal guidelines.

On this year’s Martin Luther King, Jr., Day, Bloomberg and Quinn filed an amicus brief filed in support of Section 5. They wrote that the city has obtained preclearance from the U.S. Department of Justice more than 2,000 times over the last 41 years since the three New York City counties became subject to Voting Rights Act.

"This King Day, we are reminded that all too often there are a handful of those who would rather ignore these rights by re-installing barriers, often on the basis of race, economics or political affiliation,” they wrote in the amicus brief. “We can’t allow the voting rights of our citizens to be eroded by such ignorance.”

The brief cites approved changes to voting practices including both the changing of polling sites for certain communities and the inclusion of new languages on election materials. For instance, the city plans to debut long-delayed Bengali ballots in 2013 in order to comply with the Act's language assistance requirement. The Act guarantees that minority groups that have more than 10,000 potential voters with less-than-average literacy levels must be guaranteed ballot access.

It's a far cry from the very case that pushed Manhattan, Brooklyn and the Bronx under Section 5 in the first place. New York was one of many jurisdictions to use literacy tests in the 1960s. It wasn't until the U.S. Congress passed a provision in the Voting Rights Act to protect English-illiterate voters their right to a ballot.

It had a direct effect on the voting power of New York’s Puerto Ricans, who were previously limited by the literacy test. The lack of a test, however, angered a group of registered voters in New York City, who mobilized against the new law by arguing that it violated the Tenth Amendment. In 1966's Katzenbach v. Morgan, the Supreme Court overrode the states' right argument. Instead, the court under Chief Justice Earl Warren defended Congress' ability to protect voting rights beyond what the Court itself may have already recognized.

The Supreme Court under Chief Justice John Roberts faces a similar argument this year — that the federal government's requirement for preclearance is too onerous of a burden for local and state government. Shelby County's arguments have previously failed in the district courts and yet have made it to the country’s highest court, which heard arguments that left some local leaders worried about last week’s hearing of arguments.

While asking questions of the Solicitor General Donald Verrilli last week, Supreme Court Justice Antonin Scalia posited that continued Congressional support for the Voting Rights Act may be a “perpetuation of racial entitlement,” arguing that the federal government may have fallen complacent to such entitlements through the political process.

Voices from around the country immediately decried Scalia’s presumed argument.

“It was insensitive,” said City Councilwoman Letitia James of Brooklyn, in an interview with the Gotham Gazette on Tuesday. “It belies the facts.”

James said that the Voting Rights Act, especially Section 5, is responsible for ensuring fair and easy access to voting as recent as November’s general election. It was the Act, she said, that prevented maneuvering towards what some courts found to be excessive requirements for voter identification and protected language minorities’ right to vote.

Besides ensuring minorities’ access to the polls, James argued that the Act also helps to ensure that minorities are fairly represented in different levels of government by way of redistricting rules.

“It’s critically important that districts be apportioned to ensure minority representation in government,” she said. “Period.”

Minority groups around the city have made the case over the years for better representation in government, including during last year’s Congressional primaries. Residents and political advocates tried to secure a new Latino-majority Congressional district that would have included parts of Manhattan, the Bronx and Queens.

More recently, advocates in Queens argued for the creation of an Asian-majority city council district. The Asian-American Legal Defense and Education Fund was one of many organizations that joined with a coalition of groups to debate the merits of an empowered Asian voting bloc in Queens.

Jerry Vattamala, a staff attorney with AALDEF, said that the Voting Rights Act has been extremely beneficial to people of color — even to those who don’t live in the counties protected by Section 5. Its protection of minority voting rights, he said, were integral to the city electoral venture.

“At every stage of redistricting,” Vattamala said, referring to the process of redrawing district lines after every decennial census. “Section 5 was relevant.”

It even goes beyond maps. The statue was equally relevant in 1994, he added, when a proposed local law was nixed by the federal government after the city failed to provide candidate names in Chinese. And, in 2001, the DOJ found that the city’s Board of Elections didn’t give enough prior notice to the Chinese-speaking community about a poll site’s closure in Manhattan’s Chinatown, forcing it to open doors to voters.

Guidelines, as well as precedent, were formed as a result of incidents like those, Vattamala said, and aren’t limited to Manhattan, Brooklyn or the Bronx. The city has tried to use Section 5, he said, as a preventative measure to discriminatory policy that all five boroughs can benefit from.

Opponents of the Voting Rights Act’s provision against racial discrimination argue that the law is outdated and no longer appropriate in a diverse, modern-day America.

“For the federal government to intervene in state and local elections, there had better be a mighty good reason,” wrote Ben Boychuck of the Manhattan Institute in a column on Feb. 28. “In 1965 the reason was clear: the nine states of the Old Confederacy and parts of seven others had raised unconstitutional legal obstacles against black Americans registering and voting.”

Shelby County’s attorneys argue that certain provisions in the Voting Rights Act of 1965 are not only unnecessary but unconstitutional.

“Mr. Speaker, in America, certainly we have come a long way, but we still have a long, long way to go,” Rep. Jeffries said on the House floor on Feb. 25, invoking one of the most racially controversial episodes in America’s race relations. “Jim Crow may be dead, but he has still got some nieces and nephews who are alive and well.”

It’s too early to predict how the Supreme Court will decide the case. That hasn’t, however, put a stop to speculation. After Scalia’s comment on racial entitlements, pundits were quick to assume that the Voting Rights Act would soon be on its way out.

President and General Counsel of LatinoJustice Juan Cartagena said that there are a variety of options before the court. The justices could find middle ground or even send the case back down to a lower court, Cartagena said. Still, as a jurisdiction tied to Section 5, New York City will have to adapt if the anti-discrimination measures are stricken down — including through lawsuits involving other parts of the Voting Rights Act.

Supreme Court Justice Anthony Kennedy alluded to as much during his questions to Shelby County counsel Bert Rein. The justice asked Rein if lawsuits brought about through Section 2 of the law are cost-effective and timely as opposed to Section 5’s preventative measures. Rein argued that Section 2 lawsuits don’t have the stigma for states that preclearance and prior restraint have.

Cartagena disagreed. “It would place the onus on organizations like ours to bring about expensive lawsuits,” he said, referring to the ability to bring about lawsuits based on Section 2 of the law. “The cost of preclearance is a lot less than lawsuits.”

While the public debate continues, and while the Supreme Court ponders its decision, jurisdictions haven’t stopped working on election law.

Cartagena said that this year’s shifting of the 51 city council districts could very well be the last time that the city requires preclearance from the federal government, given that the Supreme Court usually comes out with before the end of the term in late summer.

While New York waits for the DOJ to review the new district maps, a district court has already weighed in on a request from a New England state to review its compliance with the Voting Rights Act.

AALDEF’s Vattamala said the outcome of that case supports the law’s relevancy. “The statute itself has a mechanism to make sure it’s never outdated,” he said in reference to “bail-outs,” by which jurisdictions subject to the law can opt out if they can prove that they haven’t implemented any voting discrimination practices in the previous 10 years.

New Hampshire did just that on March 1 after a district court’s three-judge panel ruled that 10 of the state’s communities no longer have to request preclearance of its election laws.

Vattamala said New York City could do the same, if not for its record over the years. “New York has a long way to go,” he said.