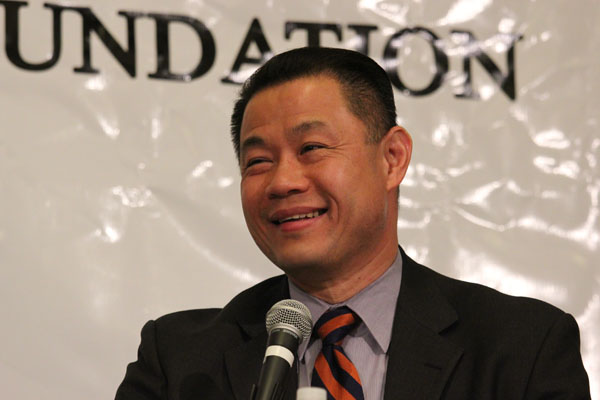 Liu, the latest Democratic candidate to officially announce his candidacy, got some of the loudest applause from the crowd as he reaffirmed his opposition to the New York Police Department’s stop-and-frisk crime reduction strategy.

Liu has said he would end the policy on day one, if elected mayor.

Stop-and-frisk is the focus of a federal trial that got underway earlier this week. In the class action lawsuit, the plaintiffs have argued that the NYPD unlawfully targets blacks and Hispanics with its policy of stopping, questioning and frisking people on the street.

Liu said stop-and-frisk should be abolished.

“There’s a cost in the humiliation that young black and brown men have to suffer,” he said at one point during the forum. “And, of course, there is a cost to taxpayers. We can do better and we will do better.”

Raheem Harley, 54, a local barber who works across the street from the church in Jamaica where the forum was held said he agreed with Liu. “You get much more in life by using honey rather than vinegar,” he said.

Sherri Kaughman, 49, who works for the Department of Social Services, also spoke well of Liu. “He’s on the line with the people in the community,” she said.

The latest in a round of mayoral forums, hundreds of New Yorkers packed First Presbyterian Church to hear seven top candidates including Council Speaker Christine Quinn and Republican nominee Joe Lhota discuss crime and public safety. But it was stop-and-frisk that got most of the attention.

While Liu took the most aggressive stance on stop-and-frisk, rival candidates stressed the importance that a good relationship between police and the community can have on improving policing tactics and lowering crime rates overall.

Though the majority of the audience Tuesday night appeared to favorite Liu, some still weren’t 100 percent sold on the candidate but said that the event helped move them closer towards a decision.

“These events are great because they give you an opportunity to actually see the candidates in person, candidates that you might have only heard or read about in the newspaper,” Rodriguez said.

Liu, who currently ranks last out of the four Democratic candidates, according to a recent Quinnipiac University poll, needs every vote he can get. A federal investigation into his campaign’s fundraising, including the arrest of two aides, may also have hobbled his prospects.

But Liu was the by-and-large the audience favorite of the night, and even some of the youngsters in the audience were cheering him on.

“I think tonight was a big deal at refreshing our mind of what’s going on in our community, but also all over the city,” said Jahkai Smith, 11, a fifth grader at P.S. 13 in Brooklyn who recently participated in a stop-and-frisk panel at his school with the Amsterdam News.

Sharron Kennedy Frost, a teacher at P.S. 13, said that even some of her fifth graders have been stopped and frisked. She brought Smith and two of her fellow fifth graders — Reinaldo Bermudez and Kayla Smith — to the forum “to be aware of the candidates and their positions.”

“These kids are going to make decisions for me later on in life so I want them to be in tune,” Frost said. “They wanted to speak and ask questions, too.”