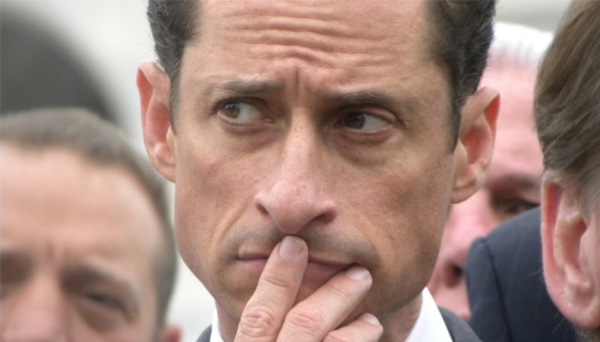 NEW YORK — City Council Speaker and Democratic mayoral frontrunner Christine Quinn confessed to her struggles with bulimia and alcoholism. Ex-Congressman Anthony Weiner appeared to hire a campaign manager for his own bid to be the next mayor. And the latest embarrassment to public integrity in Albany leached into one City Council race.

That and much more — from campaign finance filings to a cameo appearance of former Sen. Al D'Amato — made this week a busy one in the race for City Hall.

VITO LOPEZ — FROM THE ASSEMBLY TO CITY HALL?

Assemblyman Vito Lopez, facing mounting calls to leave office after being accused of sexually harassing several members of his staff, said earlier today that he will leave his seat in Albany at the end of the legislative session in June to focus on his bid for the 34th City Council District.

"Because the citizens of my district voted me back into office last November by an overwhelming majority, I feel obligated to serve out this session of the Assembly," he said in his statement.

But Lopez may be forced to focus on the Council race sooner than that: Assembly Speaker Sheldon Silver, who has faced criticism over his handling of the Lopez matter, said he will move to expel the aging politician from the chamber. And Gov. Andrew Cuomo said that Lopez “should not spend another day in office.”

A special prosecutor said Wednesday that he had found no reason to bring criminal charges against Lopez — at least in Brooklyn — for his unwanted advances on female staff on various occasions.

Lopez, in his statement announcing his resignation, said he was "gratified" by the special prosecutor's decision and added that he had maintained his innocence "throughout this matter" and believed no criminal investigation was warranted.

But on the same day the prosecutor announced his decision, the state's Legislative Ethics Committee released a Joint Commission on Public Ethics report on the sexual harassment complaints brought against Lopez by staffers.

In the days since JCOPE released its report, politicians have called for his resignation, including Frank Seddio, who replaced Lopez as chairman of the Brooklyn Democratic Party.

"He best serves the Bushwick and Ridgewood neighborhoods he's worked so hard to build up by stepping back from political life completely," Seddio said. "He should not let personal ambition stand in the way of their continued progress."

“Because to allow Vito Lopez, after what he did in the state capital, to be allowed into this building to potentially in the name of representing New Yorkers conduct himself in such a horrible way would be an outrage," Quinn said.

That won't stop Lopez from trying, who wrote that the decision on who represents the 34th District, covering the Brooklyn neighborhoods of Bushwick and Williamsburg, should be left to the voters.

"I expect to run a vigorous campaign on the issues facing the citizens of my community and hope to continue to serve them as a member of the City Council," he wrote.

Without saying a word, Comptroller John Liu was met with raucous applause and scattered boos at a mayoral forum organized by the city's largest public employee union last night.

Despite being one of three candidates to arrive late at the District Council 37 mayoral forum yesterday, Liu cued up the audience for even louder cheers when he touched on stop-and-frisk and education reform. DC 37 represents a variety of public sector employees.

While the embattled comptroller didn't have to put much effort to rile up the more than 300 attendees, he sealed the deal when he invoked the federal investigation into his campaign's fundraising tactics.

"Look, they can throw everything and the kitchen sink at me," Liu said as the audience erupted one last time, repeating a line he's used often — before adding: "And I'll be ready for the stove."

Liu was one of five Democratic candidates to show up at the forum, albeit late. Public Advocate Bill and former Comptroller Bill Thompson eventually joined fellow Democrats Erick Salgado and Sal Albanese.

Made up of mostly DC 37 members, the audience was anything but shy as it pushed back against anything that displeased it, including Albanese's defense of mayoral control of schools.

Albanese, a former school teacher and Council member, also tried to lob his usual criticism about how his fellow candidates receive donations from real estate developers. The line was tepidly received by the audience, which reacted much more strongly to de Blasio's defense of public workers and his unabashed attacks on the mayoral race's absent frontrunner.

Council Speaker Christine Quinn was slated to attend the forum yesterday, but canceled at the last minute due to other commitments. Her absence irked the union members, who booed and bristled at the mention of her name. De Blasio added fuel to the flame when he revived his attack on Quinn for her support of 2008's term limit extension.

Whenever DC 37 decides to endorse a mayoral candidate, its executive board will have to mull over three candidates that it already supported in 2009: Bill Thompson's unsuccessful mayoral bid, as well as Liu and de Blasio for their respective offices.

DC 37 might be closer to picking a candidate after last night, but de Blasio doesn’t have to wait any longer for some support from big labor. Late today, the New York Times reported that he picked up the endorsement from SEIU 1199, city’s largest healthcare union.

SHOW US THE MONEY

While the rest of candidates wait for big-ticket union endorsements, they continued to rake in donations as the September primaries get closer.

DNAinfo reported on Tuesday that Thompson led the pack in fundraising totals with $600,000 earned between March 12 and May 11. Fellow Democrat Quinn came in close with $510,000 in the same period, but was out-raised by Republican candidate Joe Lhota's $558,000 in donations.

Both de Blasio and Liu raised less than half of what Thompson reportedly brought in: the public advocate reportedly raised $240,000, and Liu with $104,231.

Meanwhile, rumored mayoral candidate Anthony Weiner reported no campaign contributions. Even so, the former Congressman has more than $4 million on hand and other signs are beginning to point to his official candidacy for mayor.

WILL HE OR WON'T HE?

Politico reported this week that Weiner was bringing in campaign manager Danny Kedem to help revive his political brand.

Kedem previously worked on the failed campaign to unseat Republican Rep. Michael Grimm from his Staten Island congressional seat, and as a field organizer for Hillary Clinton in 2008.

Kedem couldn't be reached to confirm.

Weiner, who also allegedly hired an unnamed press secretary, was most recently spotted near his childhood home in Park Slope with his wife and a film crew, supposedly making what's assumed to be a campaign video.

Republican Senator Al D’Amato made a surprise appearance in the mayoral race when he mocked Quinn after confessed to The New York Times that she previously suffered from alcoholism and an eating disorder.

D’Amato took to NY1’s Road to City Hall and called Quinn a "political hack" for trying to "soften her image."

Quinn’s campaign responded with a force that it hadn’t previously shown, sending out an email yesterday that directly linked D’Amato’s comments to Thompson’s campaign.

The former comptroller tried to build some distance between him and D’Amato’s comments, calling Quinn’s revelation "touching" and "inspiring."

Seemingly unconvinced, the Quinn campaign sent out an email to supproters lambasting Thompson for his alliance with D’Amato, who has been one of his strongest allies.

"The last thing Democrats are looking for in a mayor of New York is someone who is 'proud' to have Al D’Amato’s support," the email said.

That same afternoon, Thompson’s campaign emailed its supporters to launch Women for Thompson with a letter signed by State Board of Regents Chancellor Merryl Tisch and former Public Advocate Betsy Gotbaum.

"This election is about real leadership on the issues women — and all New Yorkers — care about," the women wrote letter said. "For us, the choice is simple. Bill Thompson is the only candidate with the experience and temperament to get things done."