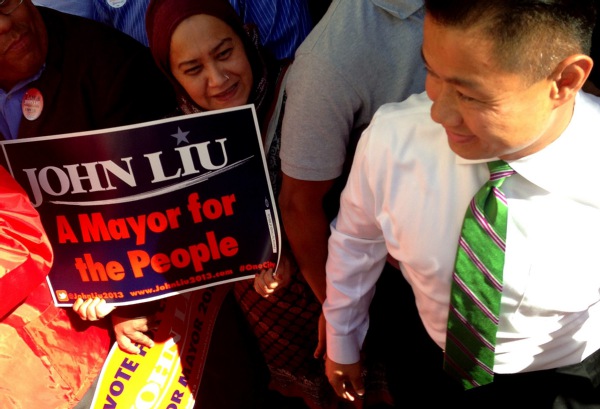 NEW YORK — Even after losing out on millions in public funding for his mayoral campaign, Democratic candidate John Liu is refusing to back out of the race for City Hall.

But he admitted that yesterday's decision by the city’s Campaign Finance Board to deny his campaign matching public funds, after citing irregularities, would take a toll.

"There's no question that this weakens my campaign," he said, as 60 or so supporters stood with him in front of the Municipal Building across from City Hall.

The decision by the board was not entirely surprising given that two of the candidate’s campaign aides were convicted in an illegal fundraising scheme earlier this year. Those convictions failed to dispel questions about the collection of donations by Liu’s campaign. Liu has not been charged or accused in the cases.

Without the public funds and barring any money he can raise between now and the Sept. 10 primary, records indicated Liu had little more than $1.5 million left to spend — leaving him at a considerable financial disadvantage in the jam-packed race for the Democratic nomination.

Liu, who is the city’s comptroller, said that his campaign would strongly consider appealing the board's verdict, but couldn't count on it being successful. Liu and his campaign attorney, Martin Connor, said that even with a successful appeal, it would only give them five or six days to spend the more than $3 million he would have received if not for the board's decision.

Liu, who stood alongside leaders from CWA Local 1180, DC 37 and the Correction Officers' Benevolent Association, was often drowned out by his supporters, who alternated chants of "Mayor Liu" and "Tell us why."

Despite trailing in many of the polls of Democratic mayoral candidates, those alongside Liu were just as eager to answer reporters questions to Liu.

Without any cue or hesitation, Corrections Officers Benevolent Association President Norman Seabrook spoke up for Liu while resting his hand on candidate's shoulder.

Seabrook tried to make the case that the board's political appointments — especially the two made by and Liu mayoral rival and City Council Speaker Christine Quinn — should have recused themselves from the vote.

When a reporter asked Seabrook who he was, the union leader pointed to the cheering and chanting crowd.

Seabrook pressed for responses from Liu’s other rivals too. Only one has publicly acknowledged the hearing: Former Comptroller Bill Thompson told Capital New York that Liu’s candidacy was a question better suited for the voter than for the board.

"You hate to see something happen that way, and you really would much prefer to see the voters decide," Thompson told Capital New York.

But even if the two board members had recused themselves, the vote to deny Liu's matching funds was unanimous. Board Executive Director Amy Loprest told reporters that the decision was based both on the federal cases against the former Liu campaign as well as an independent investigation paid for by the CFB.

That investigation, the board said, uncovered a pattern of behavior similar to the federal cases.

The board's chair, the Rev. Joseph Parkes, said the potential violations were "serious and pervasive," and put the blame squarely on Liu.

"The candidate is ultimately responsible for the campaign’s compliance with the law," said Parkes' statement, citing the 1988 Campaign Finance Act. "The choice to withhold payment does not require a finding that the candidate has personally engaged in misconduct, however. Under the act and board rules, the actions of a campaign’s treasurer or other agents are legally indistinguishable from the campaign."

To that end, board members argued, their conclusion isn’t a slight to the donors whose funds would not be matched. The responsibility to donors to follow the law, Loprest said, isn’t on the board but rather on the campaign.

During yesterday’s public meeting, Connor admitted that the Liu campaign had suffered it’s shares of setbacks, but that the greater number of Liu's 6,259 individual contributions should still be eligible for matching funds.

Connor also argued at the meeting that the board had violated its own rules by only giving Liu eight days to respond to complaints about invalid matching claims. Comparatively, Connor said, other campaigns had 32 months to correct information on what he argued were technical mistakes.

He also argued that the independent, 139-page report conducted by Thacher Associates, LLC., incorrectly interpreted finance law and discriminated against donors based on presumed income levels.

The board did not respond to inquiries about the report's timeline.

Regardless of the report's criteria, however, Connor argued that the board's penalization of the campaign and donors because of two individual's misdeeds could be the Liu campaign's final blow.

"A complete denial of matching fund is the equivalence of imposing the death penalty for pickpocketing," Connor wrote in response to the Thacher report last week. He again invoked the death penalty metaphor at the hearing.

Some Liu supporters said they would work to raise more funds outside the public matching system.

Peter Killen, 75, was one of at least seven Staten Island residents and Liu supporters at the public meeting. Having donated $300 to the Liu campaign since late 2012, Killen — a retired police officer — said he was still committed to seeing Liu win the race.

"It was a kangaroo court," he said of the board, adding that he was surprised and disheartened by the ruling. "I'm going to try to get 5,000 more people to donate the maximum to make up for this travesty of justice."

Liu himself seemed equally resigned to the verdict, telling reporters that he wouldn’t “cry over spilled milk.”

"If any other campaign had been put up to this level of scrutiny by the Campaign Finance Board or by anybody else, I have no doubt that we would be head and shoulders above the rest in the amount of documentation," he said. "There's no question that there are some pretty powerful forces in this city who do not want me to be mayor."