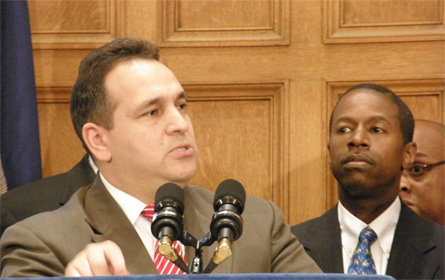 On Tuesday night around 9:30 p.m. Sen. Hiram Monserrate was expelled from the New York State Senate. All it took was a show of hands.

It came down to a vote of 53 to 8. The nay votes all came from Democrats: Monserrate himself, Conference Leader John Sampson, Majority Leader Pedro Espada Jr., Ruben Diaz, Carl Kruger, Kevin Parker, Eric Adams and Martin Malave Dilan all voted against expelling Monserrate. An alternative measure would have delayed Monserrate's expulsion until June, giving him time to appeal his misdemeanor conviction for dragging his girlfriend down a hallway after she suffered severe cuts on her face. That measure did not come to a vote.

Monserrate plans an immediate legal challenge with the help of civil rights attorney Norman Siegel. Legislators haven't expelled one of their own for decades.

The show of hands was simple, but the debate beforehand and the results of Monserrate's expulsion are anything but.

Overflow crowds flocked to the viewing galleries at noon as the session began. Some of the onlookers joked it was like attending a public execution. But they were in for a long wait, as the Senate considered a number of bills on other matters and then recessed to conference on what to do about Monserrate. The crowds slowly dissipated as it became clear that consensus would not be reached quickly.

Democrats holed up for hours behind closed doors and held what Sen. Neil Breslin described as an "animated" debate. Reporters who waited outside the chamber could hear shouting before the outer doors were finally shut and locked.

A number of senators reported that the Democratic conference was evenly split (16-16) about whether to expel Monserrate immediately or to give him until June. Leaving Monserrate in place until June would made sure that Sampson would have the 32 votes he needs to pass anything for the rest of session. Sampson offered the measure that would have let Monserrate remain until then.

Gov. David Paterson announced after the vote that he will call for a special election on March 16 to fill Monserrate's seat. Monserrate has promised to run to get his seat back. If he does, he will probably face Assemblyman Jose Peralta, who enjoys the support of the Queens Democratic establishment.

Monserrate and his allies have attacked the way the Senate, which named a special committee to consider Monserrate's situation following his conviction, carried out its inquiry. They say it was all part of a political agenda, spurred partly by Monserrate's defection from the Democrats during last year's Senate coup.

Monserrate pledged to contest the legality of the expulsion.

Sen. Eric Schneiderman, who chaired the select committee that recommended Monserrate's expulsion, said that the Senate has every right to expel a member. He cited Legislative Law section 3, which states, "Each house has the power to expel any of its members, after the report of a committee to inquire into the charges against him shall have been made."

"Due process was followed, justice was served," said Schneiderman. He issued a statement following the vote to defend his committee and Monserrate's expulsion. "Make no mistake about it, this is a sad day for the Senate," read the statement. "The expulsion of a senator is a rare action that ought to be considered only in the most egregious of circumstances, but I believe the conduct of Sen. Monserrate -- his disregard for the law and for the safety of others -- meets that standard. Sen. Monserrate has not been honest about the events that led to his arrest and conviction, and, to this day, refuses to accept responsibility for his criminal conduct."

A Majority of One

While there is concern among some legislators about what the temporary absence of one Democratic vote -- and the lack of the required 32 vote majority -- might mean to the body, a number of observers are not terribly concerned. Lobbyists and good government advocates point out that the Democratic majority hasn't exactly been steam rolling out bills, and things in the legislature won't really heat up legislatively until late March, when the budget deadline draws closer.

However, some still express concern that no matter how quickly Monserrate is replaced, his allies - -Diaz, Espada, and Carl Kruger -- could make it almost impossible for the Democrats and the Senate as a whole to accomplish anything, if the three decide to retaliate for Monserrate's expulsion.

Only three members chose to explain their votes on the floor. Diaz raged against what he saw as the hypocrisy of expelling Monserrate. He said that any number of legislators have been found guilty of corruption and misdemeanors but were not expelled. He said the Democrats had begged Monserrate to return during the coup, "Just to make a fool of him and put him to shame."

Lt. Gov. Richard Ravitch, who was presiding over the session, interrupted Diaz, who had exceeded the time limit, asking him, "How do you vote?" Diaz responded, "You ask me how I vote? I vote against all these people!"

Espada began by saying he wanted to "voice support for our fair and just leader John Sampson." Then Espada referred to a vote earlier in the day on a resolution to demand that terror trials not be held in Manhattan. Several senators, including Liz Krueger, stood to argue that combatants should be granted the rights of the American civil legal system. Espada said that those members could find it in themselves to afford terrorists due process but refuse to give Monserrate "due process rights."

Finally, Monserrate stood to defend himself. He told the chamber the Senate had not afforded him due process, and insisted, "We don't have the power to expel a member.” He also warned that any other senator could be next: "I will be voting no on this resolution. I will encourage every member of this chamber who believes in fundamental fairness and can put to the side the politics and the heated discussion of the issue and say, 'it's Hiram Monserrate today, it can definitely be me tomorrow.'" He said the vote to expel him was effectively "disenfranchising the voters of my majority minority district."

"I think it’s the height of arrogance for someone who has never pulled a lever in my community -- never saw the narcotics sales on Roosevelt Avenue, never saw the lack of services that my community receives -- to think that today they have more power than the constituent voters that sent me here to represent them," Monserrate said before asking for his colleagues to, "Let the people come this fall. Let them be the final word on the matter of Hiram Monserrate."

No one interrupted Monserrate's, 16-minute speech, and when he finished, the vote tally was read. Monserrate had been expelled. Senators quietly moved toward the exits. Monserrate stood near his, getting hugs from some colleagues, receiving conciliatory pats on the back from others.

Liz Krueger, the first Senator to openly call for Monserrate's ouster, made her way out the door away from where Monserrate was standing. "It was a long process, but you got the result you wanted. Are you satisfied?" she was asked. She paused briefly and replied, "We did what we needed to do."

Marcia Pappas of the National Organization for Women-New York State hailed the vote. "For over a year The National Organization for Women-New York State has repeatedly sent the message that anything less than expulsion was not acceptable. Any form of violence against women is not acceptable. We hope that this serves as a wake-up call to all lawmakers. Whether you are a candidate or a sitting elected official, if you are violent toward another person, you are not fit to hold office."