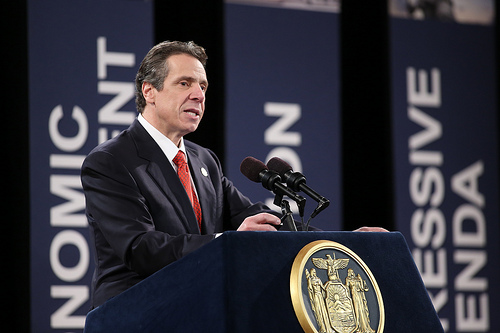 Gov. Andrew Cuomo told reporters yesterday that he won't weigh in on the New York City mayoral primary after receiving multiple questions about Public Advocate and Democratic mayoral frontrunner Bill de Blasio's plan to raise taxes on the wealthy to fund school programs. "I am going to stay out of the New York City mayoral," Cuomo said. "Let's find out who the mayor is and what policies they actually put forth, and then let's take a look at them and consider them, and we'll have an opinion." De Blasio, who has a long relationship with Cuomo, has publically pressured Cuomo on plans to save a number of failing Brooklyn hospitals. Cuomo has avoided major appearances in the city this summer--including the West Indian Day Parade. Cuomo has held numerous events upstate and in Western New York. Some pundits see Cuomo's reluctance to engage in the race as a way for him to avoid having his name associated with the likes of Anthony Weiner and Eliot Spitzer. Cuomo told reporters yesterday that things aren't that complicated. "I'm not registered to vote in New York City, so I don't think it's a situation where it's appropriate for me to express a preference."

Thompson Struggling to Define Himself With Voters (Daily News)

What Can The Next Mayor Do About Affordable Housing? (Capital)