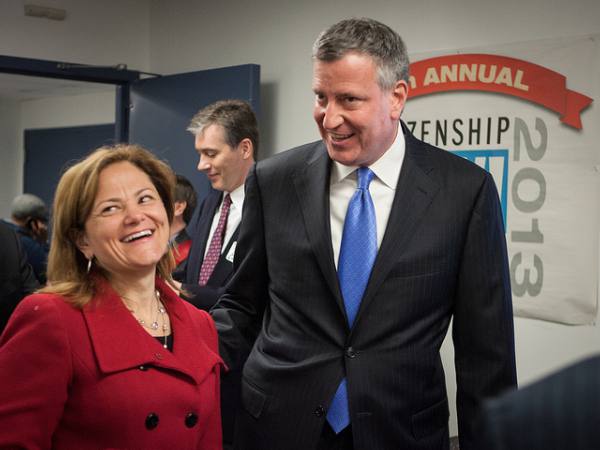 NEW YORK — They all wanted the Latino vote.

During this year’s high-stakes scramble to win their primaries, Republican and Democratic mayoral candidates alike vied for a piece of the second-fastest growing voting bloc in the New York City.

They made campaign appearances in front of Spanish-language audiences, and were asked about their taste for fried Puerto Rican eats known as “cuchifritos” during the first televised mayoral debate on Latino issues. Mailboxes were teeming with bilingual mailers, and airwaves were flooded with targeted Spanish-language ads.

Candidates with the most clout racked up endorsements from leading Latino figures, deploying them as surrogates across the five boroughs.

And then there was the candidate who swept them away.

Bill de Blasio’s message of fairness and equality was just as powerful with Latinos as it was with almost every other demographic group in New York. The amount of time and money the campaigns spent on wooing the Latino vote didn’t wake the “sleeping giant” as the voting bloc is often referred to — and turnout among Hispanics remained low. Even so, de Blasio's vision for a post-Bloomberg era sealed the deal with most of those who did pull the levers.

Exit polling by Edison Research showed he earned 38 percent of the Latino vote. But Latinos only made up 18 percent of those polled. That’s a far cry from the 40 percent of the electorate that Latino leaders want to activate before the Nov. 5 general election.

As committed as the candidates were to getting out the Latino vote — some more than others — the hundreds of thousands spent on bilingual advertising and scores of endorsements by Latino power brokers did little in the face of a message steeped in the idea of justice for all that some view to be divisive.

“Economic and social justice,” said Fernando Ferrer, the first and most recent Latino candidate to earn the Democratic nomination for mayor. “That’s what the message is about, and the two pillars of that were economic fairness and stop and frisk. It’s deep-rooted in principles that are deeply American.”

But while Ferrer had used a similar concept in his 2001 and 2005 bids for mayor to varying degrees of success, the message played out more effectively this year as the election largely became a referendum on Mayor Michael Bloomberg’s tenure.

Ferrer said that the biggest difference between his use and de Blasio’s interpretation was that it was accepted as truth within the Democratic field this time around.

A Bill Thompson supporter and surrogate during the primary, Ferrer now backs de Blasio — joyfully so, he added. That tried and true nature of the “tale of two cities,” Ferrer said, was just as relevant on Sept. 10 as it was during his turn on the ballot.

“What it says to me is that income and social inequality didn’t just happen in the last two months,” he said. “In fact, it’s only gotten deeper and worse. Voters want a candidate who’s not an apologetic for those who want to deepen this chasm.”

A traditional and direct appeal to Latinos might not mean much when the general election opens up to what is expected to be more than 1.2 million voters. De Blasio’s primary win proved a focused, compelling message could win in a crowded field of competitors.

"What he had was something far more potent," Ferrer said of de Blasio. "And good for him."

Another candidate who hasn’t outlined any sort of strategy specific to the Latino vote is Republican Joe Lhota. While his former primary rival, supermarket mogul John Catsimatidis, counted on his “love factor with the minorities,” Lhota has avoided overt appeals to Latinos beyond the occasional parade.

His staunch defense of stop-and-frisk might dissuade some Latinos from voting for the former transit chief. But his fiscally conservative take on the city may appeal to small business owners and might secure some support within a community that can be as ideologically diverse as any demographic.

Any which way, it’ll be a climb for Lhota. The most recent Marist Poll had 74 percent of likely Latino voters behind de Blasio. Eleven percent back Lhota, who has attacked de Blasio’s messaging as “divisive” and “class warfare.”

The Lhota campaign did not respond to the Gazette’s requests for comment.

Unlike many of his Democratic rivals, de Blasio didn’t line up the number of Latino surrogates that former comptroller Bill Thompson or even City Council Speaker Christine Quinn did. Bronx state Assemblyman Luis Sepulveda and Harlem City Councilwoman Melissa Mark-Viverito were early de Blasio supporters and remained the most prominent Latino endorsers through the end of de Blasio’s primary campaign.

Mark-Viverito said she wasn’t surprised with de Blasio’s ability to connect the campaign’s message with a wide swath of New York, Latinos included.

“That’s what appealed to me,” she said, affirming that the campaign’s strong digital and ground presence on top of its media presence helped reach a broader audience.

{pullquote}Just like a lot of the newspaper endorsements, those from Latino leaders just weren't all that important -- Angelo Falcon{/pullquote}

The domino effect of Latino endorsements began when Bronx state Sen. Gustavo Rivera announced his support for City Council Speaker Christine Quinn in April and then joined her on multiple walking tours of the borough to meet voters.

After Quinn endorsed de Blasio in front of City Hall last week, Rivera affirmed his support for the Democratic mayoral nominee, and that a de Blasio administration would be an inclusive one.

“I believe that will happen,” he said. “Ultimately, we will have much more to say about what’s going on in this city than we do now.”

More of Quinn’s Latino supporters have also joined the newly unified Democratic party for de Blasio. Among them is the influential union that represents more than 120,000 building workers, 32BJ SEIU, and its president Hector Figueroa.

Last week, Figueroa committed to help turn out the vote for de Blasio on behalf of the heavily Latino union.

“He’ll have a seat at the table for Latinos,” Figueroa said. “But we should never take anything for granted. We have to earn it. His heart is there, and that’s something we need to reciprocate with our votes.”

Calling Quinn a sister in the progressive cause, 32BJ’s PAC spent at least $45,800 on her campaign to be mayor. Overall, the union's PAC reported spending more than $286,000 on electioneering that mentioned Quinn in some fashion.

The closer New York got to the September primary, the more reports were coming out that Quinn — whose early lead in polls collapsed and left her running third behind de Blasio and Thompson — was counting on help from many of the Latino Council members behind her and allies in state government.

But it wasn't enough, said Angelo Falcón of the National Institute for Latino Policy.

"Just like a lot of the newspaper endorsements, those from Latino leaders just weren't all that important," he said, adding that what he sees as a vacuum in Latino leadership within the Democratic party doesn't help.

Nor did it help that most major polling didn’t consistently track Latino voters. Still, DNAinfo.com reported the day before the primary that Quinn was counting on the Latino outreach to secure her a spot a runoff.

By the early morning of Sept. 11, return showed Quinn at third in the primary. Exit polling revealed she received 14 percent of the Latino vote.

At least three of Thompson's political supporters ran their own ground operation on election day, which yielded mixed results. Two of them, Brooklyn state Sen. Martin Malave Dilan and his son, Councilman Erik Martin Dilan, represent segments of Bushwick, Cypress Hills and parts of both East New York and Brownsville. By and large, the Dilans delivered their districts to Thompson.

Across the East River, however, Thompson supporter state Sen. Adriano Espaillat, worked through his own Northern Manhattan Democrats for Change political club to turn out the vote in his heavily Dominican Spanish-speaking district, which mostly covers Washington Heights and Inwood.

Supporting a mostly successful slate of candidates across the ballot, including fellow Thompson supporter Councilman Ydanis Rodriguez, the vote in both neighborhoods was effectively split between de Blasio and Thompson.

The same can be said about most of the Bronx, where many of Thompson's supporters operated from and which is still seen as the geopolitical stronghold for Latino political leadership.

Even being a Latino Democratic candidate amounted to little. The conservative minister Erick Salgado eked out 15,530 votes or 2.4 percent of those cast in the primary.

“I believe he got more Russian votes than Orthodox votes or Spanish votes,” said Salgado-backer and Russian media impresario Gregory Davidzon to the New York Observer. “The Latino community really is a sleeping giant.”

The persistent question is if that giant will wake up in time for Nov. 5. If it does, Independence Party candidate Adolfo Carrión thinks he can turn some votes in his direction. He joined Salgado at a presser the day before the election in a last-ditch attempt to galvanize Latino turnout.

"We can be a driving force in electing the next mayor,” Carrión said in a statement at the time. Guaranteed a spot on the ballot, the former Bronx borough president has long argued that an active Latino voting bloc could swing the election.

Whether it swings it in his or even Lhota’s direction is too early to say. For now, de Blasio’s new allies want to at least keep Latinos on track to push the first Democrat into Gracie Mansion in two decades.

Last week, 32BJ’s Figueroa said it will be a challenge to make sure the momentum continues in spite of what he described as a sense of inevitability. Part of that push, he said, was to make sure the Latino electorate understood the importance of its vote and de Blasio as an agent of change for the community.

“He needs to work on his Spanish,” Figueroa said jokingly. “He’s trying hard, but we will make sure that he understands Latino voters in whatever language we speak.”