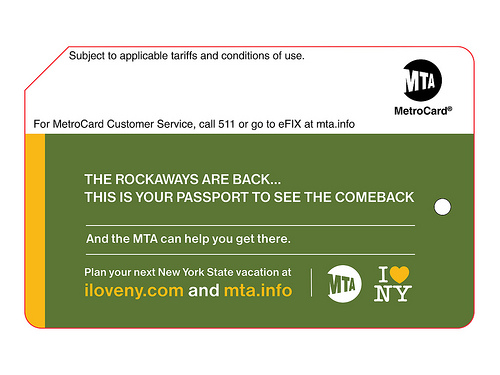 Gov. Andrew Cuomo is marking the first anniversary of Hurrican Sandy by giving free subway rides to residents of the areas hardest hit by the storm. Free rides will be availble on Tuesday, Oct. 29, for riders entering stations on the A subway line between Howard Beach and the Rockaway Peninsula and stations on the R subway line between Bay Ridge-95th Street and Court Street.

On the one year anniversary of Superstorm Sandy we want to thank New Yorkers who made it through the storm with both resilience and good spirits," Governor Cuomo said. "Superstorm Sandy was particularly difficult for New York City and Long Island, but the patience, the kindness, and good nature of New Yorkers helped our state in the immediate aftermath and over the past year as we have been rebuilding our communities. These free rides are a thank you to the MTA riders in the Rockaways in Queens and those who use the R train in Brooklyn for taking the hardships of the storm in stride and for their understanding in the months since.

Cuomo unveiled the "Come See the Comeback" campaign to boost tourism in the areas hardest hit by Sandy. There are newly designed MetroCards highlighting Staten Island, the Rockaways, Howard Beach, Coney Island and Long Beach. The Rockaways card is featured above.