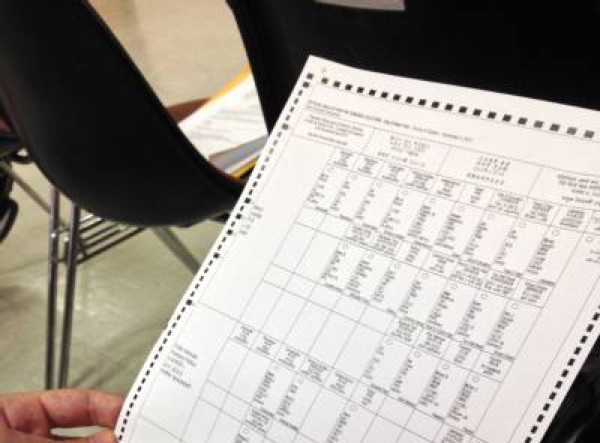 A week after 1.3 million New Yorkers cast their ballots in the general election, the city’s Board of Elections celebrated the speed with which it had reported the results while also announcing it was making preparations for next year’s races.

This year’s election on Nov. 5 was the first time that the board had used the USB devices — or PMDs — housed within the optical ballot scanning machine to report initial results. It was a major technological leap from the previous method of cutting and taping together paper rolls and counting tallies in election districts by hand.

That low-tech system got the BoE in trouble in 2012 when a number of districts in reported zero votes in the Congressional race between Rep. Charlie Rangel and state Sen. Adriano Espalliat.

“All of those zeroes on return of canvass sheets, all of those go away with the PMDs,” said BOE Executive Director Michael Ryan at Tuesday’s public meeting of the board’s commissioners.

{pullquote}All of those zeroes on return of canvass sheets, all of those go away{/pullquote}

He also praised the accuracy of the results returned through the devices, saying they “absolutely helped.”

The administration of last Tuesday’s balloting which led to the landslide victory of Mayor-elect Bill de Blasio was widely regarded as not-so-bad given the reputation of the BOE for Election Day blunders.

Some complaints this time around involved the excruciatingly small typeface on the ballot, which Ryan pledged to prevent from being used again.

“That clearly was one of the biggest problems we faced,” he said.

Double-sided in 6-point font with an unprecedented number of open seats, the ballots raised the ire of election onlookers and voters alike.

Ryan repeated an earlier promise to get a sample ballot for the 2014 gubernatorial race to the commissioners before February so they can avoid similar criticism over font size.

The early planning will theoretically put the board ahead of schedule.

Ryan also announced the board had been invited to speak at a public hearing on Dec. 9 organized by the Assembly’s election law committee, which is entertaining moving the state primary up in the calendar to June beginning 2014. The commissioners didn’t engage on the proposal.

A committee hearing on the bills is set for Nov. 21. A board spokeswoman confirmed that the BOE had been invited to testify.

It’s unclear whether either bill will make it to a floor vote before the new administration is inaugurated. Outgoing City Council Speaker Christine Quinn previously supported instant runoff voting.

Mayor-elect de Blasio has only offered measured interest in the idea.

“I’m not comfortable with it at this point,” de Blasio told WNYC’s Brian Lehrer during the campaign. “It's, I think, an idea that is founded in good intent but there's a number of specifics that I can't agree with, as least as it's written now."