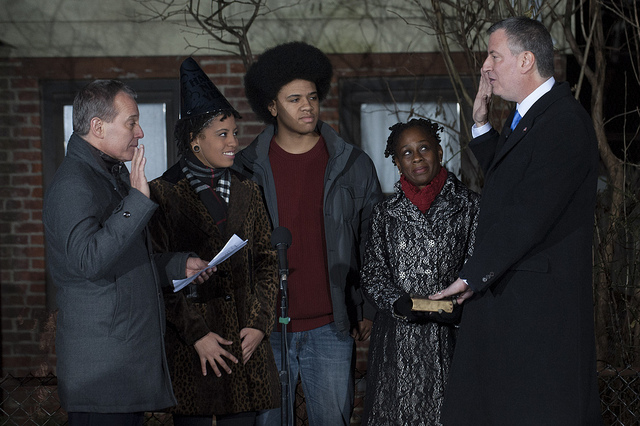 Bill de Blasio was sworn in as the city's 109th mayor just after midnight on Wednesday during a ceremony at his family's home in Park Slope, Brooklyn, where he launched his campaign for City Hall nearly a year ago. State Attorney General Eric Schneiderman delivered the oath of office as a crowd of supporters and journalists watched. De Blasio was accompanied by his wife Chirlane, daughter Chiara and son Dante. He paid a $9 filing fee.

De Blasio will also be sworn in during a formal inauguration officiated by President Bill Clinton on the steps of City Hall at noon. Public Advocate-elect Letitia James and Comptroller-elect Scott Stringer will also celebrate their inauguration at the event on Wednesday.

NEW IN THE GOTHAM GAZETTE — The New Yorker's Guide To The New City Government: The historic overhaul of New York City government this year goes well beyond the mayor's office. Here's a look at some of the new — and familiar — faces of the fresh crop of elected officials. By Caroline Lewis. READ MORE.

ALSO — Now Get To Work! Readers Offer Advice To The New Mayor: The crowdsourced submissions to our "Minute With The Next Mayor" project touched on affordable housing, unemployment and homelessness,  transportation, public health and the preservation of libraries. By Meral Agish and Valentina Cordero.