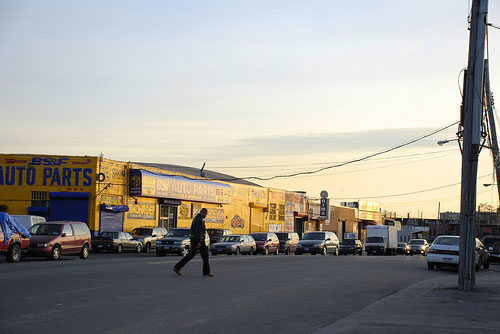 Photo (cc) Sam Galison. A street in Parkchester in the 76th district.

Rivera’s Democratic opponent, Luis Sepulveda, an attorney who has worked for Sens. Ruben Diaz and Pedro Espadaand has experience in constituent services, continued to speak over Rivera, asking him about using campaign money for vehicles and about contributions he has received from insurance and pharmaceutical companies, all while smiling broadly.

Rivera responded by referring to his various Assembly appointments and to his position as fourth in line for the governorship as speaker pro tem of the Assembly. Sepulveda attacked Rivera for at one time owning a business that brought "seedy clubs" into the district. "That's the kind of campaign he is gonna run," retorted Rivera. "Dirt, dirt, dirt!" Later he called Sepulveda a jerk.

So far, the campaign for the Assembly District, which includes West Farms, Parkchester, Van Nest and Castle Hill in the Bronx, has not been particularly substantive. Axelbank, who is host of Bronx Talk, said the August 9 debate left him wanting real substance. "I think Louis is a fierce challenger and legitimate opponent. But I think he had a real chance to address Peter Rivera's record, and I think there are some real holes there. But he didn't take advantage. People didn't like how they both came off."

If you listen to Sepulveda, Rivera is a typical corrupt career politician who has "advanced his own standing while being neglectful of his district." Notoriously, Rivera has been cited in a number of reports for having spent $54,000 worth of campaign funds on a Mercedes. That is not illegal, but Sepulveda wonders why Rivera couldn't have spent the money on something more practical, "like a Toyota or a Hyundai." Sepulveda has sent out mailers attacking Rivera on the issue. Rivera says that he travels all over the state and country in his work as a member of many national organizations and state committees. He says he has spent a lot of money on transportation over his 18 years as an elected official.

Fox Chases Hevesi: Attorney Joe Fox is trying to bring the anti-incumbent sentiment sweeping the nation into a race in Queens. His competitor, Assemblyman Andrew Hevesi, isn't buying it.

Sepulveda also says that Rivera has taken a large amount of campaign contributions from the insurance and pharmaceutical industries, and he stood in the way of the creation of a preferred prescription drug list for Medicaid. That list is used in other states to drive down costs and pressure pharmaceutical companies to lower their prices if they want Medicaid to pay for their drugs. Rivera told the New York Times in 2006 that his opposition was not based on donations he had received. "I am not doing this because I am in the pocket of the pharmaceutical companies,'' he told the Times, explaining that he didn't want to limit the kinds of drugs the poor have access to. ''I am doing this because it's the right thing. The governor is trying to balance the budget on the backs of poor people."

According to Rivera, Sepulveda "is the alter ego of Senator Ruben Diaz." He says Sepulveda was the only man Diaz could find to run against him and is doing it to send a message. "What's the message?" asks Rivera. "Either play ball or get out of this district!"

"He isn't saying, “Vote for me because I am the most qualified candidate.’ He is saying, â€Don't vote for Peter Rivera.'"

Rivera insists that despite his relationship with Diaz he started the campaign on his own and won Diaz's support through his hard work.

"There are some cynics who say I was put up by the senator," said Sepulveda, "but neither the senator nor chairman Carl Heastie knew I was going to run. I worked hard, and now I have the senator's support."

Sepulveda says he knocked on his first door on February 28, and has since knocked on 18,239 doors. He says his support in the community is growing in part because he has targeted traditionally ignored voting blocks like the district's Bangladeshi community.

"When I first started, Rivera called me a lightweight, a trial balloon, but I think things have changed," he said.

During a recent campaign outing with Diaz and Sepulveda, Diaz said that even if Sepulveda did not win he would be happy to "send a message."

"Friends ask, 'Why is he being so negative,'" said Rivera. "If you say 20 years of service is a waste of time you better be able to explain why."

Diaz himself is challenging Ken Padilla for his position as the leader of the 76th Assembly District. Padilla said Diaz's challenge to him and Sepulveda's run against Rivera are similar. "The senator put someone up against Peter Rivera--his counsel [Sepulveda]--to say this is what happens if you don't play ball: we will replace you."

One major source of contention in the race is Sepulveda's stance on gay marriage. During the debate on the 9th he said he would want to see the legislation before he voted on it. Rivera countered that the legislation has been the same year after year. 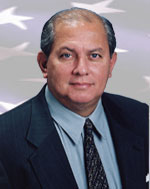 Sepulveda did not exactly make his stance any clearer during an interview with Gotham Gazette.

"What I've told people is I am not going to take a position on that until I see the legislation," said Sepulveda. I did not like the shape it took last time."

When asked what he didn't like about the legislation that came to a vote last year, he didn't elaborate. "I would prefer if they took it to a referendum," he said. "I am not going to say I am against gay marriage. I have a brother who is gay, so I understand the issue.

But I think it would be more productive if they brought it to a referendum."

He explained that he didn’t think the "the way activists have been going about this" has been helping. "You can't force the issue down the throats of the conservatives

and evangelicals," he concluded. Rivera supporters point to his Sepulveda's undefined stance on gay marriage as proof that he is beholden to Diaz who has lead a crusade against same-sex marriage.

Rivera voted in favor of same-sex marriage and says he would do it again.

When asked what he thought the main issues are for the district, Rivera wasn't very specific. "The people of the district will find out what the issues are in the coming days," he said. He put blame on legislative inaction on the senate, saying the senate should get the blame not the "legislature."

Rivera too didn't offer many particulars when asked what he would like to see approved in Albany to benefit his district. "There is a whole lot of stuff I would like to see passed. We didn't do power for jobs. It is simple things like that."

Sepulveda explained that the district is so diverse that each neighborhood has a number of issues that need to be addressed. One major goal would be to restore the number 14 bus, which runs from Country Club to Parkchester. He would like to see the area around the Bronx Zoo cleaned up. Multilingual education and public safety are also on his mind. He says that, with Diaz, he has drawn up legislation that would mirror the prescription drug plan currently used in Schenectady County. That plan allows residents to present a card to get discounts on pharmaceuticals. The plan has helped seniors bridge the gap between their Medicare coverage and the price of the pharmaceuticals.

And in another dig at Rivera, Sepulveda says he would immediately sponsor legislation that would require campaign finance funds to be "spent only on campaign related costs."

For his part, Rivera clearly thinks his real opponent is Diaz. He said Diaz is definitely trying to tell him to get in line and play ball with him. "Taking orders--that is not a distinguishing characteristic of a good leader. Playing ball is not good leadership," he said.