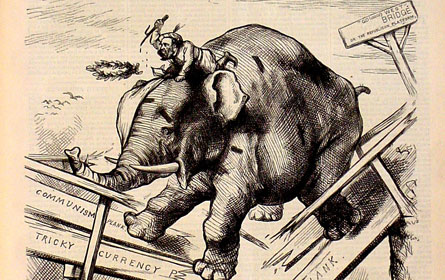 Art from Ohio State University
Thomas Nast drew this cartoon to portray Republican woes in 1877, but it could apply to the New York GOP in 2010.

In 2006, Democratic Attorney General Eliot Spitzer rode his popularity as a crusading attorney general straight into the governor's mansion, with nearly 70 percent of the vote. It was more an anointment than an election On Nov. 2, most analysts think current Attorney General Andrew Cuomo could enjoy the same sort of ascent to the governorship.

Cuomo appears to have a commanding lead even though the Democrats have had a rocky four years in Albany. Democratic Gov David Paterson declined to run for election in a fugue of scandal. Dem Sen. Kirsten Gillibrand, appointed to her seat by Paterson, was supposed to be weak, an easy target for both better known Democrats and Republicans. State Comptroller Alan Hevesi had to resign after being reelected. And fighting among State Senate Democrats shut down the body for several weeks in 2009.

Add to all that that this is supposed to be the year of the Republican comeback. It still is nationally, but in New York the Republican Party has faltered in its effort to find high-profile candidates.

Unlike Spitzer in 2006, Cuomo has no primary challenger. The biggest barrier between Cuomo and victory will likely come from the winner of the Republican primary between former U.S. Rep. Rick Lazio and wealthy Buffalo businessman Carl Paladino

The two big-name Republicans many in the party hoped would challenge Gillibrand -- former Gov. George Pataki and former Mayor Rudolph Giuliani -- never got into the race. Instead, there are three obscure Republican candidates: former Westchester Congressman Joe DioGuardi, onetime Treasury Department official David Malpass and Long Island attorney Bruce Blakeman. None of them are thought to have a great chance against the extremely well funded Gillibrand.

Two equally obscure Republicans are competing for the daunting challenge of taking on New York’s senior â€“ and very well funded and powerful â€“ Sen. Charles Schumer. The party does seem to face better odds in the two other statewide races where neither of its candidates -- Harry Wilson for comptroller and Daniel Donovan for attorney general -- faces a primary.

Figuring out who would run on the Republican gubernatorial ticket has been a messy process. Republican Party chair Ed Cox, unimpressed with Lazio’s early campaigning, urged Suffolk County Executive Steve Levy to enter the race even though Levy was a Democrat at the time. After bitter internal fighting and a disjointed convention, Lazio won the Republican nod. Levy bowed out. Paladino, however, was just gaining steam.

Why are the state Republicans flapping their arms in the wind in what is expected to be a benchmark year for Republicans nationally?

"It’s because Pataki didn't build infrastructure. He didn’t build up the party itself. And the leadership is self centered," said Baruch College Professor Doug Muzzio. "{Former party chair Joseph] Mondello was a disaster and {the current one, Edward] Cox isn't much different. But it has to do with who is in the team and on the bench. The stars Pataki and Giuliani wisely bowed out."

Carl Paladino has taken on the role of the Tea Party candidate, the outsider who is "mad as hell" at Albany dysfunction. But Paladino is not exactly an outsider; he has used his wealth to fund a wide array of Albany politicians, Republicans and Democrats alike. His business relies on contracts from the state. And he has come under attack for a number of extreme positions. 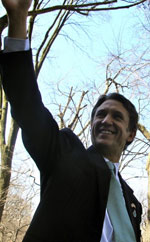 Lazio, a former congressman from Long Island, served as an executive vice president at JP Morgan Chase after his 2000 failed Senate bid against Hillary Clinton. He has come under attack for his ties to Wall Street; his finance chair during his bid for the Senate was Lewis Ranieri, who was on Time magazine’s list of the top 25 people responsible for the financial crisis.

The two Republican candidates are low on cash and poll badly in theoretical match-ups against Cuomo. An August Siena Poll put Lazio and Paladino at about 27 percent to Cuomo’s 65. Lazio maintains a small lead in polls for the Republican primary but has seen his edge steadily shrink. The latest Quinnipiac Poll puts Lazio 12 points over Paladino.

Both candidates have about $500,000 on hand as of September although Paladino recently gave around $500,000 to his own campaign. Cuomo, on the other hand, had $23.6 million in July.

It is expected that Paladino will unleash a massive television campaign in the final days before the primary.

But Muzzio doesn’t think any of it will truly make a difference.

"Forget it! Cuomo doesn't lose unless there is a disaster. This isn't an election -- this should be the lowest turnout ever. It is a snoozefest," he said.

Democrats have been eating up the Republican primary as the two contestants take shots at each other and compete to have the most hard-line policy on the Park 51 Islamic center.

Cuomo has almost become an afterthought in their campaigns.

While Paladino began escalating the mosque debate, even saying he would use eminent domain to seize the property, a look at both candidates' websites make it clear that Lazio has signed on to the cause. Paladino's site features a video titled "Carl Paladino Will Put New Yorkers Back to Work" and a five-point plan to reduce the size of state government. Lazio’s site features a petition demanding Cuomo investigate the mosque, along with the letter Lazio wrote to Cuomo demanding Cuomo debate him about the mosque. It also features an attack on Cuomo’s link to "special interests."

A recent e-mail from the Lazio campaign viciously attacked Cuomo for not "investigating” the mosque." "Cuomo's refusal to do his job is as offensive as imam's suggestion of terrorist activity," read the headline in a quote attributed to Lazio.

"Lazio's campaign is so intellectually bankrupt that he jumps on the mosque issue," said Muzzio. "Excuse me, can you tell me what this has to do with governing?"

Paladino has, both intentionally and unintentionally, cultivated an image as a rural outsider. His first big public splash this year surrounded racist e-mails he had forwarded to colleagues. Since then, he has come under fire for comparing Assembly Speaker Sheldon Silver to Hitler and the Anti-Christ and proposing unemployed black youth undergo training programs in closed prisons.

Recently, Paladino said that “there aren’t many Republicans” in New York City outside of Staten Island and Queens. He said both boroughs could relate to his stances.

Lazio's approach has been far less abrasive, but a number of Republicans say it has been underwhelming and has failed to spark interest. His slogan, "The Status Cuomo," has focused on attaching Cuomo to "special interests" he says have leached money from the state while the current AG has been raising taxes and driving businesses out of state.

While Paladino has appealed to the Tea Party movement.pushing hard right, Lazio has tried to find a place in the middle. He has taken a hard stance against the mosque to appeal to Tea Party voters but he has challenged Paladino on his remarks about putting inner city youth in reeducation camps.

In addition to pledging to stop the Islamic center, both candidates plan to chop Medicaid benefits for the needy, drastically trim state agencies and cut property taxes.

Lazio says he would do away with the pork barrel spending by legislators. He supports a constitutional convention to change the way Albany functions and has promised to veto district lines drawn by legislators, saying he supports an independent redistricting commission. He also advocates a property tax cap of 2.5 percent of the value of every home. And he has committed to giving the city the education funds it won in the the Campaign for Fiscal Equity lawsuit.

Paladino's plan includes cutting property taxes 10 percent by June,2011. He has attacked Lazio's cap as "weak." He pledges to cut the size of state government as a whole -- agencies, departments and staff -- by 20 percent by December 2011.

Paladino has further promised to cut $20 billion from Medicaid in his first budget. "New York offers more gold-plated Medicaid optional benefits than any other state and this is killing our taxpayers," says Paladino’s website. "Carl will cut these optional benefits back to California levels -- still the second most expensive Medicaid state in America -- saving New Yorkers $10 billion in taxes." He also wants to cut business taxes and pass an ethics law with "real teeth."

Lazio has won endorsements from newspapers like the New York Times, the Times Union, the New York Observer and others. But the endorsements were more anti-Paladino than pro-Lazio. The Daily News declined to endorse in the Republican primary -â€“ instead backing Cuomo.

Paladino has tried to turn those endorsements against Lazio, claiming Lazio is the favorite of the liberal media, which have an "agenda."

Whichever one of them loses on Tuesday could still fight on into the general election, thanks to third parties; Lazio has the Conservative line and Paladino has his Tax Payers line

Lazio, though, recently said he thinks there will party unity. Speaking to a rally, in Erie County, he said, "I have no doubt in my mind that once the primary is over, that people who support both candidacies will come together, because I think there is common opposition here."

Muzzio laughs at the idea that the loser in the primary might continue on. "Lazio on the Conservative line? Cuomo is further to the right of him. And what line would Paladino run on? The Tax Payer's? Its a joke. This isn't even an election."