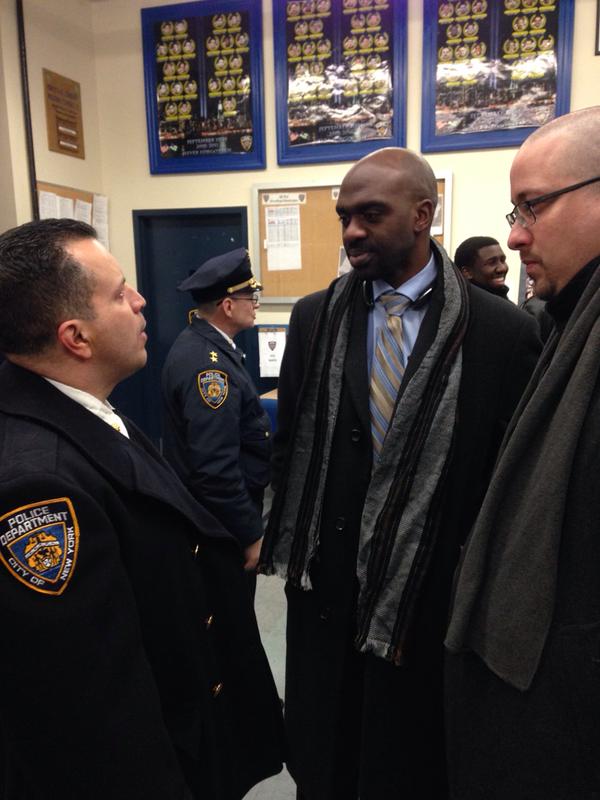 Two days after announcing that he would be joining a consulting firm as a partner while retaining his seat in the New York State Assembly, Michael Blake has changed his mind.

"I've decided that the clear priority is and always has been the constituents of my district, and I'm not going to allow anything to distract from that. I'm not going to be a partner at Hilltop," Blake told Gotham Gazette Sunday evening, meaning Hilltop Public Solutions, the consulting firm.

The change of mind comes after the Friday uproar when, on the same day that former Senate Majority Leader Dean Skelos was convicted of using his public office for private gain, Hilltop announced that Blake was joining the firm. Blake and Hilltop both said he would only be handling national and international clients - none with business before New York State - and Blake explained that the move had been cleared by an Albany ethics commission. But, the timing and the cynicism around Albany lawmakers and their real and perceived conflicts of interest led to a powerful backlash against the move.

Blake, a Democrat elected in 2014, is upset about how the announcement was portrayed, but acknowledged the bad timing and that the atmosphere around New York elected officials is toxic. The reaction to Blake's announcement came not just the same day as Skelos' conviction, but soon after that of former Assembly Speaker Sheldon Silver, also found guilty of abusing his government power for private gain.

"There is an environment and climate that we're in right now, that it is believed that anything that we do outside the legislature is wrong," Blake said during a Sunday interview. "While it's not a fair assessment in my eyes, we have to be sensitive that that's the reality. I did above and beyond being transparent and communicating what I would be doing, but even with that, you have people who have conveyed a narrative that there would be a conflict. Perception is reality, I did not want this to continue to be a distraction."

Dick Dadey, executive director of good government group Citizens Union, was one of Blake's toughest critics when the news broke on Friday. Told of Blake's decision on Sunday, Dadey said, "Michael Blake's bold decision to give up the Hilltop job is what true leadership is about. His taking the job was perfectly legal, but it did give the perception that there was a conflict of interest that could affect his ability to represent his constituents. He's gone from appearing to be 'more of the same' on Friday to being the kind of legislator that we need to send to Albany more often."

While saying that he will continue to push for transparency in state government as well as increased democratization of the Assembly, Blake argued that not all legislators should be painted with the corruption brush because of those who have abused their positions, such as Silver and Skelos.

"It is not accurate that there is a culture of corruption in Albany," he said, directly refuting claims by critics including good government groups and U.S. District Attorney Preet Bharara, who brought the cases against both Silver and Skelos. "There are 213 of us" in the legislature, Blake said. The bad actors "are the minority. The supermajority is doing everything above board and appropriate."

Blake has worked closely with Silver's replacement, Carl Heastie, who also represents part of the Bronx. He said that reforms were happening under Heastie, "Progress has already begun," Blake said Sunday. "Heastie was pretty phenomenal right out of the gate," getting newer Assembly members involved and opening up the decision-making processes.

"I've been one of the more public and ardent advocates for reform the entire year," Blake said, noting his push for Assembly members to be more involved in the budget process. "Just because you're providing for your family doesn't mean you can't also advocate for reform," he said.

Explaining that he is the primary income earner for his family, that his is the home at which family members gather during the holidays, Blake explained his need for earning beyond his $79,500 annual salary as an Assembly member. He also stressed that he is both against banning outside income and very careful about disclosure - Blake already runs his own small consulting firm.

"I'm not in agreement with banning outside income. I think we are ignoring race and class issues when we do that. You have no idea of the dynamics for someone who is serving," Blake said. "If you ban all outside income, you create a scenario where only the rich and wealthy can serve."

While running for office in 2014, Blake made money giving speeches and providing consultation for several clients. He disclosed the firm he founded, Atlas Strategy Group, his clients, and his income on a form submitted to the Legislative Ethics Commission, which is available on the JCOPE website. While he sought a vacant Assembly seat in 2014, Blake earned at least $80,000.

Blake, a former aide to President Obama and veteran of both of Obama's presidential campaigns, continued to perform paid speaking engagements and consulting in 2015, he said on Sunday. He will disclose all of his 2015 income as necessitated and he will handle clients in 2016, he said, while also explaining that he would be working with fewer clients through his own small firm than he would have if he had joined Hilltop.

"We know this decision hits Assemblymember Blake's family pocketbook hard," Dadey of Citizens Union said. "We look forward to working with him and his colleagues as we try to address the issue of state lawmakers' outside income and salary."

Blake said he will indeed bring in some income in addition to his base salary. "I'll still work in the same way I've been preaching and public speaking, I'll still consult from time to time," he said. "In the same way [legislators] can be a professor or a lawyer, and as I've done in the past, I'll disclose in the future."

Blake said he had informed those at Hilltop of his decision. "They have a great track record of electing progressives," he said of the firm. "I was going to help them with that national work. But they are understanding of the bigger picture. They are understanding of the work we could have done to help push progressive values across the country, it has to be secondary for me to the primary point of not doing anything that is perceived to be not helping folks at home."