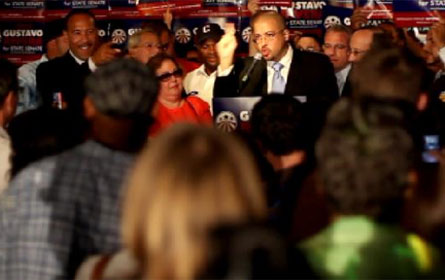 It's quiet at the Riverdale diner. Gustavo Rivera and three of his staffers sit at the back of the dining room against padded seats.

"I used to be in this position," Rivera says. "I used to tell candidates, 'There is nothing left to do. Go home."

Now at 8:30 on primary night, Rivera's campaign against Senate Majority Leader Pedro Espada is over. Rivera has shaken all the hands he can shake, kissed all the babies, spit his rapid fire spiel about how he will be responsible to the people who he hopes will put him in office. And now he waits.

Campaign staff say they think it will either be a landslide for them or a blowout the other way. Either way it will be over soon.

Rivera picks at his stuffed chicken breast, digs into a baked potato -- he hasn't eaten since earlier this morning. He has been bouncing back and forth between polling places covering any bases possible.

"I already got your fliers," women say walking toward the polling place. "I already voted for you," is another common refrain.

Reports pour in of the Espada campaign using dirty tricks to confuse voters or direct people to vote for Espada. Outside the Church of the Mediator polling site on 260 W. 231 St., Espada volunteers stand around some of their pamphlets on the ground. One especially motivated volunteer chants Espada's name; there is no return chorus.

Daniel Padernacht, who abandoned his bid for the seat but whose name still appears on the ballot, and City Councilmember Oliver Koppell urge people to vote for Rivera. Rivera takes the time to talk to the Espada volunteers. "Make sure he pays you," he tells them.

Espada was here earlier. He appeared and talked to some volunteers but didn't shake hands, didn't greet voters.

I ask Rivera if he thinks Espada has a grasp on the realities of being a public servant, the responsibility to voters of his district whether they like him or don’t. "No!" Rivera says. He is fired up. The tape recorder is turned off. He gets angry. Words like disgust, dishonor -- he expresses rage at what he says "Espada has done to the Bronx."

The word is that Rivera didn't exactly want this, didn't want to be the one to challenge Espada. He was used to being the behind the scenes guy. But after reviewing the possible challengers he came to the conclusion that he had to make the run because he had the means, the connections and the will to challenge Espada.

Even if it was all for naught, Koppell seems to imply, there will be other races to win. Rivera nods in appreciation.

At the diner, Rivera talks about the first steps he will take if he wins. In his mind, victory is not certain, but "It feels like we did it." He says his first priority will be to get bills together to help his district, tenants issues, jobs. But at the same time he says the district needs access to him. He wants his constituents to seek him out. "When I am elected people are going to know there is a mandate for reform. They won’t be able to stop it," he says.

I leave Rivera at the diner, he heads home to shower, change his suit, go over the three speeches the campaign has written: "We did it!" "We blew it!" and "Everything is a mess!" "See you at the party," he says smiling.

Less than an hour later Espada has conceded. The crowd at the Monte Carlo on Jerome Avenue explodes. Rivera takes the stage thanking unions left and right. "Union power," men on stage shout.

Rivera gives his victory speech. The campaign confirms that Espada did not place a congratulatory call to Rivera -- they roll their eyes. Sen. Liz Krueger dances to Jay-z's "New York." She says she expects Rivera’s victory will give Democrats a boost. "Did you expect this to be over so quickly?" I ask her. She looks at her watch, "Yes!" she exclaims.

Earlier in front of the church, a voter looked at Rivera's literature and realized that the actual candidate had handed it to her. "It’s so rare to actually speak to you people," she said. "You know what they all ask me?" Rivera says a moment later. "How am I any different? What makes me different than Espada. I’m not in office yet but I can tell them the first thing is that I want them to be able to talk to me. I will be accountable to them. They will know where to find me."