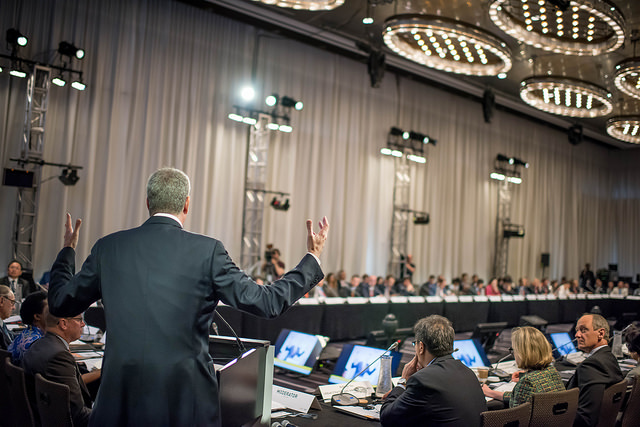 10. Big State Money Matters
In 2015, New York banned fracking, made plans for three new casinos, and gave away more big bucks toward economic development in areas of the state struggling to create jobs. Governor Andrew Cuomo was loved by environmental activists for the fracking ban, but criticized by those that look to fracking for economic stimulation, which is at the heart of the move toward casinos and state development grants.

9. Housing New Yorkers
Mayor de Blasio continues to struggle with New York City's homelessness crisis while he pushes forward with his ambitious and in some respects controversial affordable housing plans.

De Blasio is undergoing a shake-up in his administration in terms of leadership on the homelessness issue, all while Gov. Cuomo promises state-led fixes come January. De Blasio is pushing forward not only programs in place to prevent people from losing their homes and to get people out of shelter and into permanent housing, but also to mitigate a street homelessness issue that became a major political problem for the mayor. And, he's moving on his rezoning proposals, which have met quite a bit of community pushback, that are key to his affordable housing plan of building or preserving 200,000 units over ten years.

8. Education Debates Continue
The Common Core continues to stir controversy and is under review yet again - just like the standardized tests tied to the learning standards and their role in measuring student, teacher, and school progress. A big 2015 opt-out movement pushed the issue further. Teacher evaluation policies continue to shift as the weight of those tests is likely to be reduced after having been increased just a few months ago.

The battle over charter schools is largely settled, at least for now, strange as it is to say. Charters have been protected by Cuomo and state policy, and de Blasio has largely put down his sword, knowing that he has other dragons to slay. Charter advocates say they don't plan to hold big rallies in 2016 and Eva Moskowitz says she isn't running for mayor in 2017.

Mayor de Blasio's pre-kindergarten program has gotten off to a truly impressive start and he's dedicating increasing resources to schools serving the most disadvantaged students. But, as de Blasio and his schools chancellor, Carmen Farina, continue to implement their vision, questions have arisen: are they turning around struggling schools? Do they need more time or do they just not get it? They promise progress through more resources, community schools, tough love, and personnel reshuffling when necessary.

With the legislature, Gov. Cuomo signed off on just one-year extension to mayoral control of city schools and de Blasio will have to ask for another extension in 2016. Cuomo also promises another round of education reform proposals come January.

7. Policing New York City
Crime continues to trend down overall; though murders are up slightly, as are reported rapes; but shootings are down, as are several other major felony crimes. Complaints about police to the civilian board that fields them are down, as are marijuana arrests.

But, questions continue to arise from the right and the left about Bill de Blasio and Bill Bratton's NYPD: Are they really reformers, as de Blasio promised they'd be? Or is the broken windows approach too aggressive? Not being practiced aggressively enough?

Stop-and-frisks are down, but they're still disproportionately targeting black and Hispanic men compared to their proportion of the overall population. Cops have begun a new form of community policing in certain higher crime precincts, we'll know more in 2016 about how that is playing out, as we will about the efficacy of the department's new training protocols, instituted by de Blasio and Bratton. There's a host of NYPD reform and reporting bills sitting in the City Council that are opposed by Bratton (and thus, de Blasio), and are not moving - a major 2016 test for the Council Speaker, Melissa Mark-Viverito, and her progressive allies.

6. City & State Flush With Cash
The New York City economy is very, very good, and tax revenue is allowing the city a ballooning budget - including new union contracts - while the state has had an influx of cash due to bank settlements, allowing for billions in spending on infrastructure and more. Some parts of the state aren't doing well, and Gov. Cuomo continues to step in to send economic development funds their way. Everyone's wary of an economic downturn, but the city is so flush it is socking away money even while adding more to a budget clocking in at about $80 billion.

5. Cuomo-De Blasio Feud
The 2015 Albany session didn't go well for de Blasio - not just with the limited extension of mayoral control, but also with regard to his 421-a proposal aimed at furthering his affordable housing plan and with rent regulations coming in less generous to tenants than the mayor had hoped.

After de Blasio lashed out at Gov. Cuomo on June 30, it was on from there - an even more obvious, angry, and petty rivalry, which manifested regarding Legionnaires' Disease, minimum wage, the MTA, homelessness, crime, and more. Some say the feud is hurting New Yorkers whose lives and quality of life are in the balance as the two avoid collaboration about as much as possible. But, others say de Blasio and Cuomo are now trying to outdo each other on progressive policy and it may actually be helping struggling New Yorkers to a good degree.

As 2015 closes, neither will so much as say the other's name. As much as they say their staffs are in constant contact and they recently shared a well-publicized dinner to begin repairing the relationship, it's hard to believe that New Yorkers aren't unwilling victims of this rivalry.

4. City Continues Progressive Policy Push
Mayor de Blasio and a like-minded City Council are pushing forward with policies to help New Yorkers at the margins, and those in the middle class and struggling to make it. They've passed and continue to push new workplace and workforce regulations; affordable housing requirements; environmental and immigrant protections. They've implemented a municipal ID program; expanded library service, aid for senior citizens, community schools, and more as they seek to increase and equalize opportunity.

As mentioned, some question the city's free-spending ways, but the money is there and most fiscal watchdogs give city officials at least passing grades over the last couple of years in terms of responsible budgeting. Questions remain about new welfare standards, effective management of city services and the homelessness crisis, and more. For now, some think city government is overreaching in its efforts and spending, but the results appear positive as the city is relatively safe, the economy humming, and more New Yorkers feeling as though the government is working for them.

3. De Blasio's Up and Down Year
The mayor is doing a lot - while the city is safe and the economy continues to boom - but he's hit some roadblocks and gotten hit from the left and the right, all while being locked in his bitter feud with Gov. Cuomo, which is largely unhelpful to the mayor's agenda.

From the left, critics say de Blasio is too cozy with real estate; too harsh on homeless New Yorkers; and not enough of an NYPD reformer. From the right, they say he's too easy on homeless New Yorkers; not tough enough on crime; spending too much money on progressive programs; not closing enough failing schools or supporting charters; and not a strong enough manager.

No matter the criticisms, de Blasio has many programs in place and progress to point to in terms of his pre-kindergarten, affordable housing, and Vision Zero road safety plans, among others.

De Blasio's missteps regarding the presidential race and his approach to communications have hurt him, but he did find more solid footing as the year came to a close.

2. Cuomo Tacks Left
Governor Cuomo made a big liberal push starting just after Albany business wrapped up for the year. He moved on the minimum wage; nail salon workers; teacher evaluations; and several criminal justice reforms, to name a few of many signs of a governor who has found his inner liberal. This came after a tumultuous Albany season in which the governor was the only one of the 'three men in a room' still standing after Sheldon Silver and Dean Skelos were each indicted (and later convicted). While Cuomo oversaw budget and legislative deals that largely continued his more centrist governing style, he shifted hard left this summer and into the fall and winter. Next steps for Cuomo: showing New Yorkers he's finally going to lead a real push to clean up Albany corruption.

1. Preet Bharara's Trophy Wall
U.S. Attorney Preet Bharara took down two men who were among the three most powerful in New York state when he got to them. The indictments and convictions of former Assembly Speaker Sheldon Silver and former Senate Majority Leader Dean Skelos shook Albany - to the extent that anyone was surprised by more corruption among state lawmakers, charges against the two sitting legislative leaders within months of each other was truly shocking. Don't forget that they weren't the only state lawmakers forced from office due to corruption charges this year, and they're among dozens over the past decade or so who've stepped down or been removed from office for ethical problems.

Silver and Skelos have been replaced atop their chambers and will now be replaced in office come special elections. Will Albany replace key elements of the system that they, and so many others, took advantage of? As Bharara would say: stay tuned.