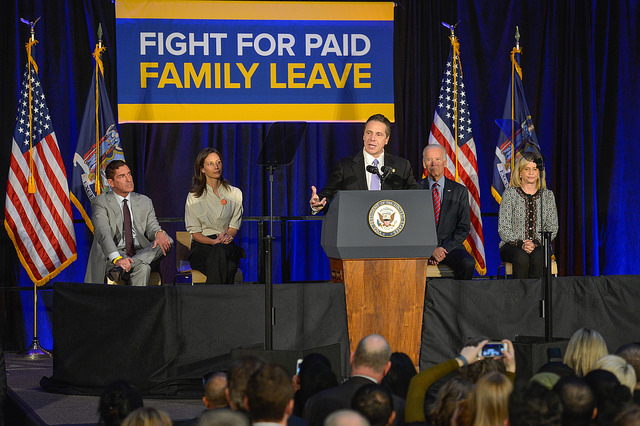 Last week, the New York State Assembly passed a one-house bill creating a program that would allow workers to take time off to care for a new child or sick loved one while receiving a portion of their usual pay. It is the fifth year in a row the Assembly has done so. "It's appropriate we're here on Groundhog Day, since we've been coming back year after year for paid family leave," said Donna Dolan, head of the New York State Paid Family Leave Coalition, at a press conference announcing the vote.

Just a few days earlier Gov. Andrew Cuomo rallied with Vice President Joe Biden in Manhattan to push his newly-unveiled paid family leave bill. Both detailed their experiences of being torn between work and being at the side of a dying loved one.

It was only last session that Cuomo insisted the legislature had no "appetite" for paid family leave. But now with major attention from media, elected officials, and advocates across the nation focused on whether New York will become the fourth state to pass a paid family leave bill, Cuomo is whipping up support for his plan. As are Assembly Democrats, whose plan is different, while all look to get the blessing of Senate Republicans, who control that chamber.

While Cuomo seeks to thread some middle ground with his plan, Assembly Democrats insist theirs, which includes higher benefits, is the way to go, and Senate Republicans indicate there may be room for compromise while saying they're wary of any additional burdens on businesses.

The Cuomo administration is proposing a plan that would pay benefits through contributions from employee paychecks and reimburse workers starting at the rate of 35 percent of earnings. The Assembly plan would expand the scope of the state Temporary Disability Insurance program to cover paid family leave and would also take contributions from employee paychecks, but would reimburse at a rate of two-thirds of a worker's pay for individuals on leave.

One central point of conflict is whether to connect the paid family leave program to the TDI--a move Senate Republicans appear to be sensitive to because of concerns that increasing the benefit for workers who take off time for their own disabilities would be a cost born by employers as well as workers. TDI is paid for by employers.

The state has kept the TDI reimbursement rate steady at $170 a week for decades. Legislators expect that increasing the rate will take immense political capital as it will almost certainly require contributions from employers.

However, there are also signs there may be room for compromise as the Cuomo administration has said it will introduce amendments to its leave proposal. Advocates expect the administration to increase the amount employees are reimbursed to bring it into line with the Assembly proposal.

"I think it is a very positive thing that everyone is talking about paid family leave," said Sen. Jeff Klein, head of the Independent Democratic Conference, who joined Cuomo and Biden for their rally last month, delivering opening remarks. "Serious discussions haven't started yet, but I'm hopeful."

Soon after speaking with Gotham Gazette, Klein introduced a new version of his paid family leave bill to the state Senate. Klein and the IDC jolted discussion of family leave last year when they successfully advocated for Senate Republicans, whom they have a coalition with and control the chamber, to include a paid family leave plan in their budget.

Before introducing his new compromise bill, Klein told Gotham Gazette that he believes negotiations should focus on Cuomo's proposal rather than the Assembly's because it is "more palatable" to Senate Republicans.

The dynamics around paid family leave have changed since last legislative session. Cuomo appears to have stepped into the role Klein's IDC was playing as they backed paid family leave supported in part by state funds and by deductions from employee paychecks. The Assembly Democrats' plan would use deductions from employee paychecks to expand the TDI, which currently provides partial pay for workers who are disabled and have to take off work.

Last year Cuomo rejected the Senate's family leave proposal put forward by the Independent Democratic Conference. "We need a paid family leave policy that is sustainable and would provide real protections to employees. What we should not accept is the Senate proposal, which is a half-loaf that does not provide sustainable funding or a workable framework for employees and employers," Cuomo spokesperson Melissa DeRosa said in a statement in March in response to the IDC's plan.

Klein's new plan would provide 12 weeks of paid leave starting at two-thirds of a worker's average weekly pay, or 35 percent of the state's average weekly wage by 2017. It would eventually offer 80 percent of a worker's salary, or 50 percent of the statewide average weekly by April 1, 2021. It would be paid for through a 27-cent-a-week contribution from employee paychecks and be distributed through a newly created paid leave system. It would not expand the TDI, but Klein has advocated doing so separately, to raise the TDI benefit after so many years of it staying flat.

Cuomo's plan, presented in conjunction with his State of the State and budget address in January, would create a paid family leave system that would offer up to 12 weeks leave paid for by a weekly, 60 cent payroll deduction. Workers would be able to take leave while earning 35 percent of their pay in 2018, rising to 66 percent by 2021. Leave pay would be capped at a weekly average of statewide pay - the 2014 average according to the state Department of Labor was $1,266.44.

The Assembly plan would expand TDI and provide workers with 12 weeks of paid leave at two thirds of their average weekly wage. It would be paid for with a weekly deduction from an employee's paycheck that would start at 45 cents. The plan would become effective July of 2017.

Advocates have leaned towards the Assembly plan as it provides workers with what they consider the minimum amount of pay to make taking leave feasible, as well as expanding the TDI, and requiring a smaller worker contribution.

Blue Carreker, head of Citizen Action of NY's paid family leave campaign said that her organization thinks any paid leave bill has to cover all workers and all businesses, provide 12 weeks leave, and increase the rates paid by TDI to bring it into parity with what will be paid by the family leave program.

Republican Senate Majority Leader John Flanagan has indicated he is open to negotiations. Following a speech he gave at an Association for a Better New York breakfast last month, Flanagan indicated he was moved by Cuomo's State of the State speech in which the governor described regretting not being at his father's side during his final days.

Flanagan tempered that openness with concerns he has about how a paid leave policy might impact small business. "If you're a business with four employees and someone is going to be gone for three or four months, that's a legitimate consideration," said Flanagan. "So a threshold on what's the size of the business, who pays for it, how are kids paid for, those are all absolutely important components and worthy of discussion, and I think those discussions are already taking place. Where it adds up, I don't have a crystal ball on that, but I think there's a lot more discussion about paid family leave now than there was even six months ago."

Republican Assembly Minority Leader Brian Kolb told Gotham Gazette, "A lot of business owners are saying 'Are you kidding me? Another thing that is telling me what to do and costing me time and money.'" He added that "there really aren't that many details except in that bill" from the Assembly Democrats, which "almost certainly won't become law."

A number of business groups stand against paid family leave. "Small employers are currently able to accommodate employees and provide flexibility in terms of scheduling," said Michael Durant, New York State director of The National Federation of Independent Businesses. "Those that can afford to offer paid time off already do and to require those that cannot afford the added expense will be dangerous to the small business sector. This is simply a solution in search of a problem and would be yet another government mandate on small business."

A recent DEMOS policy brief showed that 9 out of 10, or 6.4 million, working people in New York don't have paid family leave.

Increasing the TDI is an extremely sensitive issue for businesses and many legislators believe that including it with paid family leave will continue to be a poison pill. Most legislators are convinced by Cuomo's efforts on paid family leave and they see the inclusion of it in his budget and the way he rolled out the issue in the State of the State as a sign of steadfast commitment. They expect he will be willing to increase how much the leave program pays out and perhaps speed the implementation timeline, but not touch the TDI given his relationship with the business community. Increasing the TDI would be an immense victory for labor interests.

Carreker, who was waiting for a meeting with Cuomo administration representatives about paid leave when she spoke with Gotham Gazette, said she is confident a compromise can be reached and stressed she feels that advocates need to focus on educating legislators and small businesses on the impact paid family leave would actually have.

"It's about getting over that initial hurdle of the fear of change, of something different," said Carreker. "The more people that hear the details, the more they'll see it makes sense. This isn't a burden, it's an insurance program that covers the salaries so businesses can figure out coverage while an employee is away so that they don't have to lose good employees."