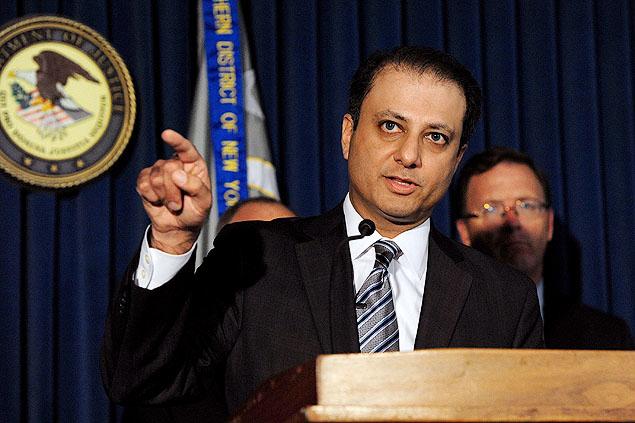 Asked how he can spur legislators to enact major ethics reforms during his visit to Albany on Monday, U.S. Attorney Preet Bharara said he has a "particularly blunt incentive...the avoidance of prison." The reminder from Bharara comes as legislative leaders and Gov. Andrew Cuomo are quietly discussing possible ethics reforms behind closed doors--reforms none of them have appeared interested in discussing publicly since Cuomo outlined his platform in his State of the State address last month.

Speaking before a captive audience, Bharara focused on the lack of a public conversation on ethics by lawmakers and the strict control legislative leaders have over rank-and-file members, and called on legislators to speak up against the norm and blow the whistle on corruption. The crusading U.S. attorney delivered prepared remarks and sat for an interview at an event on public corruption hosted by WAMC public radio and good government groups.

Bharara didn't need an indictment to send lawmakers scurrying for the exits during his visit. Earlier Monday at the Albany Hilton where they both addressed the New York Conference of Mayors, Republican Senate Majority Leader John Flanagan bolted up a flight of stairs before Bharara, the man who successfully prosecuted Flanagan's predecessor, Dean Skelos, took the stage.

Flanagan unsuccessfully tried to avoid reporters who inquired why he wasn't staying for Bharara's remarks. He said that he had "appointments" in his office. Flanagan refused to answer questions about what ethics reforms he might support this session, continuing what has been a deafening silence from legislative leaders on ethics reform for the last month.

"They're afraid they're going to get asked questions by the press about ethics reform," said Barbara Bartoletti of The League of Women Voters. "I would doubt we will hear anything from them on it soon. We have said 'please open up these leaders' meetings and tell us what issues you're looking at in the budget' but this governor has not done that."

Silence from both majority leaders and Gov. Cuomo has become the norm since earlier this year when Cuomo proposed a series of significant reforms that include restricting legislators' outside income, closing the LLC loophole, and public financing of elections. Flanagan has openly questioned the need for more reforms, while Heastie has said that his conference is open to discussing a number of proposals.

Cuomo has avoided holding a press conference with the Albany press corp for nearly 230 days, though he has taken a series of questions after events on a number of occasions. The lack of public leadership on ethics gave Bharara, who already attracts massive attention for his high-profile prosecutions, even more of a spotlight on the issue.

Bharara has been cursed and bemoaned by legislators for painting them all as corrupt. On Monday, he seemed at points to be trying a softer approach. While he did speak in stark terms at times, Bharara kept a fairly subdued tone and was quick to crack a joke as he spoke of the nobility in public service, the existence of "good" legislators who speak out against corruption and the "three men in a room" system that dominates decision-making in Albany.

As he said the key to undoing a culture of corruption in any institution is the good actors taking action rather than enabling the bad actors, the U.S. attorney said he expects more legislators will soon buck the closed leadership system. He also cited a recent Siena Poll that showed 92 percent of those surveyed think public corruption is a major problem.

"I heard a very strong exhortation to empower the good people in the legislature to stand up and that's basically what needs to happen," said Susan Lerner of Common Cause NY. "I think it was absolutely the right message and it's not scolding. I think it is important to empower change."

Dick Dadey, executive director of Citizens Union, introduced Bharara on Monday afternoon, noting the many lawmakers who have been removed from office in recent years due to corruption. Dadey agreed that Bharara went out of his way to acknowledge legislators who want reform. "He was acknowledging that there are lot of good people serving in the legislature who are tarred by the brush of corruption, by the actions of those who have been convicted," Dadey told Gotham Gazette. "That being said, they have a responsibility to address this issue of corruption and for them to swing too low and not truly address the core issues contributing to all of this is an abdication of their responsibility as state legislators."

Bharara wasn't all sunshine and roses by any means. He lashed out at legislators for "whining" and failing to blow the whistle on corruption. "People knew, people knew before the prosecutors showed up, before the FBI showed up," he said. "People always know. You think no one knew Sheldon Silver was corrupt before he was put in handcuffs? Not a chance."

He also shamed those in the Assembly who tried to keep Silver as leader even after he was indicted. Bharara said that police or teachers who had been arrested and faced a 35-page indictment would find themselves on "desk duty" or in a "rubber room."

Bharara called for there to be more respect for public service by public servants and continued to challenge them to live up to the jobs they hold. He mocked Silver's defense strategy that his behavior was just "politics as usual" asserting that that defense unfairly tarred his fellow lawmakers.

What Bharara did not offer was specifics, though he did give a half-blessing to a few reforms, like pension forfeiture for those lawmakers convicted of wrongdoing. Bharara declined to weigh in definitively on proposed reforms such as increasing legislators' pay and banning outside income, though he did say that there is a good argument to be made for limiting such income.

The U.S. attorney would not comment on his investigation into Cuomo's' Buffalo Billion economic development plan. "We aren't closing up shop anytime soon," Bharara said smiling.

Lerner said she thinks Bharara's visit comes at an important time when the legislature is negotiating reforms behind closed doors and cautioned patience as the process plays out. "The most important thing right now is not what they say publicly but are there internal discussions going on and I believe there are. Like the U.S. Attorney said, we need reform-minded people pushing the leaders for change. I'm very happy not to go to one more press conference that results in nothing. We want them to talk amongst themselves and come to a conclusion that they need to adopt reforms, and that could be a quiet time where they aren't saying much to me and you."

Concern is growing amongst reform advocates that Assembly Democrats have fallen back to their default position under Silver of waiting to voice their individual opinions until they are told what the leader has decided. Meanwhile, Senate Republicans appear desperate not to pass any of Cuomo's substantive reforms. Bartoletti said she expects the issue of reform could slip away given that this is an election year, unless Bharara bags another big indictment.

Bharara made it clear on Monday that he is ready to serve as a constant reminder that reform is needed. "This moment in history calls for something more than just talk," Bharara said. "There's been a lot of talk."