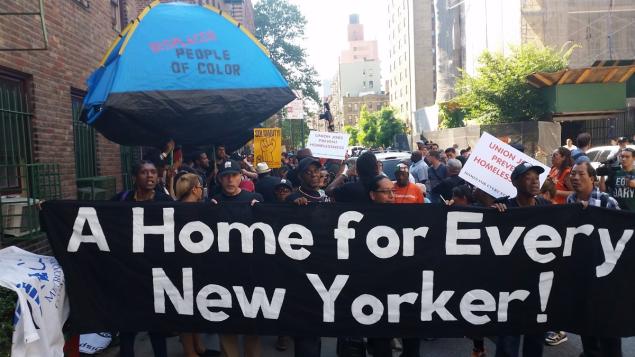 Housing groups are coming to the defense of a report issued this week that critiques Gov. Andrew Cuomo's homelessness policies and questions his attempts to place the blame for a rising homeless population on Mayor Bill de Blasio.

Kristi Berner, spokesperson for the State's Office of Temporary and Disability insurance, slammed the report in a statement to the Daily News on Monday, calling it "an obvious political tactic to distract from the city's incompetence in managing the homeless problem."

Now, The Alliance for Tenant Power Coalition and the Met Council on Housing are countering, saying that the Cuomo administration is politicizing legitimate policy issues to distract from the governor's own accountability. They say that the groups and the report are not tools of the mayor and point out that they have been critical of some of de Blasio's housing policies as well.

"We have been, and will continue to be, critical of Mayor de Blasio's housing plan for what it will do to our communities. But he is not the only elected official who is responsible for our city's affordable housing and homeless crisis," reads the statement signed by The Alliance for Tenant Power and Met Council on Housing, which was sent to Gotham Gazette. "Governor Cuomo's actions, his refusal to fight for stronger rent laws, and his handling of the homeless crisis are all worsening a situation that is at a breaking point," the groups say.

"We are fully supportive of the report entitled New York Needs a 21st Century Homeless and refute the claim by Cuomo's spokesperson that it is "trying to give cover to de Blasio." The only "political spin," is Cuomo's attempt to shirk his own responsibilities for exacerbating the affordable housing and homeless crisis," concludes the statement.

The Cuomo administration declined to comment for this story. Doe Fund President George McDonald told the Daily News in a statement that the report "seems to be most critical of people who have demonstrated the longest and most intensive commitment to serving the homeless, like Governor Cuomo, and least critical of newcomers to the crisis."

The introduction of the report in question, authored by DC 37, VOCAL-NY and the Community Service Society, acknowledges that the state and city face a major homelessness crisis but posits, "As bad as the current crisis is, it can be reversed – but only if Governor Cuomo and the New York State Legislature adopt a genuinely progressive vision and abandon the failed policies of the Pataki era."

It continues: "Indeed, even though Cuomo has been governor for five years, his administration has done little to change the broken policies and deeply inadequate funding levels of the Pataki years. Starting now, Albany must work with the City to expand funding for permanent housing assistance and to enhance prevention efforts. Equally important, State officials need to work collaboratively with the City to make improvements to the shelter system engaging in accusations and counter-productive media skirmishes."

Last November advocates and legislators joined with de Blasio in pressuring Cuomo to match the city's commitment to fund thousands of units of supportive housing. Cuomo avoided the issue until his State of the State address when he announced a $10 billion plan to create 6,000 units of supportive housing and new emergency shelter beds. Cuomo linked these investments and others to renewed state oversight of shelters around New York, especially in New York City and Buffalo.

Since then, the Cuomo and de Blasio administrations have exchanged a host of letters over the city's handling of homeless shelters, partly in response to a series of violent incidents at shelters. The New York Times reported last month that the de Blasio administration was particularly outraged when the state issued a letter concerning a gang rape at a homeless shelter that appears to have never taken place without any investigation. City officials called the letter, which was leaked to the Post, "a media hit."