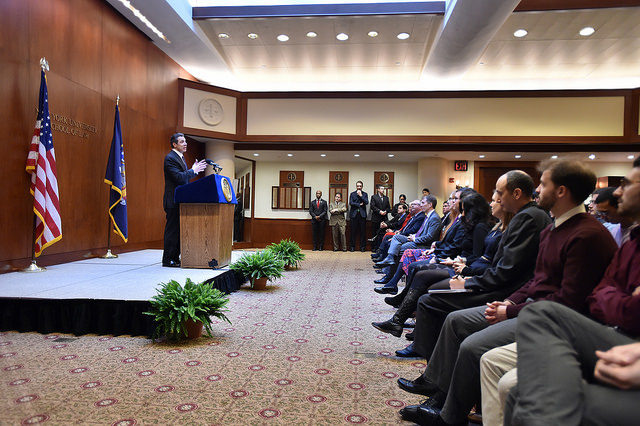 The state's independent ethics commission took the first official ethics-related action in Albany since the convictions of former Assembly Speaker Sheldon Silver and former Senate Majority Leader Dean Skelos on Tuesday when it appointed a man with ties to both Gov. Andrew Cuomo and legislative leaders as its new executive director.

Seth Agata, who JCOPE - the Joint Commission on Public Ethics - says it hired after a nine-month, nationwide search, currently serves as the head of the state's Public Employment Relations Board. He is seen by many as an ultimate Albany insider, and to some that bolsters his prospects for the job, while to others it should have been a disqualifying trait. Agata becomes the third former Cuomo aide of three people to hold the position over a five-year period.

The 14-member board includes appointees by the Governor (six), the two legislative leaders (three each), and the minority leaders of each house (one each). The JCOPE chairperson is selected by the Governor, the Executive Director is chosen by board members themselves.

"A better choice [for executive director] is someone who is clearly independent from both the Governor and the Legislature," John Kaehny, of Reinvent Albany, told Gotham Gazette. "In the entire United States there must be at least one, well-qualified person, who didn't used to work for the governor."

Agata has also worked in Cuomo's counsel's office, as a counsel for program and policy for the Assembly Majority, and as counsel in the investigations office of the State Comptroller.

The body, which has been maligned as rudderless and ruled by infighting, is charged with ethics monitoring, "ensuring transparency," and "providing accountability through enforcement actions to address ethical misconduct." Critics also say JCOPE, which was created through a 2011 law, is designed so that slight dissension can block investigations into public officials and candidates.

Dick Dadey, executive director of Citizens Union, praised Agata, calling him a good choice, but also expressed reservations about his connections to Cuomo and the Legislature. "Seth Agata has the kind of trained eye we need to suss out what is really going on in Albany," said Dadey. "I wouldn't say it about anyone else [with such ties to the governor], but Seth has the kind of character we need to lead JCOPE in an independent fashion toward the reforms it so badly needs."

However, Dadey added: "It is a sad commentary on the state of affairs in Albany when the only action the Legislature and governor take on ethics following the conviction of both legislative leaders is the appointment of a JCOPE chair who has ties to both the governor and Legislature."

Blair Horner of the New York Public Interest Research Group was also torn about the appointment. He called on JCOPE to make the details of its search for a new director public. Horner described Agata as "thoughtful" and "straightforward," but said the big question comes down to "the hiring process."

"The public deserves to hear from JCOPE about the process that led them to pick Agata," said Horner. "Independence is clearly a major factor in running an ethics commission, we need to hear from JCOPE why they thought he was the right choice."

The press release announcing Agata's hiring said it followed a search that included advertisements in "top legal publications and newspapers" and resulted in 200 resume submissions.

"Seth Agata is a tremendous choice for Executive Director of the Commission," Commission Chair Daniel Horwitz said in a statement announcing Agata's hiring. "He brings a wealth of knowledge, experience, and integrity to the position."

Previous JCOPE heads include Letizia Tagliafierro, who worked for Cuomo during his time as attorney general and later as his director of governmental operations. She left JCOPE and took a position as deputy commissioner of the state's Department of Taxation and Finance in 2015. Her appointment in 2013 drew the ire of legislative members of JCOPE, including one who quit in protest.

Tagliafierro replaced Ellen Biben, who worked as the governor's inspector general and in the attorney general's office when Cuomo held that position. Biben now is now a Court of Claims Judge - she was nominated for the position by Cuomo.

Agata's appointment comes as Cuomo has admitted that talk of ethics reforms have been jettisoned from budget discussions and legislative leaders, especially Republican Senate Majority Leader John Flanagan, appear loathe to take any major action. Good government groups have pushed Cuomo to lead on reform in the wake of the Silver and Skelos convictions but the Governor has remained quiet on the issue since January.

Horner and other members of the good government community say JCOPE is designed in such a way that does not foster transparency or faith that its process is not political. JCOPE has 45 days from receiving a complaint to decide whether to investigate an ethics violation but it has no obligation to reveal its investigations.

An investigation can be stopped by three votes out of the 14 commissioners and most of their business is conducted behind closed doors. If a violation is found against a sitting member of the Legislature, JCOPE then has to refer the case to the Legislative Ethics Committee, which is controlled by the legislative leaders. JCOPE can disperse punishment to regular government employees.

The body is charged with maintaining income disclosures from the legislature, lobbyist registrations, and fielding complaints about ethics violations across state government. Legislators' outside income has been the source of much discussion as Cuomo and others have proposed strict limits, while Republicans (and some Democrats) in both legislative houses have balked. Silver's non-government income was at the source of his federal corruption conviction.

The commission announced the launch of two new investigations from its meeting on Tuesday. It is suspected that at least one of those investigations relates to Sen. Marc Panepinto, who announced last week he will not seek reelection. Rumors have swirled about misbehavior in his office.

"I am very disappointed when a person who runs for office and holds themselves out to be trusted by their community winds up involved in a sordid affair," Cuomo told reporters this week when asked about Panepinto. "So, I don't know the details. I don't want to know the details. But let somebody else run who will respect the position."

When asked about the phrasing "sordid affair" by The Buffalo News, a Cuomo spokesperson said the governor was referring to things he had read in the press.

JCOPE members appointed by legislative leaders have openly complained of interference from the executive branch and pushed for JCOPE to look for an executive director without ties to the administration.

Critics say JCOPE has picked around the edges while federal investigators have tackled serious investigations that get to the root of corruption in state government. U.S. Attorney Preet Bharara, good government leaders, and others have called on Albany to strengthen both preventative measures and enforcement mechanisms.

Kaehny of Reinvent Albany said that he feels Agata's resume should have immediately disqualified him from the job. "Even if Seth Agata is as wise as Solomon and pure as the driven snow, he used to be one of Governor Cuomo's top people, and there are inherent questions about whether he can be impartial and completely non-political, rather than a potential political weapon for the governor."