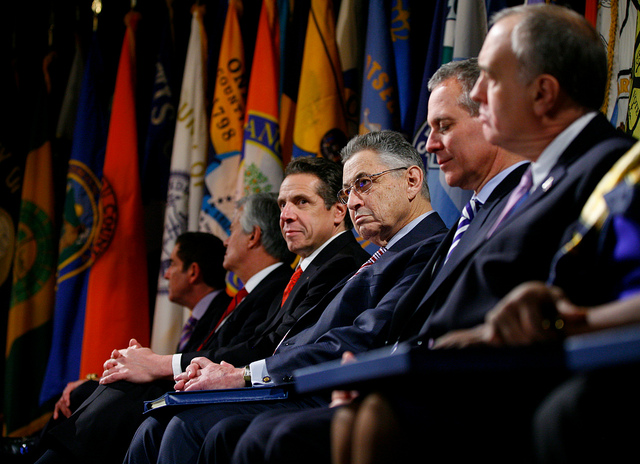 Silver, Cuomo, and others (photo via The Governor's Office, 2013)

Former Assembly Speaker Sheldon Silver was perceived by many to be an institution of state government. Having served at the head of the Democrat-controlled Assembly for over a decade, Silver’s rule was iron-fisted and opaque - he could end a political career on a whim, kill a major policy initiative with a quiet grumble, and maneuver millions of dollars in state cash to recipients of his choice.

That all ended last year when Silver was indicted by the U.S. Attorney on multiple corruption charges and voted out of leadership. For a few weeks he sat at a desk like a rank-and-file member of the chamber he once dominated. Even then some legislators thought there was a chance Silver would survive the scandal, but that was until he was convicted on all counts in late November. On Tuesday, Judge Valerie Caproni reminded Silver of the finality of his conviction, sentencing him to 12 years in prison, ordering him to pay back more than $5 million in ill-gotten riches, and fining him $1.75 million.

“I hope the sentence I impose on you will make other politicians think twice, until their better angels take over,” Judge Caproni told Silver. “Or, if there are no better angels, perhaps the fear of living out one’s golden years in an orange jumpsuit will keep them on the straight and narrow.”

As tough as Silver’s sentence might seem, there are a number of reformers that fear it is just another in a parade of sentences handed out to state legislators who violate the public trust and that without real reform politicians will be able to continue using their power to earn outside income that is tied to policy decisions, that they’ll be able to steer state funding to those they do business with.

Blair Horner of The New York Public Interest Research Group (NYPIRG) told reporters at a press conference a little more than an hour before Silver’s sentencing that he feared Gov. Andrew Cuomo and legislators will be content to act on only one reform measure this year: the first vote of two that is required to change the constitution so that lawmakers convicted of a felony are stripped of their state pensions. Both Silver and former Senate President Dean Skelos, also convicted late last year of public corruption, are set to receive hefty pensions.

“If that’s all they did they might as well not do anything,” said Horner. “You would think that going to prison would be a far more scary prospect than a loss of pension,” Horner said, noting that prison terms have not yet proven to be a real deterrent. Silver is joining a long list of former New York legislators to serve prison time.

NYPIRG and other government reform groups including Common Cause NY, Citizens Union, League of Women Voters NYS, and Reinvent Albany held simultaneous news conferences in Albany and New York City on Tuesday to call on lawmakers to act to prevent corruption in state government. They released a list of five reforms they want to see enacted immediately.

Good government leaders and reform-minded legislators say that the Legislature needs to take action to focus on preventing crimes instead of worrying about how to punish legislators once they have already been committed.

“What we want today are preventive measures,” said Laura Ladd Bierman of League of Women Voters. Reformers are calling, she said, not for more punishments, but for “things that prevent [corruption] in the first place.”

On Tuesday, Democratic Senator Todd Kaminsky was sworn in after winning the special election to replace Skelos. Asked by reporters if he thought there would be any consequences to the recent ethics scandals, Kaminsky said he thought his election was one direct consequence.

“I think my election is one of those results of what happens when you don't get reforms. I took a seat that was held by the same party since I was in first grade,” said Kaminsky, himself a former federal prosecutor of public corruption who helped put crooked New York lawmakers behind bars. “Things don't change lightly, they change when there are big seismic changes and I think thats whats happening.”

Silver’s replacement, current Assembly Speaker Carl Heastie, struck a somber tone with reporters, but said that it was time for life to go on and that most state legislators are good, hard-working people, though there are always a few bad apples in every industry.

“But the fight to clean up our government is far from over,” Kaminsky said. “Silver's sentencing should serve as a reminder that serious changes still need to be made in Albany. Our elected officials must act swiftly and strongly before the legislative session is over to put an end to the parade of corrupt politicians who have cut taxpayers out in our state for too long.”

Largely similar to the list put forth by reformers on Tuesday, here are five things lawmakers can do over the next few weeks to help limit corruption in New York:

1. Ban or Limit Outside Income
Gov. Andrew Cuomo’s 2016 budget proposal included a bill that would restrict lawmakers outside income to 15 percent of their legislative salaries, which are currently $79,500 per year, mirroring the Congressional model. Silver was convicted of receiving payments from a law firm for which the only service he provided was referring sufferers of a deadly form of cancer.

Silver steered state funding to a doctor who in turn provided Silver’s law firm with the name of Mesothelioma patients. The arrangement earned Silver over $3 million in referral fees.

A number of other legislators work or have worked as counsel to law firms that may have business pending before the state, others have worked as lobbyists or consultants. Backers of Cuomo’s plan and ones like it say that legislators’ first loyalty should be to the people of New York and not to an outside employer.

However, legislators complain that their annual salary is not adequate. A pay commission is currently considering raises for the Legislature and the executive branch.

The Assembly has advanced its own bill to limit legislators’ outside income to almost $70,000 annually, a number that represents about 90 percent of current legislative salaries.

Senate Republicans have balked at the idea of limiting outside income. Senate Majority Leader John Flanagan, who left his outside practice when he replaced Skelos last year, has said he opposes a ban or strict limits. Republican Senator John DeFrancisco has argued that a ban would dissuade well-qualified people from public service. “I think you’re eliminating a lot of good people in government,” DeFrancisco told State of Politics in January. “If anyone really thinks creating a professional politician is going to root out corruption, where that politician is required every two years to win an election, I don’t think that’s a road to any less corruption.”

Kaminsky disagrees. On Tuesday after his swearing in, he said, “To have both leaders of both houses convicted and not having moved on outside income is unconscionable. We’ve got 21 session days starting in about ten minutes, so let's get to it.”

2. Create Stronger Budget Oversight and Transparency
In a new report, Comptroller Thomas DiNapoli criticizes this year’s budget for relying on lump sum appropriations. Silver was able to tap into hundreds of thousands of dollars of those sums to provide support for the doctor who provided him with referrals. The funds are not subject to public scrutiny.

Good government groups want such lump sums either banned or included in a newly created database to track exactly who requests the cash, who ends up spending it, and how it is spent. A Citizens Union report recently revealed that the 2016-2017 budget contains $2.4 billion in lump-sum spending.

3. Confront Pay-to-Play
Entities with business before the state are also some of the biggest campaign contributors. Good government groups say it creates at the very least an appearance of an inherent conflict of interest wherein those who give the most end up with favorable legislation, state contracts, and business subsidies. New York City currently places very strict limits on campaign donations from anyone with business before the city as part of its public-matching program, which the state does not have.

In another part of his scheme, Silver encouraged real estate groups with business before the state to use a law firm he was connected to in exchange for kickbacks from the firm. Real estate interests are some of the biggest donors in the state and have been allowed to negotiate policy by Gov. Cuomo and the Legislature.

4. Close the LLC Loophole
Real estate and other groups have been able to game the state’s already lax campaign finance limits by using a loophole that allows the creation of mysterious limited liability corporations with the express purpose of donating to favored politicians. “We have the highest limits in the country of any state that has any and even those limits get circumvented,” said Horner.

Leonard Litwin - who had previously been the largest campaign donor in the state - described to prosecutors how he and his corporation, Glenwood Management Inc., used the system to get around contribution limits.

Richard Runes, a lobbyist overseeing Glenwood’s government relations, detailed the process during Silver’s trial, saying: “I would take the checks, and I would attach my business card to the check with a paper clip, put it in a 1200 Union Turnpike envelope, and deliver it to whichever campaign committee it was going to,” referring to Glenwood’s address.

5. Ethics Watchdog Independence
The Joint Commission on Public Ethics (JCOPE), tasked with policing lobbying and ethics in the state, is renowned for its opaqueness and lack of major action. The body is made up of legislative and gubernatorial appointees, and the three chairs it has had in its short existence have all served as aides to Gov. Cuomo (one of them even returned to Cuomo’s direct employment after leaving the body).

The commission has routinely been crippled by infighting, with legislative appointees calling for less influence from the governor’s office, and JCOPE largely conducts its business in secret. The appointees of both Silver and Skelos have lingered on after their bosses were convicted of public corruption.

“We need to have a much better enforcement mechanism,” said Horner. “The fact that JCOPE has been relegated to the sidelines shows the need for better enforcement. We shouldn't have to rely on the federal government to police the state. We don't want a group that is solely a creature of the Governor and Legislature.”

“JCOPE needs to be an open entity,” Horner added. “It’s a public ethics watchdog, we should know as much we can know about it within reason.”

Note: this article has been updated to reflect the two Tuesday news conferences and that a list of reforms was put forth.