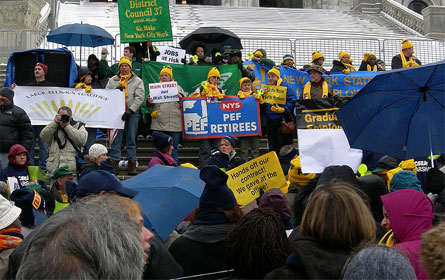 Photo B Campbell
Workers rallied again proposed state budget cuts in Albany in 2009. Public employee unions have resisted many efforts to reduce spending, but Andrew Cuomo vows he will push back.

Andrew Cuomo has declared war on unions -- and union leaders are simply grinning and bearing it. With the state facing a cratering budget deficit, both the Republican and Democratic candidates for governor have made it clear that they expect major concessions from labor unions, and a property tax cap and will not raise taxes.

Cuomo’s intentions were clear earlier in the year, but the attorney general and Democratic gubernatorial candidate had not made his intentions so public and plain as he did in an interview with the New York Times that ran on Monday.

In that interview, Cuomo said he intends to run a permanent presidential-style campaign against labor unions, so that he will have the leverage to initiate spending cuts and negotiate contracts that they will almost certainly resist. Cuomo detailed how other New York governors have been brought to their knees in budget negotiations by public campaigns launched by unions. Cuomo will now try to use that strategy against them.

Despite Cuomo’s general anti-labor stance some unions have endorsed Cuomo and raised money for him -- others have declined to endorse in the race. Supporter or not, labor hopes that, despite Cuomo's plan to campaign against unions, he will treat them as partners rather than enemies.

Trying to Get Along

Unions have varied in their approach to dealing with Cuomo, who is perceived as the inevitable next governor. "There are two different approaches," said Dick Iannuzzi, president of the New York State United Teachers. "Either you endorse a candidate because you think they will better serve your interests, or you endorse them because you think they will be the better leader. In this case it is fairly easy, because Mr. Paladino is the other choice. And that is what some unions did -- they endorsed based on Mr. Cuomo's history as a leader."

Concerned with Cuomo's plans to initiate a property tax cap and cut spending and frightened by Paladino, United Teachers decided not to endorse. A property tax cap would likely limit a key source of funding for school districts outside New York City, something the state teachers union will not sign off on.

"Our positions are not aligned with his," said Iannuzzi of Cuomo, "It’s not just about the person but the policy."

Iannuzzi noted he is willing to work with Cuomo -- but wants to be treated as a partner.

"We hope to have an open, honest relationship with the governor," said Iannuzzi, "He is a man of his word, and I believe he thinks that I am."

Steve Madarasz, spokesman for Civil Service Employees Union, agrees about the need for cooperation. Cuomo sent labor leaders copies of The Man Who Saved New York, a biography of former Gov. Hugh Carey, but Madarsz said, "The Cuomo camp is involved in some revisionist history. Hugh Carey came in bullish and tried to dictate terms to labor, but he learned quickly that it was more effective to bring people to the table and treat them with respect."

"If people come in looking to work together to find solutions for the state we want to do that -- that is what we do," said Madarasz, "but if they come in and try to dictate terms, we are going to be prickly. We have had success in local government where we are approached about negotiating new terms to help everyone. Nothing is easy, but it works a lot better to treat everyone as partners than if someone comes in calling names and trying to bully us around."

Madarasz said that neither Cuomo nor Paladino "has said or done anything to earn our endorsement."

Other major unions including the American Federation of Labor-Congress of Industrial Organizations and the Public Employees Federation have endorsed Cuomo. Service Employees International Union 1199, which represents health care workers, is seen as having a strong relationship with Cuomo. Lobbyist Jennifer Cunningham, a former service employees vice president, is one of Cuomo's top advisers. The union has donated over $50,000 to Cuomo-Duffy 2010 over the last two years.

1199 also is perceived to be more aggressive and effective when it comes to battling cuts than the teachers or civil service employees. It launched devastating ad blitzes to fight health care cuts proposed by former Gov. Eliot Spitzer and Gov. David Paterson. The barrages of commercials didn’t always stop the cuts, but they severely damaged the reputations of the governor’s who felt their wrath.

Whether it spurred their support -- or is the effect of it -- 1199 workers also do not seem likely to be hit as hard by Cuomo's cuts as members of the other unions. Many of the service employees do not work directly for the state government but rather for private and public hospitals and health care agencies that receive money from Medicaid. While Cuomo supported Paterson’s recent order to lay off 2,000 more state workers, an action that directly targets civil service employee members, and plans a property tax cap that would likely hurt teachers, his promises to reform Medicaid are not perceived to be as sharp or particularly harmful to SEIU1199.

How is it that both mainstream gubernatorial candidates are running against organized labor? After all more than 2 million New Yorkers -- or about a quarter of the state's workers -- belong to a union, the highest rate in the country, according to the AFL-CIO.

For one thing, Cuomo has been moving to the right since his run for attorney general in 2006. Secondly, Paladino is seen as such a long shot, one who has alienated many members of his own party as well as Democrats, that Cuomo has not needed to organize the traditional Democratic base. Business groups and their supporters have convinced many New Yorkers -- rightly or wrongly -- that raising taxes will drive more businesses and families out of New York. Without more revenue the state must lay off workers -- union members -- to balance its budget. Many critics charge that, rather than looking for solutions to the state's fiscal woes, labor leaders pressure legislators into increasing taxes and packing the state budget with perks for them.

The Working Families Party -- backed by labor unions -- felt it had to sign off on Cuomo’s policy plans, including a proposed austerity budget, because without Cuomo they could have lost their ballot line. Therefore, they did not raise any sort of fuss about his direction.

"People say, 'Vote for Cuomo on the Working Families Party Line,'" said Howie Hawkins, Green Party candidate for governor. "Well, they collapsed; they accepted his austerity plan. If anyone wants to send Cuomo a message they better vote Green."

In the eyes of most unions, Paladino, who has called for a 20 percent spending cut, is even less palatable than Cuomo. Plus few take him seriously. That has left many feeling they have little choice but to work with Cuomo rather than battle against his election.

Assemblymember John McEneny, who represents Albany County with its many state workers, said he was disappointed that Cuomo backed Paterson's order to layoff 2,000 more workers. In his mind, the state could do more to offer early retirement packages to reduce its workforce.

He also expresses some skepticism about the idea that high taxes are driving the state into the ground. He points to states like Nevada that are suffering far worse economic downturns then New York. "Other states with low tax rates and that provide a low amount of services to their citizens are doing worse than we are," he said.

Hawkins says he has been invited to more union meetings and to speak to more crowds than ever before, because people want to know if there are alternatives to Cuomo's austerity budget. New York City Councilmember and Freedom Party candidate Charles Barron also touts his plan to avoid major job cuts and to increase taxes on the rich; it is said that he wants to draw the city’s minority vote away from Cuomo.

Hawkins has proposed reinstating the stock transfer tax -- a move he says would generate a $7 billion dollar surplus. Opponents of the measure say the action would instead drive investors and companies out of New York. Further, Hawkins supports returning to the kind of progressive income tax structure that New York had in the 1970s so that the rich would pay "more of their share."

These tax changes would save New York from the austerity budget proposed by Cuomo and Paladino and allow the establishment of a Works Progress Administration style authority that would put any New Yorker who needed a job to work. Even politicians opposed to major cuts, generally dismiss Hawkins’ ideas as pie in the sky. But Hawkins says his proposals are very much based in reality. "People know we have provided jobs to people before. The emergency jobs program created by Roosevelt worked," he said.

Hawkins said the major party candidates have not even discussed these proposals.

"The lack of discourse between the two major candidates has opened doors for me," said Hawkins. He does not expect to get elected, but the behavior of the major candidates is helping better establish the Green Party. "I understand some people wouldn't want to endorse the little Green Party, but I think we are increasing our foundation, and people will want to in the future. There is a real opportunity for us this year."

Cuomo’s success against labor is far from assured. Cutting jobs to save money will have effects on people beyond the laid off workers and their families. With jobs go services, and labor unions will be quick to rally the public to their defense. They will also likely have Assembly Democrats and Assembly Speaker Sheldon Silver there to back them in budget negotiations, and they will be able to fall back on legal action and arbitration should things not go their way.

Major contracts with the state will be up in the spring, negotiations will start, and that will be the real test of whether Cuomo plans on pushing unions into a corner or working with them as partners.