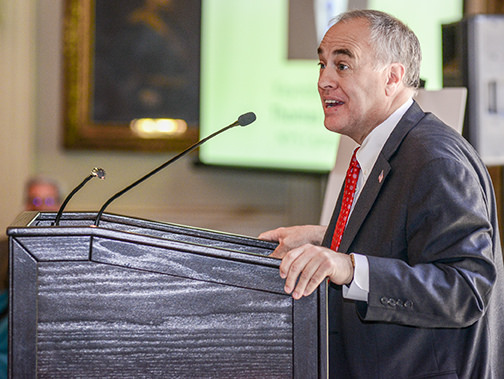 “With all the other storylines coming out of Albany these days, it’s not surprising that fiscal reform doesn’t crack the top ten list of priority issues to address, but it should,” said New York State Comptroller Tom DiNapoli at a Wednesday morning event held by Crain’s New York Business, striking a serious tone as he outlined proposals for fiscal reform just released by his office.

“A lack of fiscal transparency and accountability affects everything we are trying to achieve as a state,” said DiNapoli, a Democrat in office as the state’s elected fiscal watchdog since 2007. “It hinders full, open public discussion of critical decisions that are essential to sound, sustainable budgeting. In the extreme, or worst case, it can contribute waste or abuse of taxpayer dollars...it is time for us to improve our fiscal practices.”

DiNapoli’s reform agenda would also address other areas of concern, such as the sufficiency of reserves and the appropriate levels and use of debt, as well as capital planning and prioritization. He said his office has drafted legislation that lawmakers could pass to enact his reform proposals (though one would require a constitutional amendment), which is included in his report. DiNapoli is a former state Assembly member from Nassau County.

Public authorities are not subject to the same oversight as state agencies, which allows for “backdoor spending,” or the spending of millions of taxpayer dollars without traditional checks and balances. DiNapoli’s proposal would require state-funded public authority projects to be “scored and ranked using measurable and objective criteria,” he said, as well as greater disclosure of those authorities’ activities.

Eliminating discretionary lump sum appropriations, through which the state spends billions of dollars with little, if any, justification for how projects were selected to receive funding or explanation of how the funding will be used, is another proposal the comptroller is supporting. “For instance,” DiNapoli said, “a $385 million increase of authorized borrowing for the state and municipal facilities program was enacted with little detail on intended purposes, projects, or selection.”

The use of lump sum appropriations for executive and legislative initiatives “raises issues of transparency and accountability,” DiNapoli said. His plan would also require unallocated funds to be awarded through an open and competitive process with clear, measurable criteria.

“The people of the state have the right to expect transparent, accountable budgeting and the confidence that public resources are protected from waste and abuse,” DiNapoli said. “Too often, the state has fallen short of meeting that goal.”

DiNapoli’s reform package also aims to make the state’s notoriously opaque budget process more open and transparent by requiring the overall impact of legislative changes to the budget to be disclosed before the budget is adopted and the cost of new and existing programs to be included.

“Once again this year, the budget falls short on transparency, both in process and in content,” DiNapoli said, in part referring to the fact that this year, Governor Andrew Cuomo once again issued messages of necessity to waive the constitutional three-day aging period for budget bills in order to get the state budget passed before the April 1 deadline (technically, it wasn’t, but Cuomo and legislative leaders had a general deal in place on March 31).

“Just handed the 704 page State Ops budget bill at 3:38 AM to vote on in a few minutes,” Republican Assemblymember Raymond Walter tweeted in the wee hours on April 1.

“Major provisions were submitted to the Legislature with little time for review,” DiNapoli said, “and there was minimal disclosure of the short- and long-term fiscal impact of billions of dollars in spending and tax law changes.”

Part of DiNapoli’s reform agenda would require lawmakers to receive an update “so that the differences between the budget that’s going to be voted on and what was presented [by the Governor] would be understood by the Legislature.” This targets the situation that repeats every year in Albany where lawmakers are given those massive budget documents with hardly any time to look over what they are about to vote on. This occurs after deals have been struck by Cuomo and the leaders of the Assembly and Senate majorities, in the infamous “three men in a room” process that is much-maligned, but well-trodden.

“When Bill Mulrow, the governor’s secretary, was here last month, I had asked, ‘Why can’t there be some public vetting of the budget between when it’s finalized and when the vote is held?’” said Erik Engquist, assistant managing editor at Crain's New York Business and one of two moderators asking DiNapoli questions after the comptroller gave remarks. “And he looked at me like I had three heads and said, ‘Obviously you’ve never negotiated a budget before.’”

DiNapoli, who served as an Assembly member for two decades starting in 1987, can recall a time when the budget process was more transparent, though he admits that even then, there were some years “where last minute decisions were made” and lawmakers were “presented with a stack of bills that you didn’t really have time to read.”

At one time, however, when there was “a serious use of conference committees in the Legislature, where you engaged rank-and-file members beyond the leadership to meet...publicly, for the press to report on issues being considered,” DiNapoli said. “It at least gave the public a better sense of the choices being made.”

In more recent years, Gov. Cuomo has touted and been applauded for his ability to return Albany to timely function, delivering on- or nearly-on-time budgets each year since he took office in 2011. Earlier, state budgets were routinely quite late and the capital was known for dysfunction. Still, work done at the state capitol is regularly criticized for its lack of transparency.

While the reforms put forth by DiNapoli could help ameliorate corruption in the state government, said Nicole Gelinas, senior fellow at the Manhattan Institute and the other moderator at Wednesday’s event, “How do you convince other elected officials to tie their own hands and in effect not give themselves these opportunities for corruption?”

“I would argue that if you don’t tie your hands,” DiNapoli responded, “someone’s going to come to tie them up in handcuffs for you - that’s what seems to be happening lately.”

“I think, in this kind of environment, where people are so cynical and prosecutors are - justifiably - so aggressive, it would be smart, as self preservation, for these kinds of reforms to be adopted,” DiNapoli added. “Sunlight is the best disinfectant.”

“I believe that fiscal reform can restore public trust in state government and enhance the state’s ability to act in the best interest of all New Yorkers,” DiNapoli said to the crowd seated in the Grand Ballroom of the Yale Club - mostly men in suits from places like the Building Trades Employers’ Association, Cablevision, Nicholas & Lence Communications, and Brown and Weinraub PLLC, whose companies spent thousands of dollars for tables of ten to attend the breakfast event.

“There is time for the Legislature to consider it before they complete their deliberations,” DiNapoli said, referring to the ongoing, post-budget legislative session that is scheduled to end mid-June. “I’m hoping that given all the thought leaders that are in the room this morning, they will raise some or all of what we’re proposing and help to get the word out there.”