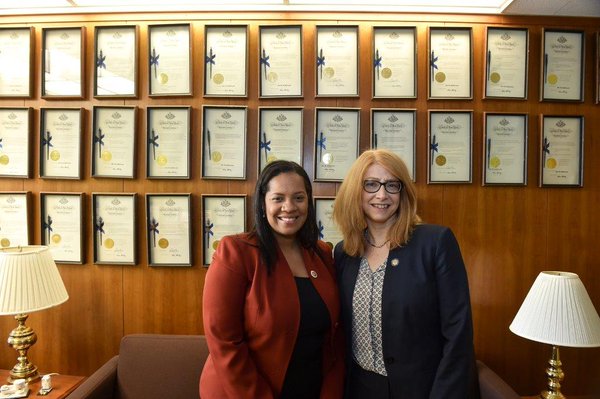 A difference of a few words is all that stands in the way of New York State becoming the sixth in the nation to exempt feminine hygiene products from state sales tax, though that could soon change. The Assembly sponsor of the bill, Assemblymember Linda Rosenthal, told Gotham Gazette on Thursday that she and state Senator Sue Serino, the Senate sponsor of the bill that has slightly different language, have agreed on new amendments that will make their bills identical.

However, Serino’s office declined to comment as to whether or not the two had actually reached an agreement, raising doubts about whether a compromise had truly been reached on an issue that is so strongly supported that both houses unanimously passed the bills to eliminate the so-called ‘tampon tax.’

Rosenthal said that, having agreed upon a few amendments to the legislation, the bill will head to the Governor “probably next week” after moving through both houses. Rosenthal is in the Assembly’s Democratic majority, Serino in the Senate Republican majority. Governor Andrew Cuomo, a Democrat, has already expressed his support for the legislation and will sign a bill to exempt feminine hygiene products from the tampon tax if and when it does reach his desk. The Legislature has just 15 days of legislative session left before its June end.

In March, the Assembly passed Rosenthal’s bill to exempt “feminine hygiene products, including, but not limited to, sanitary napkins, tampons, and panty liners,” from the state sales tax. In February, Serino introduced the same bill as Rosenthal, yet amended it some time after “to specifically exempt sanitary napkins and tampons from the tax,” according to a press release from Serino’s office. The Senate then passed that more limited version of Serino’s bill in April.

News of the bill’s passage in the Senate was met with celebration, and many outlets incorrectly reporting that the same bill had passed both houses and was heading to Cuomo’s desk.

Yet, the slight but significant difference between the two bills means legislation to eliminate the tax on feminine hygiene products can’t be signed into law by Cuomo - not until the language is identical.

According to Rosenthal, after speaking with Serino last week, the two agreed upon a few amendments to the bills that would make the two identical. “We put back other feminine hygiene products and added panty liners,” Rosenthal said on Thursday. The tax exemption “will include feminine hygiene products, including, but not limited to, tampons, sanitary napkins, and panty liners, because the world of products to meet the needs of women menstruating is actually expanding right now, so we didn’t want to have to revisit this at some point. It will be done,” Rosenthal said.

Organizations like NOW-NYC and the Campaign for a Pro-Choice New York (both of which either supported Rosenthal’s bill or lobbied for its passage) would prefer the more inclusive language of Rosenthal’s bill become the law.

“Obviously it’s always better if it’s more inclusive, but I don’t know what the mechanics of putting it into place are,” Jean Bucaria, deputy director of NOW-NYC, told Gotham Gazette.

“In instances like this, we of course support the broadest possible version of this legislation that helps the most people,” said Danielle Castaldi-Micca, director of political and governmental affairs for the Campaign for a Pro-Choice New York.

It may be the case that Serino and other lawmakers prefer the more specific language of the Senate bill because the fiscal impact of exempting only those two products (pads and tampons) from the state sales tax is easier to predict and account for.

However, both Bucaria and Castaldi-Micca believe a compromise is likely to happen. “I have confidence that they’re going to get to a point of agreement and a single bill that the governor can sign,” Castaldi-Micca said. In Albany, deals are often elusive until the very end of session, when a bill package known as a “big ugly” gets passed at the last minute before lawmakers leave town for the rest of the year.

Initially, the bill was to go into effect immediately, but “we changed that because there are four state tax reporting periods, so it will go into effect during one of those, it’s just easier to align it,” Rosenthal said.

In tax law, the coming exemption for feminine hygiene products, Rosenthal says, “stands on it’s own, it’s its own little section, it’s not connected with the other tax exemptions. It was a regressive tax on women and their bodies and it’s related to a natural biological function, so it shouldn’t be viewed as a medical problem or anything else, so it has it’s own line - section 3A.”

It seems some movement has indeed been made on Rosenthal’s version of the bill - according to the Senate website, on May 11, the bill was recalled from the Senate, returned to the Assembly, and amended on third reading. The latest version of the bill in the Assembly does indeed include all of the amendments Rosenthal mentioned above: it would take effect on the first day of a sales tax quarterly period; it would add a new section to the tax code, rather than lumping it in with drugs and medicine; and it maintains the more inclusive language.

These amendments have not yet been included in the Senate version of the bill, according to the Senate’s website, and no changes have been made to the bill since it passed in the Senate last month.