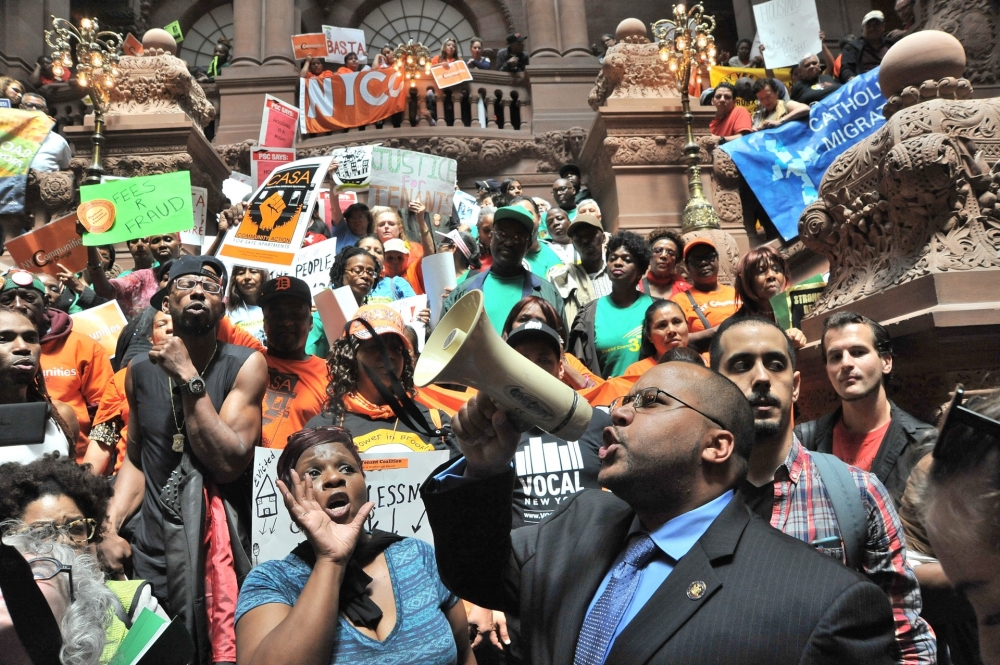 Former Bronx Assemblymember Nelson Castro wants his seat back. Standing in the way, along with the rigors of a campaign and the incumbent, is the fact that Castro served as a government informant for years - to avoid perjury charges.

In April 2013 Castro abruptly resigned his Bronx Assembly seat, shocking his colleagues and constituents by announcing that he had worked for the U.S. Attorney’s office and that his role as an informant was key to convicting former Assemblymember Eric Stevenson for taking $20,000 in bribes from businesspeople building a daycare facility. Castro told Gotham Gazette on Tuesday that he doesn’t believe that bit of his past will come into play as he challenges sitting Assemblymember Victor Pichardo, the man who won his vacant seat, in the upcoming September Democratic primary.

“The only perception that matters to me is that of the voters of the 86th district,” said Castro. “We're gearing up to run, and basically the reason why is that I can't come out of my house without people telling us, ‘We miss you. Why don't you come back?’”

Castro’s return to the political arena comes at a time when the capital is consumed by investigations by U.S. Attorney Preet Bharara. Both recent legislative leaders, Senate Majority Leader Dean Skelos and Assembly Speaker Sheldon Silver, were sentenced on multiple federal corruption charges. Gov. Andrew Cuomo’s massive economic development programs and members of his inner circle are under scrutiny. And, current Assembly Speaker Carl Heastie reportedly faces an investigation into reimbursements he received from the Bronx Democratic Committee.

Castro said that he was motivated to run by what he sees as a lack of constituent services from Pichardo, who he says he does respect. Castro said constituents complain of long lines at the district office and having to make appointments to speak to anyone there. “I saw Victor and told him I don't think he's a bad kid but he needs to be more attentive to the district,” Castro said, adding that Pichardo is seen by many constituents as a staffer who reports to Bronx Senator Gustavo Rivera, who has backed Pichardo in both of his electoral contests.

Castro faced questions from his colleagues and constituents after revealing he was an informant - questions about what his focus was when he was in office. During his last year in office Castro moved one bill. He was still a candidate in 2009 when he agreed to work as an informant and later ran for reelection while still in the same position.

For his part, Pichardo told Gotham Gazette that he is focused on finishing out session and working for the people of the Bronx in Albany. He doesn’t plan to be distracted by electoral matters until session is finished, he said. Lawmakers are wrapping up session in the capital before heading home to their districts and their reelection bids.

Assemblymember Marcos Crespo, who is Bronx County Democratic Chair, questioned whether Castro could legally run for office, given that he pled guilty to perjury. “I am fully committed to Victor Pichardo,” Crespo told Gotham Gazette.

Castro actually faced a number of scrapes with the law before running for Assembly in 2009. The Daily News reported that he was arrested for felony larceny in Michigan in 1989; he pled down to a misdemeanor. In 2003, he was arrested for grand larceny for collecting unemployment checks while being employed; he pled that charge down to petty larceny, repaid the funds, and served three years probation. In 2008, he was arrested for driving with a revoked license, and also had $3,000 in unpaid parking tickets.

As for the perjury charge that led to his work as an informant, Castro stresses that the actual case had nothing to do with his work in the Assembly. The charge stemmed from Castro’s involvement in a district leaders race. Ten people were registered to vote out of Castro’s one-bedroom apartment. Asked about the situation by a special referee, Castro claimed he had no idea that many people were registered to vote there. He also testified he didn’t know the man who in reality served as his volunteer coordinator. That testimony led to an investigation by the Bronx District Attorney and the charges that led to Castro’s agreement to serve as an informant.

Some in the Bronx do see Pichardo as being ripe for a challenge. In 2014, Pichardo claimed victory over challenger Hector Ramirez by only two votes - after a recount. Ramirez accused Pichardo of subverting the vote. But, in the end Ramirez was charged with a 242-count indictment related to massive voter fraud. Some Bronx politicos believe the race was tighter than it should have been despite Ramirez’s alleged voter fraud.

A number of observers wonder whether Castro will actually carry his campaign through petitioning, how he will raise money, and if he has given any thought to what life would be like for him in Albany should he actually win.

Castro said he is used to being out of the good graces of the Bronx County Democrats and expects not to have any union support, often key to marshalling votes in Democratic primaries.

“I think people are afraid of what county can do,” Castro said, referring to the Bronx County Democratic Committee. “I’ve beaten them just by knocking on doors. I will have to do everything by hand. I won’t have unions, but I did it before. I’m not afraid of it.”

It is unlikely Castro will be the only entrant into the primary to challenge Pichardo, and his candidacy seems like a long shot, but there appears to be something else at play in Castro’s run: his desire for a platform to redefine himself. Castro told reporters he was “done with politics” while leaving court after his November, 2014 sentencing. He said he would focus on selling energy efficient light bulbs. But it appears life out of politics didn’t give him the redemption he was seeking.

“Part of why I am running again is to let me say my piece,” Castro told Gotham Gazette. “There was no wire,” he said referencing stories that he wore a recording device when dealing with his colleagues in the Legislature. “I guess I broke an unwritten rule that you are not supposed to turn your back on your buddies. Once I get to Albany I will know how to handle myself. I had no friends there last time. It's not a problem.”