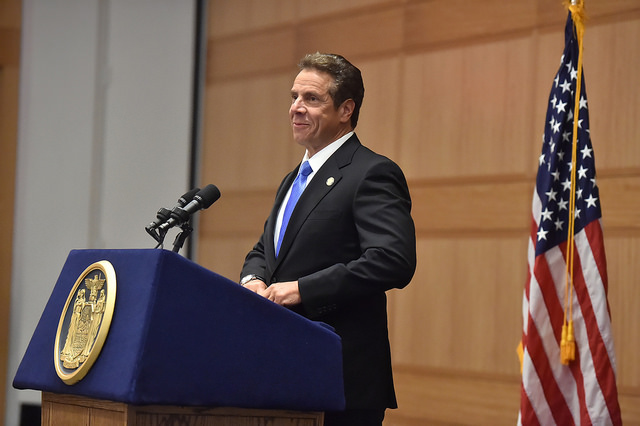 Last year, with ten days remaining in legislative session and confronted with a major ethics reform proposal from Attorney General Eric Schneiderman, Gov. Andrew Cuomo told reporters, "Let me make this as a blanket statement: It is late in the day for anything.”

On Wednesday, with only four days remaining of this year’s legislative session, Cuomo announced a new prong to his ethics reform agenda: an ambitious plan to better regulate the activities of political action committees and limit the impact of shadowy independent expenditures that he says are all too often not actually independent from the candidate they are supporting.

It is a late addition to a fairly long reform agenda the governor has done little to publically support.

After outlining his government ethics and campaign finance reform agenda is his January State of the State address, Cuomo has now held one public event dedicated to reform in the last five months. Speaking at Fordham Law School in Manhattan, Cuomo told the mid-day crowd that “the state Legislature is in session and they are in session until next week. They have plenty of time and they can lead this effort to reform or they can perpetuate the status quo.”

Speaking in bold terms, Cuomo announced an assault on the Supreme Court’s Citizens United decision, which found political campaign spending to be free speech, allowing a flood of outside groups, or independent expenditure committees (Super PACs), to spend limitless amounts of cash on elections across the country. The court did not rule limits on candidate campaigns unconstitutional, but did allow a system to flourish whereby affiliated, but “independent” groups can virtually circumvent those limits.

Decrying the influence of money and the monied on politics and resulting voter alienation that has occurred, Cuomo first unveiled an opinion from his counsel, Alphonso David, instructing state enforcement agencies on how to determine coordination between independent expenditure campaigns and candidates. Cuomo also outlined a bill that would create new regulations, transparency, and restrictions on independent expenditure campaigns that would look to prevent candidates from having direct control over Super PACs by appointing their allies to head them.

The governor made his announcement in New York City rather than in Albany where legislators were in session and appeared to reference Mayor Bill de Blasio, whom he has an ongoing feud with, on several occassion. Once of which was when he said to reporters after the event, “The press asks a politician, ‘are you going to set up an independent expenditure committee,’ and the politician will say, ‘I’m thinking about it.’ You basically asked if somebody is going to commit a crime, and the person said, ‘I’m thinking about it.”

The governor may have been referencing an answer de Blasio gave WNYC’s Brian Lehrer when asked if he was planning to utilize such a group in his 2017 reelection campaign. “Independent means independence,” Cuomo said Wednesday. “You would have to be an independent entity that is not associated, or affiliated, or cooperating, or facilitating with any candidate or any other group.”

When asked, Cuomo said he wasn’t focused on de Blasio. He also declined to provide examples of what led to his new action, saying that he did not want to accuse anyone of a crime, but that his office would provide examples.

The apparent reference to de Blasio, the incessant feuding between the two, de Blasio’s use of political nonprofits to boost his agenda, and Cuomo’s at times vague language led to some confusion about whether the governor’s new push would target issue advocacy campaigns like The Campaign for One New York, a group founded by de Blasio allies and lobbyists to further the mayor’s agenda. That group is currently under federal investigation as it closes down amid controversy.

Cuomo had a similar group called the Committee to Save New York that took money from business groups to lobby for the governor’s agenda. That organization shut down in early 2013 after calls for disclosure.

While Cuomo said after his speech that such groups would be included in what he was proposing, materials provided by the administration appear to show the governor’s legislation will only focus on independent expenditure groups that operate during electoral campaigns.

A Cuomo administration official later told Gotham Gazette that it would apply to groups that engage in political activity and that the administration is not prejudging what any group might do. Brent Ferguson of The Brennan Center for Justice said that he believed Cuomo’s legislation would only cover nonprofit advocacy groups, a certain class of 501(c)4s, if they engage in “political activity” during campaign season. Throughout his controversial use of The Campaign for One New York, de Blasio repeatedly pointed to it being in support of an agenda, rather than a candidate (so not technically a Super Pac). The group was of course supporting de Blasio’s agenda, though not exactly his reelection effort.

The bill does appear to have bearing to another of the several investigations targeting de Blasio. The United States Attorney is reportedly looking into whether a group opposing horse carriages in Central Park coordinated with de Blasio to attack mayoral candidate and former City Council Speaker Christine Quinn.

Cuomo has enjoyed the backing of charter school and real estate groups that frequently use independent expenditure campaigns to boost their candidates. While Cuomo railed against the Citizens United decision, he said that within its constraints states could act to limit the impact of independent expenditures by cracking down on illegal coordination. He also said he wants to see Citizens United overturned.

The timing of Cuomo’s new push confuses and frustrates some reform advocates. They say Cuomo hasn’t rallied public support for his proposals to limit outside income for legislators, create a public campaign finance system, or to close the LLC loophole - all parts of his reform agenda unveiled in January.

Cuomo unveiled a package of eight bills designed to close the limited liability companies loophole late last month. The bills provided limits on donations from LLCs to various combinations of elected offices - the Governor was covered by all of them. They also require more disclosure from LLCs.

Advocates see independent expenditures as a minor issue in New York where Super PACs are not rampant in state elections. “Independent expenditures tend not to be particularly as big in New York as say the LLC Loophole or housekeeping accounts,” said Blair Horner of The New York Public Interest Research Group, referring to political party accounts not subject to the same campaign finance limits as candidate campaigns. “Here at the end of session I think lawmakers should be focused on ending corruption and this connects in the most tangential way.”

Dick Dadey, executive director of government reform group Citizens Union, complimented Cuomo’s efforts, praising “a novel and innovative campaign finance reform idea is a welcomed salve to the growing number of independent committees through which a select number of large donors control much of the political dialogue and activity.” Dadey said, though, that today’s announcement “should not distract from the more immediate task at hand of addressing the crime wave of corruption in Albany” and called for passage of previously proposed measures.

Some note that the push on independent expenditures may be a way to find common ground with the Legislature which has been fairly recalcitrant on reform issues.“The timing is odd in a sense because here we are at the end of session, the public is clamoring for Albany to address public corruption and the people at the Capitol are talking about anything else,” said Horner. “So to do it during the last week of session seems strange unless there is interest by the legislative leaders to do it. And if there is why not do the announcement in Albany?”

“Campaign and election reform is a key component of ethics reform,” Flanagan said. “Therefore, we welcome the opportunity to review and discuss the Governor’s proposal as part of our effort to arrive at a comprehensive reform package that rebuilds the public trust, and includes action on issues previously raised by members of the Senate Republican Conference.”

Heastie was also tentatively supportive while also touting the Assembly’s past work on election and reform issues. “We recognize the need for additional reform that will offer New Yorkers transparency and accountability,” wrote Heastie. “We agree with Governor Cuomo that this is a priority that must be addressed before the close of the 2016 session. It is our goal for the voters of this state to have full faith and trust in their government. There is no question that campaign finance reform and taking a hard line against corrupt officials who abuse the public trust are the keys to achieving that goal.”

John Kaehny, executive director of Reinvent Albany, welcomed the governor’s focus on independent expenditures but said he thought it was the wrong fight for the time. “We support the governor's call for curbing Independent Expenditures --- they are as bad as he says. But independent expenditures played no role in the Silver or Skelos' corruption capers, and play no role in the huge pay to play and conflict of interest scandal engulfing the governor's Upstate economic development programs,” Kaehny said in a statement. “The governor is not wrong in wanting to curtail the corrosive plague of Independent Expenditures, but he is also conveniently ignoring reforms that would directly address the multitude of concerns raised by the probe in the state's Upstate economic development programs.”

Cuomo and legislative leaders are expected to finalize any end of session deals next week - the last scheduled session day is Wednesday, June 15. Many believe that the only hope for government ethics reform is agreement on pension forfeiture for elected officials convicted of public corruption.

Horner said that he believes that Cuomo is allowing one of the biggest opportunities for major reform in decades to slip out of his hands. “The only reason any ethics reform passed in the last few years is because of the governor, but he has never been all in [this year],” said Horner. “This year we have our Watergate moment and we may end up with parking tickets for the burglars - nothing on the scale of what happened with Skelos and Silver.”