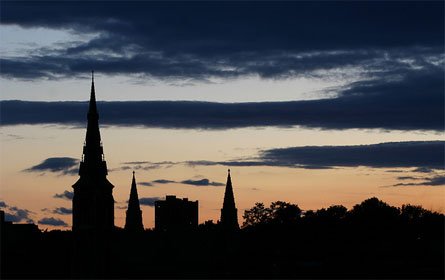 Photo by B. Campbell

It was quiet at the Citizen Action headquarters on Central Avenue in Albany Tuesday night. "We just have a few people out there closing up some polling places," a young woman said as she stacked campaign fliers. Staffers and volunteers had just finished phone-banking Arbor Hill and West Hill, the heavily minority section of Albany. Citizen Action wanted to make especially sure that voters who came out to support Obama in 2008 would make the trip to the polls again this time. The group's activists said they were pleasantly surprised that everyone they reached out to from their lists had already voted.

Perhaps though, they should not have been surprised. Probably no place in the state would be affected as much by yesterday's state elections than Albany. It is, of course, is a town that survives almost exclusively because of state jobs and is considered a bastion for unions. And it also is a place whose name has become almost synonymous with dysfunction and the seamy side of government.

Citizen Action staffers were pushing especially hard to get support for State Sen. Eric Schneiderman, running for attorney general. Polls showed him in a dead heat with Republican Dan Donovan, and upstate supporters in Citizen Action worried that Schneiderman hadn’t reached enough people. The group is part of a large network of unions and activist groups that support Schneiderman and worked with him closely in the past.

On Monday, Andrew Cuomo made a last-minute stop in Albany with Schneiderman in a bid for votes. With polls looking close, Schneiderman was thought to need more of a Cuomo boost. Cuomo took the opportunity to defend the city of Albany, saying that Albany Mayor Jerry Jennings was tired of hearing "Albany" used as a derogatory term. Ironically, most of the crowd was made up of union members; both Cuomo and Paladino have used "union" as a dirty word during their campaigns, promising to cut labor contracts and fire state workers.

At Democratic headquarters Jennings, a confidant and die-hard supporter of Andrew Cuomo, strutted about waiting for the returns to come in. Through most of the election season, the slate of candidates in Albany, which is known for its Democratic machine politics, were thought to be safe. Then came a surge of Republican support and a misstep by Sen. Neil Breslin. Breslin had been pulled over and was administered a sobriety test which he passed. No breathalyzer was given. A Breslin spokesman denied Breslin had been drinking but later, in an interview with a Times Union reporter, Breslin said he had had "a couple" glasses of wine before driving home.

Some Democrats worried that they could now lose his seat as well as one or two Assembly seats. As election night began, Democrats seemed nervous.

The news came quickly that Cuomo and Sens. Kirsten Gillibrand and Charles Schumer were likely victorious. And soon after came word that all the Albany-based incumbents in the legislature also were winning. All remembered to thank the labor groups that were in charge of getting out the vote. "It is no mistake that all of the candidates thanked labor tonight," said Albany County Democratic Chair Dan McCoy.

The union members know all too well that Cuomo as well as Paladino are have been pledging to do battle with labor. Off the record, a number of legislators worried that David Paterson has been doing Cuomo’s "dirty work" by starting to lay off state workers this year. They fretted over Cuomo's stance that labor must make concessions and openly wondered whether Cuomo would run into a brick wall in trying to battle unions.

A few staffers and politicians considered whether Cuomo might like to see a Republican Senate, which could prove more amenable to his budget cuts. It is Assembly Speaker Sheldon Silver and his loyal Democratic majority that is expected to battle Cuomo over reductions in services. Some Assembly members were already sniping at Cuomo -- albeit off the record.

The Senate in the Balance

Meanwhile, in surrounding counties, Democratic challengers to long-term Republican Senate incumbents waited to see if they could pull off major upsets. Earlier in the year it seemed that Sen. Roy McDonald, who replaced former Sate Majority leader Joe Bruno, and multiple-decade incumbent Hugh Farley in Schenectady County were vulnerable. Democrats led by Sen. Liz Krueger touted the two female candidates challenging the Republican incumbents as part of the 16 Percent and Rising initiative. But neither woman was successful.

The Democrats grew more disappointed as the night wore on and the numbers crawled in. They fretted over the attorney general’s race and wondered whether Cuomo had done enough for Schneiderman; most of them griped that he he had abandoned DiNapoli, who he did not endorse.

The numbers kept creeping up for both Democrats. Schneiderman won. DiNapoli declared victory in the wee hours of the morning, but his opponent, Harry Wilson, issued a statement saying he planned to wait for absentee ballots and a possible re-canvassing.

As the night went on, the fate of the State Senate became less and less clear. As of this writing, the Senate was in a dead heat, 29-29, with four districts still being contested. The 7th, 37th, 40th and 60th districts were too close to call.

In the city, in a bit of an upset, Tony Avella defeated Republican Sen. Frank Padavan, and Democrat Joseph Addabo won a hotly contested race against Republican Anthony Como. Both Democrats and Republicans agree that the race between Democratic Sen. Suzi Oppenheimer and Republican Bob Cohen in Westchester is too close to call. The Senate could go to either party at this point -- or end up split 31-31. Republicans have declared that they are in charge of the Senate, while Democrats counter that they are. Whatever happens, it is likely that there will be recounts and legal challenges that could leave the fate of the Senate in the air for months.

Regardless of who controls the Senate, very little will have changed in New York. In the end, the "throw the bums out" rhetoric did not make much difference. Democrats who were in charge retain control of all the major state-wide offices, and they still enjoy a large majority in the Assembly. The question now is whether the Democrats will act any differently now, with a new governor, than they have in the past.

"Were you at all worried?" a constituent asked a Democratic legislator as they discussed the Tea Party movement as the victory party at the Polish American Citizens Club wound down. "This is Albany. I wasn’t worried for a second," the politician said, and chuckled.