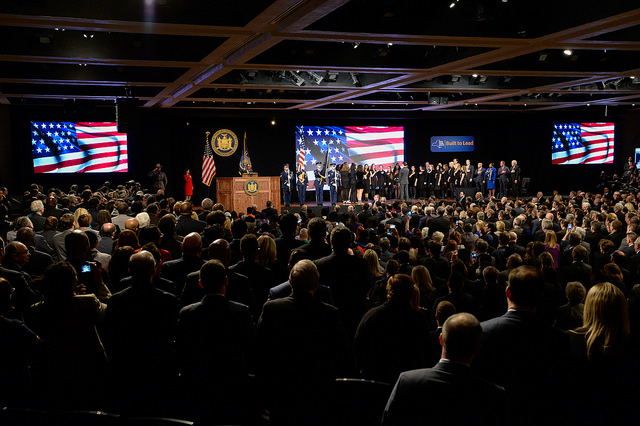 After spending most of what was scheduled to be the last day of legislative session in stop-and-start negotiations, Gov. Andrew Cuomo and legislative leaders appeared on Thursday to reach a framework deal on several big-ticket items, though legislators will continue to negotiate, debate, and vote on Friday.

After a few issues had been decided on Wednesday, concept agreements emerged Thursday on the process of stripping corrupt lawmakers of their pensions; extending mayoral control of New York City schools for one year; and increasing disclosure requirements for independent political committees.

Democratic Assembly Speaker Carl Heastie cautioned the deal was only a “framework” around 8 p.m. and cautioned he didn’t know when an official announcement would be made.

Legislators are expected to return early Friday to continue voting on a host of legislation--most of which is fated to only pass one house. As Cuomo, Heastie, and Republican Senate Majority Leader John Flanagan work through deals on a variety of issues, the two majority leaders will continue to discuss them with their conferences, but things tend to move quickly as session ends, with new legislation given little time for review.

The Thursday evening deal is likely to be touted as a significant movement toward fixing Albany’s ethics crisis, though reform groups and many legislators feel independent expenditures hardly rank as a major issue compared to other problems with Albany’s campaign finance laws and feel that pension forfeiture is a superficial response to an ethics crisis that needs systematic reforms. While it is a welcome additional punishment for unethical behavior, many say, it does not create the type of preventative measures to limit pay-to-play culture and conflicts of interest.

The Senate and Assembly reached a deal on pension forfeiture last year--the Senate passed it but the Assembly balked after facing pressure from unions that were concerned their members were subject to the change along with legislators. The current deal would see the Senate pass the Assembly version that has a narrower scope of who would be subject to forfeiture upon a corruption conviction.

Meanwhile, legislators say an extension of mayoral control will be tied to other issues that have not become completely clear. None of Thursday's deals are final as no bills have been printed.

The deal is also said to include the release of $150,000 in supportive housing funds. Cuomo included $1.9 billion in funding for supportive and affordable housing in the budget but left the details to be decided by a memo of understanding with the two legislative leaders. It appears Senate Republicans have balked at releasing all of the funds until they get a renewal of the controversial 421-a tax credit.

Advocates used the day to express exasperation with the deal-making process that routinely leaves major issues until the last minute, and beyond, with both parties taking issues hostage.

Shelly Nortz, deputy executive director of policy at The Coalition for the Homeless, lashed out at Cuomo on Thursday for not prioritizing the signing of the MOU to detail how to spend the $1.9 billion in housing funds.

“This is far more than a failure to effectively address homelessness - it betrays the hypocrisy underlying Andrew Cuomo's perennial empty promises to the homeless,” wrote Nortz. “Gov. Cuomo, whose promises to the homeless have as much credence as a degree from Trump University, needs to show that he understands that promises mean nothing if you can’t keep your word. Absent the execution of the MOU to release the funds he himself included in the budget, Gov. Cuomo no longer has any claim to be a friend to the homeless or an expert on the issue.”

Many legislators who care about the issue express a sense of resignation. Sen. Mike Gianaris, Deputy Democratic Conference Leader, said he hoped the MOU funds will still be available next year, saying that when Democrats win control of the Senate chamber they will make sure funds are allocated. In theory, the MOU could be signed any time, but virtually no one thinks it will be signed before January if it is not signed by the end of session this week.

Gotham Gazette reported earlier this week that the housing funds were being linked to the controversial 421-a tax credit by Senate Republicans. There is speculation they are holding on to the MOU to negotiate a 421-a renewal next year.

On ethics and campaign finance reform - like closing the LLC loophole, limiting legislators’ outside income, and more - good government groups are exasperated and have resorted to telling voters to simply vote out incumbents who haven’t supported reform.

Meanwhile, there has been a good deal of negotiation to try for a compromise on legalizing and regulating daily fantasy sports. Legalizing widespread car-hailing apps like Uber and Lyft appears to have hit a wall, however.

There was some progress made in both houses on other issues on Thursday. The Senate passed a package of legislation designed to fight opioid and heroin addiction, while the Assembly is set to take up the legislation before the end of session.

Senators also appear set to vote on a bill that would extend the time period residents have to sue after being exposed to contamination. Republican Sen. Kathy Marchione, who sponsors the bill in the Senate and represents Hoosick Falls, where there has been a water contamination crisis, amended her bill yesterday, decoupling it from the Assembly’s bill and thereby assuring its failure. Marchione faced intense pushback from Hoosick Falls residents and environmentalist actor Mark Ruffalo, among others. Late last night Senate Republicans restored the bill to its original form and appeared set to vote on it late Thursday evening.

The Senate also unanimously passed a bill that will require the state to pay for indigent defense services in all counties of the state. Sen. John DeFrancisco, the Republican sponsor of the bill, was lauded by a number of Democrats who he is normally at odds with. The Assembly is expected to pass the bill before the end of session--when that end will come is unclear as negotiations continue to tumble forward.