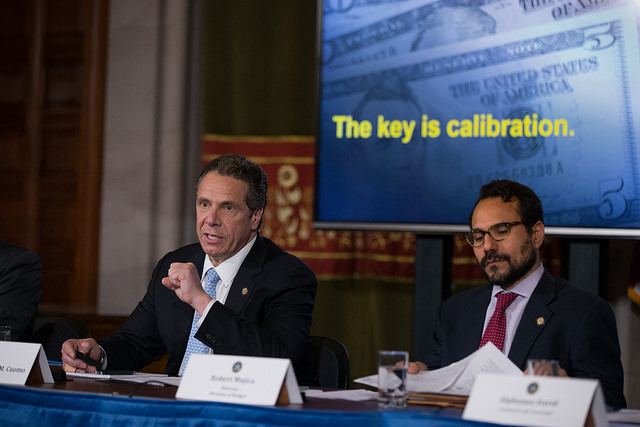 Gov. Andrew Cuomo appears to have given up on the state Legislature taking action to close the notorious LLC loophole, which allows wealthy donors to subvert campaign finance laws by creating multiple limited liability corporations that can each give more than $60,000 to a candidate’s campaign.

According to The New York Times, Cuomo said this weekend that it would be up to the public to close the loophole through a constitutional convention.

In January, the governor made closing the LLC loophole a key plank of his government ethics reform package. He and his representatives have said repeatedly that Cuomo wants the loophole closed. In late May, after months without mentioning the loophole unless prompted by reporters, the governor unveiled “a menu” of eight bills that would partially close the loophole for various combinations of campaigns for elected positions -- all of the bills would have impacted gubernatorial candidates, including the incumbent governor, who has been the biggest beneficiary of LLC giving.

“The people of New York are demanding change and it’s time we took action to restore the public trust by closing the LLC loophole and bringing fairness to our campaign finance system,” Cuomo said in the May 24 statement announcing his bill menu aimed at closing the loophole that has allowed tens of millions of dollars into campaign accounts. “For years, I have proposed closing the LLC loophole – one of the most egregious flaws in our campaign finance system – and every year the bill has stalled.”

According to Cuomo, Senate Republicans are unwilling to act on the loophole because they rely on corporate money. The legislative session ended with what many reform advocates see as minimal ethics reforms, highlighted by a move toward stripping pensions from officials convicted of corruption. In his first post-session remarks, the governor told The Times that there is no path to closing the LLC loophole through the Legislature and that it must be done through a constitutional convention.

“There has to be a dose of reality in the assessment,” Cuomo told The Times. “It is tantamount to political suicide for the Republican Party in this state because they believe it ends corporate money, and only union money would come into the system, which would help the Democrats.”

He added: “The people are going to have to do it,” referring, according to The Times, to a constitutional convention.

A number of reform advocates and legislators who support closing the loophole were taken aback by Cuomo’s comments and their meaning in terms of his pursuit of reform. Cuomo made little public effort to move the multi-faceted reform agenda he proposed in January and instead appeared to move the goalposts for reform toward the end of session when he announced he wanted to tackle independent expenditure campaigns, something Senate Republicans found much more appealing than restricting legislators’ outside income or closing the LLC loophole.

“It sounds like the governor is saying he can't get it done,” said Democratic Sen. Liz Krueger of Manhattan, who is party to a lawsuit brought by reform groups and current and former legislators against the State Board of Elections to close the loophole. “It sounds like the governor is saying ‘I'm incapable of reforming Albany and we have to leave it up to a constitutional convention,’ and I don't know that he is wrong.”

Dick Dadey, executive director of government reform group Citizens Union, said he is unwilling to wait for a convention to address the loophole. “His comments personify his frustration not being able close the loophole and point to a goal too far in the future to accept,” said Dadey. “We can’t rely on a convention that we don’t know will be called.”

Voters have the ability to approve a constitutional convention every 20 years. The next vote is scheduled for November 2017. If voters were to approve it, they would vote again the following November to select delegates to represent them at the convention, which would actually get underway in April 2019. Delegates would meet to debate reforms to the constitution that could focus on anything from money in politics to the state’s civil rights mandates. Voters wouldn’t get to vote on proposed changes from the convention until November 2019.

There is no guarantee that closing the LLC loophole would come up during a constitutional convention or make it to a final vote.

“The Board of Elections created this loophole and they can fix it,” said Blair Horner of the New York Public Interest Research Group, referring to the state BOE’s 1996 ruling that opened the loophole. “These LLCs have been at the center of major corruption scandals so it isn't like this is an academic problem,” said Horner. “It’s a real problem.”

Not only does Cuomo’s suggestion that a constitutional convention is the only way to close the loophole discount the lawsuit Krueger is involved in and mean that change couldn’t possibly occur until November of 2019, but it also appears to fail to factor in the possibility of Democrats winning the Senate majority from Republicans this fall. Democrats in the Senate and Assembly both claim to support closing the LLC loophole. The Assembly, which is controlled by Democrats, has voted a number of times to close the loophole while some Senate Democrats have tried to force a vote on closing the loophole in their chamber to no avail.

“I guess seeing the Senate Democrats take control of the Senate isn't a way he sees to get things done,” said Krueger. Cuomo, a Democrat, has been criticized over several years for not doing enough to help Democrats take the chamber and for being too close to Republicans. Cuomo has touted his ability to productively work across the aisle.

Mike Murphy, spokesperson for Senate Democrats, said closing the LLC loophole is at the top of their agenda. “Senate Democrats have been fighting to close this loophole for years only to be rebuffed by our Republican colleagues. When we take the majority this will be one of the first things we pass. The people of New York deserve a government that they can trust.”

John Kaehny of Reinvent Albany said at the most basic levels he sees Cuomo’s comments as the governor giving up on reform, but he also sees it as Cuomo letting Senate Republicans off the hook on an issue that could be used to help Senate Democrats win control of the chamber.

“It means the governor is not going to use the LLC loophole as a campaign issue against Senate Republicans. He could beat the Republicans over the head with the LLC loophole because the Democratic-controlled Assembly and Senate Democrats support closing the loophole, as do all of the watchdog groups and independent experts and editorial boards,” said Kaehny.

Cuomo’s office did not respond to requests for comment around whether Cuomo did indeed mean that closing the LLC loophole would require a constitutional convention and whether he was discounting the possibility of Democratic control of the Senate.

Many believe Cuomo prefers governing, as his father did, with a Democratic Assembly and Republican Senate, allowing him to pass more conservative fiscal measures when necessary.

Dadey agreed that Cuomo’s comments appear to ignore the possibility of change in the Legislature. “The Governor’s position does not take into account Senate control,” said Dadey. “This lets the Legislature off the hook.”