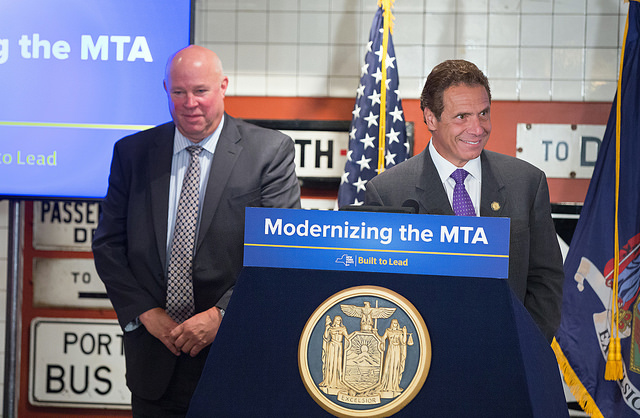 Governor Andrew Cuomo has made mass transit a major focus of late, holding a series of events over the past year regarding airport redevelopment, railroad expansion, new transportation hubs and vehicles, and more. Early last month he described the Metropolitan Transit Administration (MTA) as a new “personal priority” and announced an effort to modernize the agency, beginning with the purchase of over 1,000 new subway cars.

This, with the accompanying significant funding allocation toward the MTA, is something of a change of course for Cuomo, who has a history of diverting money from the MTA. Now, the governor’s ambitious transit plan includes updating the MTA, repairing tunnels and bridges throughout the New York metropolitan area, building a new Tappan Zee bridge, rebuilding LaGuardia Airport and Penn Station, and creating a new tunnel under the Hudson river.

With federal corruption convictions having toppled two recent leaders in the state Legislature, among other former Albany lawmakers, and investigations into his own administration, Cuomo appears to have seized on a concrete, quality-of-life issue in mass transit that has also been brought into focus by the dire state of the state’s transportation infrastructure.

Cuomo’s commitment came after calls from transit advocates, business people, and lawmakers urging the governor to allocate funding to the MTA’s five-year Capital Program in the state’s budget to meet the staggering needs outlined by the authority. After spending $1 billion in the first year of the Capital Program last year, Cuomo agreed to provide an additional $7.3 billion last fall. New York City will provide $2.5 billion, and the MTA, a state body whose chair is appointed by the Governor, will itself provide $17 billion.

At a June event celebrating groundbreaking at “the new LaGuardia Airport,” Cuomo put the magnitude of his “$100 billion infrastructure program” on display, calling it “the largest reinvestment in New York’s infrastructure in modern history,” which, he said, was “long overdue.” A key part of it, the governor said, “is a $27 billion investment, largest capital investment in history in the MTA because that is going to be the future. Moving more and more people through mass transit rather than through cars and I am proud to be the governor who made the largest investment in the MTA’s history.”

While some transit advocates view the governor’s recent embrace of the MTA as a victory, not all are reassured by the promise of capital funding.

“It was a great win in many ways that the governor said he would allocate the necessary funding at least this year to the capital plan,” Masha Burina, an organizer for the advocacy group Riders Alliance, told Gotham Gazette. “But our major concern going forward that we still have and that we're going to be pushing for in our campaign is to get a sense of where this money is coming from.”

Burina said the push to secure budgetary funding for the Capital Program was aided by Assembly member James Brennan, a Democrat from Brooklyn, who penned a letter signed by 35 other Assembly members and sent to Cuomo in February. However, Burina added that Cuomo has not detailed how the state will pay for the capital program.

Without a new source of funding, the state—or the MTA—will have to borrow. The MTA is already over $35 billion in debt. Because one of the only revenue generators within the MTA’s control is passenger fares, Burina said she is worried going further in debt would make a looming fare hike to $3 even more likely (the current cost of a subway or bus ride is $2.75).

But the Fiscal Year 2017 budget stipulates that the state can only provide its share of the funding via a revenue stream or direct payments, which means no debt related to the state’s contribution to the Capital Program can be passed on to the fare-payer, according to Morris Peters, a spokesperson for the New York State Division of the Budget.

Peters also touted the $3.9 billion state contribution already signed into law as part of the past two years’ budget, pointing out that this places the state ahead of schedule in providing its $8.3 billion pledged contribution.

“Through the Enacted Budget, the state’s commitment of $8.3 billion in new funding for the MTA is now law. Anyone who thinks this isn't a priority clearly doesn't know what they're talking about,” Peters said in an email to Gotham Gazette.

Nonetheless, transportation advocates are likely to continue questioning where exactly the money is coming from and pressuring Cuomo as they have in the past, urging the governor to find ways to pay for the capital plan, according to Burina.

“It's great that he's come out and stepped up saying that these are his priorities, but we want to make sure that this doesn't translate into unsupported debt borrowing,” Burina said.

Several possible options for funding exist, but none have yet been embraced by the governor. One possibility is raising motor fuel taxes, which brought in $503 million for the state last year. But Nicole Gelinas, the Searle Freedom Trust Fellow at the Manhattan Institute, said raising the gas tax is unlikely to provide enough funding for the Capital Program.

“I don't think we'll get much from a higher gas tax,” Gelinas said in an email to Gotham Gazette. “We could double it, and take in another half billion [dollars], but that doesn't solve the MTA's problems.”

Increasing motor fuel taxes has not been endorsed by Riders Alliance and has drawn skepticism from elected officials who support increased transportation spending, especially since motor fuel tax revenue is expected to decrease by $9 million in the coming year.

“All our public policy is, quite properly, aimed at saying ‘use fewer gallons of gasoline.’ We want to be more energy efficient, we want to have less fumes and we want to have more miles per gallon,” Jerrold Nadler, a Democratic congressman from Manhattan, said at “On Transportation,” a forum hosted by City & State NY at the New School on Tuesday. “So the amount of revenue in real terms from the gasoline tax is going down steadily, and we have to substitute for it.”

Riders Alliance has, however, endorsed the Move NY Fair Plan, which would increase tolls in areas of high transit availability like major East River bridges and decrease tolls in areas of low availability, including bridges over the Harlem River. But the plan would generate “only” one billion dollars per year for transit projects through 2019, as well as $375 million per year for road and bridge improvements during that time.

As advocates continue to push for a source of funding for the MTA, Riders Alliance hopes to use Cuomo’s “prioritization” of transit to gain momentum for more specific causes they’ve spearheaded in recent months, including compiling a plan to support commuters affected by the L Train’s upcoming closure, subsidizing fares for low-income New Yorkers, and updating the subway signaling system, which would allow for expanded countdown clocks and more trains per track.

And while some have been bolstered by Cuomo’s pledge to be an advocate for transportation, others are less satisfied. New York State Senator Leroy Comrie, a Democrat from Queens who serves on the Senate’s infrastructure committee, said that regardless of its sources of funding, the Capital Program neglects parts of his constituency.

“I represent Southeast Queens, which is a transportation desert. The MTA five-year capital plan addresses no solutions for Queens other than repair and maintenance of the existing bridges that are there,” Comrie said at the City & State forum on Tuesday. “The project for LaGuardia was necessary and important, there’s no access for our community to actually get to work.”