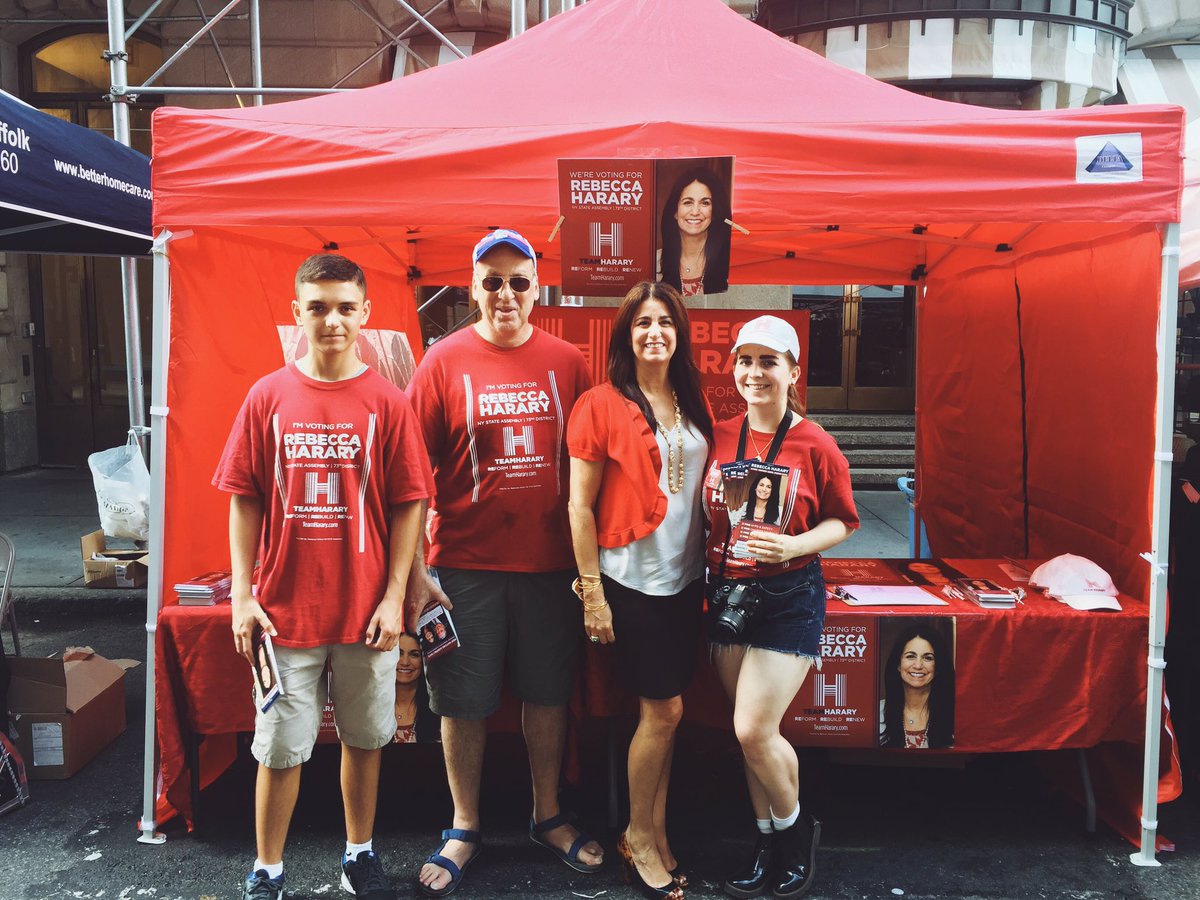 When it comes to the New York State Legislature, most electoral attention is paid to the Senate, which Republicans control by a thin majority and only because an elected Democrat caucuses with them and they have a power-sharing agreement with a five-member faction of breakaway “independent” Democrats. This November’s elections will determine control of the chamber.

In the State Assembly, however, the balance of power is not close. Republicans have been at a massive disadvantage. The Democrats have a stranglehold on the house, which is unlikely to drastically shift come November - Democrats currently hold 104 seats to the Republicans’ 44 (one seat is held by a Working Families Party member and there is one vacancy in the 150-seat chamber). This holds particularly true for seats in New York City, a liberal bastion that helps make New York an overwhelmingly blue state. There are currently only two Republican Assembly members, both from Staten Island, representing New York City’s 66 Assembly districts.

But come November, the Manhattan GOP believes it can make inroads and put not one, but two of their own in Assembly seats on the Upper East Side where Republicans believe that registered Democrats won’t necessarily vote along the party line.

Manhattan Republicans are banking on voting trends from 2013, when Mayor Bill de Blasio’s landslide victory wasn’t reflected on the Upper East Side and he lost the neighborhood to his GOP opponent, Joe Lhota, by double digits.

“The Upper East Side is very Bloomberg-centric,” said Adele Malpass, chair of the Manhattan Republican Party, insisting that the neighborhood tends to vote along more conservative lines. “The Upper East Side is not a progressive spot,” she said. The neighborhood is predominantly white and relatively affluent, and has historically supported Republican mayoral candidates. Malpass hopes her party can tap this sentiment in the upcoming election, and win the 73rd and 76th Assembly districts by defeating Democratic incumbents.

The two districts run side by side on the East Side: District 73 extends from 34th Street to 94th Street, bounded by 5th avenue on it’s west side. On the east, it reaches the river in certain sections but mostly stops at 3rd Avenue where District 76 begins. District 76 stretches from 61st to 92nd Street, and includes Roosevelt Island.

While it may be an uphill battle - incumbents are exceedingly difficult to beat - Republicans see some reason for optimism. "The Upper East Side is where we have the best odds of winning a seat this election, but it can't be done without your support and involvement," Malpass recently wrote in an e-newsletter to Manhattan GOP subscribers.

The 73rd district is represented by Assemblymember Dan Quart, who has held the seat since winning it in a special election in 2011. He’s being challenged by Rebecca Harary, a community activist with a long history of nonprofit work. She founded a school for children with autism and a high school for teenagers with mild learning disorders. She is currently the  founding executive director of the Propel Network, an organization that helps Jewish women enter the workforce. She is a mother of six and grandmother of seven, she said in an interview.

In the 76th district, first-term Assemblymember Rebecca Seawright, elected in 2014, will face off against Jon Kostakopoulos, a writer for financial news website The Street and former director of field operations for John Catsimatidis’ 2013 mayoral campaign. Kostakopoulos is also Catsimatidis’ godson and the supermarket magnate is set to host a fundraiser for Kostakopoulos in late September.

The two challengers believe they have a solid chance to make these races competitive by focusing on a few core issues -- quality of life, public safety, transportation and education -- and they aren’t worried that the Democrats have an enrollment advantage over Republicans in Manhattan. Active registered Democrats in the borough outnumber Republicans 8 to 1, but that ratio in the 76th district is only about 3.3 to 1, and in the 73rd district it's even closer at 2.5 to 1.

“We have an absentee Assemblyman,” said Rebecca Harary about Quart, in a phone interview with Gotham Gazette. “His silence is deafening, and that speaks volumes about the leadership in this district.” Democrats, she said, and particularly Mayor Bill de Blasio, are responsible for rising homelessness and worsening quality of life in the district and across the city. Her opponent, she said, is a company man like most incumbent Democrats. “They’re just going to vote the company line and make no waves,” she said, insisting that there’s a need for an independent voice in the district. “It’s time to ask the real questions,” she said.

Her top priority, besides public safety, is education. She supports charter schools and believes the state should offer tuition tax credits, with increased income thresholds, to parents who choose to send their children to private and parochial schools.

Assemblymember Quart doesn’t seem worried about the challenge from Harary. “I look forward to November,” he said. His plan is to run on the successes of the last five years, he said, pointing to improvement of air quality in the district, sponsoring and passing legislation on criminal justice issues and helping secure $1 billion in additional funding to the MTA Capital Plan for the Second Avenue subway line. “By any objective measure, I’ve been successful in helping my constituents,” he said.

“I run on my record,” he added. “The politics will work itself out.” Quart has a significant fundraising advantage over his opponent. He has raised more than $335,000 for the race compared to Harary’s $59,000. (Quart also has a city campaign account with $104,375 in it for a possible future race, but he said he does not intend to run for any city office in 2017.)

Fellow Democrat Rebecca Seawright is also confident about her prospects, although she’s not being complacent about the race. “I’m a full-time legislator, I take this job very seriously,” she told Gotham Gazette, alluding to the fact that state legislators are technically part-time and allowed to earn outside money, which has gotten some into trouble.

Seawright said she’s had a successful first term in the Assembly majority. “I’ve passed 10 pieces of legislation and seven have been signed into law by the governor,” she said, also touting her 100 percent attendance record.

Refutes Republicans’ assertion that quality of life is decreasing in the district, Seawright said, “I’m extremely proud of the progress that’s been made. We’re constantly picking up the phone and reaching out to city agencies about getting the homeless into shelters, picking up garbage.”

Seawright is also confident that with Hillary Clinton on the top of the Democratic ticket, voter turnout will be robust on the Upper East Side and Roosevelt Island, which falls in her district. One aspect strongly in Seawright’s favor is her opponent’s late entry into the fray. Kostakopoulos started his campaign only a few weeks ago - he’s holding a campaign launch event September 8 - and has yet to raise any money. Seawright has just short of $100,000 in the bank.

Kostakopoulos told Gotham Gazette he got into the race because Seawright would otherwise have been uncontested, and that during her tenure, quality of life, particularly the issue of homelessness, has become abysmal in District 76. “I’ve been there my entire life and I’ve never seen it so bad,” he said in a phone interview, mentioning homelessness specifically.

He doesn’t intend to make an ideological appeal to voters, however. “I’m not running as a Republican or a Democrat even though I’m on the Republican line,” he said. “I’m running as a resident of the 76th district.” Calling himself a “New York Republican” like former Mayor Michael Bloomberg, he said he appeals to voters on the Upper East Side who are socially liberal and fiscally conservative.

If elected, he intends to advocate for quicker completion of the Second Avenue subway, which he said has been perennially delayed under Assembly Democrats. “These career politicians have had enough time,” he said. “Someone’s got to be held accountable.”

Republicans are hoping to see a repeat of the results of the 2013 mayoral race and Manhattan party Chair Malpass is rallying the troops on that message. In an email blast to subscribers, she laid out the strategy and outlined five upcoming events for the candidates, including Kostakopoulos’ campaign launch and fundraiser.

“What we accomplish between now and Election Day will lay the groundwork for winning the Mayor's race in 2017 and making Bill deBlasio [sic] a one-term Mayor,” the email reads. They intend to reach out to independents and moderate Democrats and will use “cutting edge campaign technology” to do so, including merging their voter rolls with internet services and online publications for targeted ads and narrowing down specific buildings and districts to directly reach voters online. It is important that they are funded to do the work, the party wrote.

But relying on the 2013 mayoral voting numbers may be problematic. Steve Romalewski, director of the CUNY Mapping Service at the Center for Urban Research/The Graduate Center, pointed out that just the next year (2014), in both the 73rd and 76th districts, the Democratic candidates won with overwhelming majorities. “I don’t see how the mayoral results have anything to do with the likelihood of a Republican winning either seat,” he said of the Assembly races, pointing out that Democrats have won these districts all the way back to 2000. “That’s just a reality of the New York City electoral patterns,” he said. “There tends to be a vast difference between municipal elections and state elections, and executive branch results and legislative branch results.”

“If the Republican candidates are trying to pin their hopes on the results of the 2013 mayoral election,” he said, “they’ll be sadly mistaken and they should rethink their strategy.”