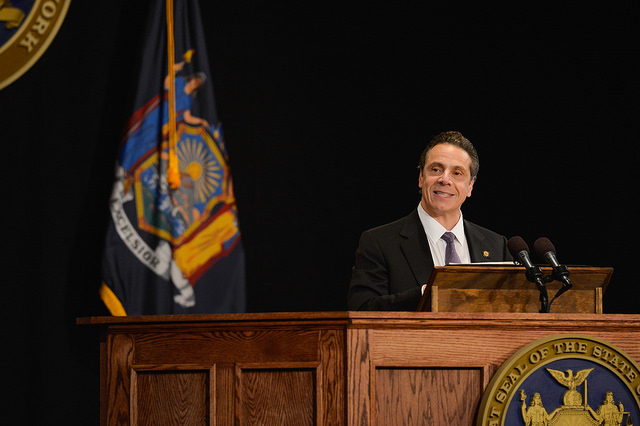 The State Board of Elections is set to consider a set of emergency regulations governing independent expenditure campaigns at its board meeting on Thursday morning in Albany. The regulations will come just two days after state legislative primary elections and two months before the general election. Political action committees (PACs) and Super Pacs, or independent expenditure committees, have already had a significant presence in this year’s primary contests.

The BOE is responding to new legislation championed by Gov. Andrew Cuomo, who signed his controversial reform bill on August 24 after passing it through the Legislature by message of necessity in late June. The bill goes into effect 30 days after Cuomo signs it, thus putting pressure on the BOE to respond.

The law enacts restrictions on how independent expenditure campaigns operate; expands what constitutes illegal coordination with a candidate and limits who can work for Super PACs. The legislation also sets new disclosure requirements for nonprofit lobbying groups and issue advocacy groups - for this piece, the Joint Commission on Public Ethics moved on emergency regulations earlier this year.

On Thursday, the BOE will consider emergency regulations in the middle of an election season that has already seen major spending by Super PACs, especially in New York City where New Yorkers For Independent Action, a pro-charter school group, pumped millions of dollars into Democratic primary contests.

Board members have expressed concern at previous meetings that the law could be disruptive and counterintuitive given that election season is already well underway.

Democratic BOE Chair Douglas Kellner told Gotham Gazette that he isn’t convinced the board needs to act on emergency regulations. “From my point of view I’m not exactly sure why we need emergency regulations that just track the bill, but we will discuss that on Thursday,” Kellner said.

Republican BOE Chair Peter Kosinski said that the emergency regulations are necessary to keep interested parties informed of the changes to the laws relating to independent expenditures and to put the information in one place.

Once the emergency regulations are adopted the public will have 45 days to comment on them.

”The reality is that the emergency regulation idea is related to the fact that we are headed into the November election and people need information about the changes,” said Kosinski. “This does not preclude the normal regulation process or any future changes. We will go through the normal process in a couple of months.” In other words, any emergency regulations will be temporary and then re-evaluated after the election cycle.

Kellner said he also shares concerns about the timing of the bill’s enactment given that election season is already in full swing.

“The board is really between a rock and a hard place,” said Blair Horner of the New York Public Interest Research Group. “If the Governor wanted the law to be in effect for the election he should have signed it in June.” It is unclear why Cuomo waited until August to sign the bill. After unveiling the plan for the legislation during a speech in New York City toward the end of the legislative session, the governor held no public ceremony to sign and promote the bill.

Dick Dadey, executive director of Citizens Union, said the BOE is being “responsible in providing necessary guidance on the law even if it is poorly written and flawed.” Dadey added that “we shouldn’t be changing the rules in the fourth quarter of the game.”

Speaking with reporters in August, Cuomo touted the new regulations. Of not getting everything he wants done on government ethics reform, he also said, “Ethics in many ways is like other activities in life. It's an ongoing pursuit.”

Kosinski, the Republican BOE chair, said that the time for fretting over the implementation timeline is over. “People have to deal with that best they can. These emergency regulations are our effort to inform people of the law so that when people look for guidance on the new laws we give them accurate information,” he said.

Advocates had decried the process by which the bill was passed. Cuomo introduced the measure late in session claiming that it was designed to beat back the Supreme Court’s Citizens United decision, which opened the floodgates for outside money in candidate campaigns. But the bill also included a section forcing non-profit advocacy groups to disclose more of their donors, and to report to the state, through JCOPE, their various communications about legislation, government officials, regulations, and government-related matters.

Like other times he has used them, Cuomo was criticized for his issuance of a message of necessity that preempts the required three-day aging process designed to encourage public review. Legislators received the bill after midnight and voted on it only a few hours later.

Cuomo, who generally controls when passed bills come to his desk for signature or veto, didn’t call the bill up from the Legislature until mid-August after facing public pressure.

The Joint Commission on Public Ethics, which is headed by former Cuomo staffer Seth Agata and is controlled by appointees of Cuomo and legislative leaders, moved on emergency regulations in early August. The part of the bill that deals with sources of funding for nonprofits goes into effect 30 days after the bill is signed.

The new law sets a definition of what is coordination between independent expenditure campaigns and candidates, and according to Kosinski the law could catch some off guard. “There were significant changes going where the state hasn’t gone before in detailing coordination, it was really fleshed out and I think people need to be aware of that going forward.”

Dadey said that he hopes there will be time for the kind of careful and nuanced discussion of the implementation of the law that was denied to the public before the bill was passed.

“I hope whatever is adopted on Thursday does not lead to greater confusion or conflict with existing law,” said Dadey. “We had no time to talk about this piece of legislation as a public, I hope more time is taken to discuss it now that it is law.”

Brandon Muir, executive director of Reclaim New York, an organization focused on government transparency, said that Albany lawmakers waited until the last minute to formulate the bill and then wasted more time signing it. “Because they dodged having a timely, open process, we’re in for another last-second “emergency” push that serves political interests and an agenda that New Yorkers didn’t ask for,” Muir said.