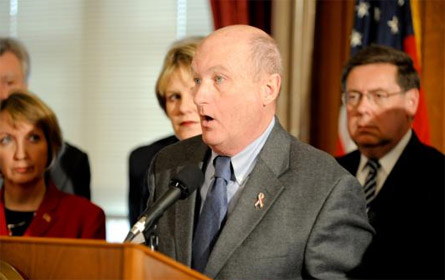 On Dec. 6, former Republican Sen. Vincent Leibell pleaded guilty to one count of obstructing justice and one count of failing to report taxable income on his federal tax returns from 2003 to 2006. Last week, Leibell suddenly announced he was retiring from the senate earlier than expected and told colleagues that he would not take office as Putnam County executive, a post he won in November.

Investigators say that, in 2000, Leibell started receiving kickbacks from an attorney who represented a non-profit that Leibell himself had started. After finding out that he was under investigation this April, Leibell was caught on a wire telling the attorney to lie to the investigators about their arrangement.

Leibell is the latest in a line of Albany politicians who federal investigators have caught illegally taking advantage of their position. His plea comes less than a month after state elections in which almost every candidate ran as a reformer, Now, with the election over, everyone is waiting with baited breath for Andrew Cuomo to be sworn in as governor and unveil his agenda for curtailing the corruption.

The first chapter of Cuomo’s policy book is "Clean Up Albany: Restoring Trust and Accountability," and it speaks of sweeping ethics reform. Cuomo supports setting low limits on campaign contributions from public contractors and lobbyists in an effort to limit pay to play. He wants to greatly lower legal campaign contribution limits as a whole and institute a voluntary public campaign finance system. He also supports a new independent oversight board for the legislature. 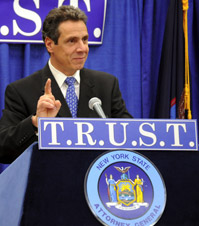 It is unclear, though, how Cuomo plans to implement the package. Cuomo has not indicated whether he has a litmus test for an ethics reform bill or whether he thinks he can get it all done in one bill.

"I think Cuomo will want to negotiate a tougher bill than the one the legislature had last year but I’m not sure where he is going to draw the line," said Blair Horner of the New York Public Interest Research Group.

Former Mayor Ed Koch said Cuomo's first year in office is a do or die year for the ethics and redistricting reforms. "It has to get done this (coming) year or it won’t get done," Koch insisted.

If Cuomo plans to get his reforms through in one major ethics bill, even legislators acknowledge it will take time and a lot of negotiating to arrive at legislation that could pass both houses.

Lost in the Legislature?

The latest scandal has good government groups tearing out their hair in frustration and demanding the legislature do something.

"Someone make it stop!" wrote Horner. "Once again, a state elected official has pled guilty to charges of corruption. The guilty plea by state Sen. Vincent Leibell should reignite voter outrage about Albany. Gov. Paterson -- who made ethics reform central in his State of the State address and then dropped the issue like a bad habit -â€“ should convene a special session to act on comprehensive ethics legislation."

In addition, Horner said the attorney general’s office, which Cuomo still occupies, needs to immediately conduct a review of non-profits that get state funding to make sure no other legislators are benefiting from funneling state money to organizations they control.

Despite such outrage, it remains extremely unlikely that the lame-duck legislature will move on ethics reform this year. What it could do after that could be open to question too.

The legislature passed a package last year that would have required lawmakers to reveal more of their outside income and established a new oversight board to review charges of corruption and conflicts of interest. It would not though have forced lawyer lawmakers like Assembly Speaker Sheldon Silver and then Senate Majority leader John Sampson to reveal their clients, and the members of the oversight board would not have been independently appointed.

Gov. David Paterson said the bill did not go far enough andvetoed it. Good government groups NYPIRG and Citizens Union (whose sister organization publishes Gotham Gazette) supported the legislation, saying that any improvement to the existing ethics laws would be a good step. Common Cause backed Paterson’s veto, saying the bill needed to do more.

Cuomo could choose options that do not require the legislature to act. During the Democratic primary for attorney general, several candidates spoke of having the governor sign an executive order to give the attorney general's office wider power to investigate and prosecute corruption in Albany.

The majority of state legislators caught abusing their office were investigated and prosecuted by federal authorities. An executive order could change that and mean that the federal government would no longer be the only ones holding Albany politicians accountable.

One contender, Eric Dinallo, called on Paterson to immediately sign an executive order. "Call me crazy," he told City Hall, “but I think it’s unlikely that the Albany legislature is going to pass laws for their own investigation and prosecution.”

Paterson did not follow Dinallo's advise, and Cuomo does not seem in any hurry to do so either. He seems determined to give the legislature a shot at cleaning up their mess.

Shortly after the election, Cuomo was asked if he would consider signing an executive order to give Attorney General-elect Eric Schneiderman wide power to investigate corruption in Albany.

"Attorney General-elect Schneiderman ran on a platform of rooting out public corruption, and looks forward to working with Gov-elect Cuomo on a comprehensive approach to this pressing problem," said Schneiderman’s spokesman.

Koch said he doesn’t question Cuomo’s strategy. "I won’t second guess him," said Koch. "He has said he will try to work with the legislature but that isn’t the only option."

But Koch certainly sees Silver as an impediment to Cuomo’s reform plans, whatever they are, in the form of Silver. "At least one of the current Democratic leaders makes $1 million a year from his firm. So what is it for? I know malpractice reform and anything the trial lawyers don’t want never makes it through the assembly," the former mayor said.

At the same time Koch said that he thinks Silver is coming around on the reforms he and Cuomo have proposed.

Cuomo has acknowledged there are things he can do on ethics without the legislature, He cited the Moreland Act, which the legislature created in 1907, and which allows the governor to create a commission with subpoena powers to investigate any part of state government. Past governors have used the act to launch investigations on issues ranging from nursing homes to corruption in local government. Silver called on former Gov. Eliot Spitzer to use the act to investigate Republican Senate Majority Leader Joe Bruno in 2007.

But creating such a commission could ruffle feathers and antagonize the legislature. "He has lots of promises in his books that he needs to fulfill and it all depends on where he decides to spend his capital," Horner said.

The good government group Reinvent Albany issued a report in last month entitled Executive Orders that offered examples of executive orders Cuomo could issue to begin reforming the state. On ethics, they encourage Cuomo to start in his own office -- the executive branch. The group called on Cuomo to issue an order that would require his top staffers to put their ethics disclosure forms online, allowing voters access to information about their investments and other connections. Other measures would require ethics training and limit executive staffers political contributions.

Preparing for a Fight?

Cuomo told the New York Times in a pre-election interview that he does not plan to have a contentious relationship with the legislature, but if history is any indication, major ethics reform won’t pass without a major struggle.

Meanwhile, things may have gotten a bit easier for Cuomo in the Senate, where it seems almost certain that Republicans will be in the majority. The senate Democrats spent their two years in the majority wracked by dysfunction and scandal. The Senate Republican conference is seen as a well-oiled machine and soon-to-be Majority Leader Dean Skelos has said that he is on the same page with Cuomo. "Cuomo and I are in synch," Skelos told The Post. "His issue is going to be getting Speaker Silver on board. What he’s indicated since the election is very much in line with the Republican Senate majority. He wants no taxes and to cut spending, and that’s our theme. We're supportive of his property-tax cap. We should work very well together."

Whether Skelos' support of Cuomo extends to sweeping ethics reform is yet to be seen. Calls to Cuomo’s and Skelos’ offices were not returned.