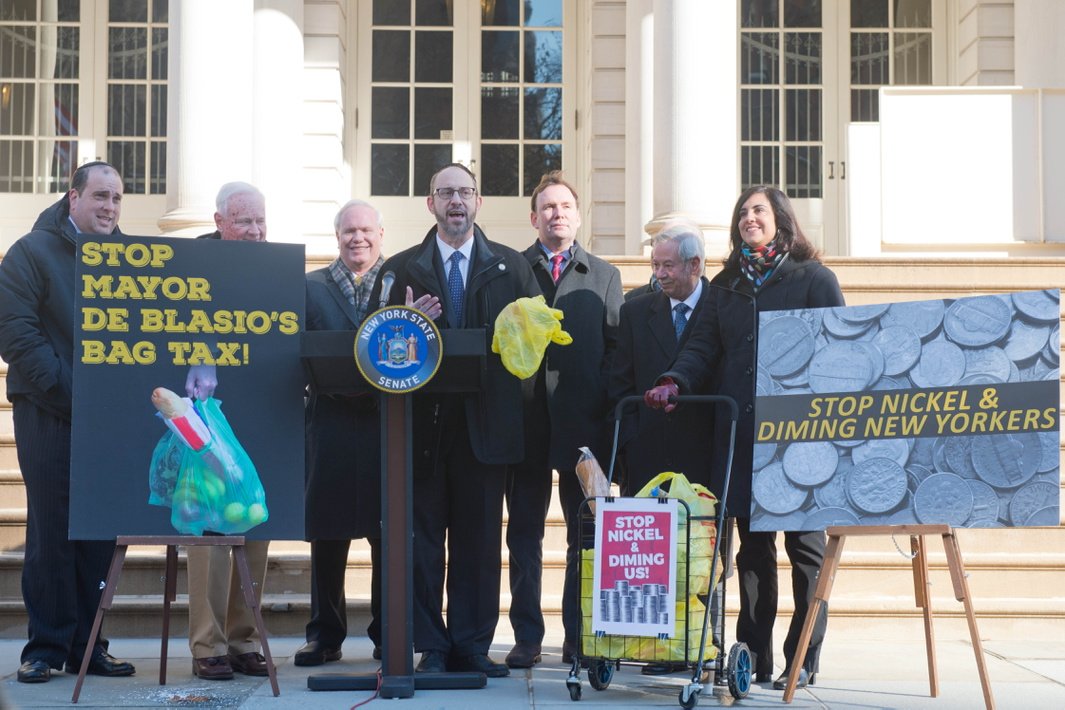 An attempt by lawmakers in Albany to prevent the New York City Council from imposing a fee on plastic and paper bags at retail stores has reignited a debate over home rule and the state government’s interference in the work of a democratically elected local legislative body.

The New York State Senate passed a bill on Tuesday that prohibits “the imposition of any tax, fee or local charge on carry out merchandise bags in cities having a population of one million or more.” The bill, sponsored by Sen. Simcha Felder, a Brooklyn Democrat, directly targets a law passed by the City Council and signed by Mayor Bill de Blasio last year that imposes a nickel fee on those bags and is due to go into effect February 15.

The law, which passed with a relatively slim City Council majority, is meant to reduce waste and environmental damage, as New Yorkers send billions of bags per year into the waste stream While it make exceptions for people on public assistance, its opponents argue that it would be a prohibitive burden on New Yorkers, including poor people and families more broadly.

“Many families have a hard time just getting by, paying for groceries, rent and heat, and now the Mayor wants to shake them down every time they shop just for the privilege of using a plastic bag,” Senator Felder, who represents part of Brooklyn, said in a statement on Tuesday. “Mayor de Blasio, please do not nickel-and-dime New Yorkers with another tax. This will hurt lower- and middle-income families who already struggle. I'm asking New Yorkers to stand up and tell the Mayor that this bag tax has to go.”

Although Felder is a Democrat, he caucuses with Republicans to create a Senate majority. His bill was co-sponsored by three Republicans and also two other Democrats, both members of the Independent Democratic Conference, a breakaway group that shares power in the Senate with Republicans. Felder’s bill passed with 42 votes in favor and 18 against.

For the Democratic Senators who opposed Tuesday’s bill, the plastic bag fee at the heart of the issue was not the only thing under threat. They criticized Felder’s bill for violating the state constitution’s principle of home rule that gives local governments the authority over many of their own affairs, and for doing so only in the case of New York City while making no mention of smaller jurisdictions that have passed similar bag fees.

The Senate bill, Democrats insisted, was narrowly targeted and would set a dangerous precedent for the legislative body. Even the word “fee” became a point of contention. Felder, and those who supported him, call it a “tax” instead and argue that the city has no right to impose it. Under state law, only the state Legislature can approve any new taxes. It is considered a fee because the stores keep it, the money is not passed to the government.

Sen. Liz Krueger, a Democrat from Manhattan, arguing on the Senate floor against Felder’s proposal, wondered “why should we override history, precedent, perhaps the constitution...and take an action that overrides a local government’s law applying only to itself?”

Krueger expressed concern that it reflects political developments at the national level, where the incoming federal administration may seek to unduly interfere in the workings of the state. In a statement after the passage of the bill, Krueger said, “If this bill becomes law, it will set a shameful and dangerous precedent that local solutions to local environmental issues will be vetoed in Albany.”

The bill is now with the Democrat-led Assembly and if it passes there, it would be sent to Governor Andrew Cuomo for his signature. “We would like to see if we can get the city come to an agreement with how the Legislature has raised a concern,” said Assembly Speaker Carl Heastie, at a Tuesday news conference. “But again, we don’t want to minimize the environmental concern that the city has raised.”

State intervention in New York City’s affairs is not novel and has in the past been a source of tension in the city-state dynamic, at times along partisan lines. The state’s Municipal Home Rule Law provides that the state can intervene in a local jurisdiction’s affairs if the locality sends a “Home Rule message” to the state Legislature requesting that certain laws be enacted or if the state Legislature demonstrates that an issue is a “matter of state concern.” Otherwise, the state Legislature cannot pass laws that apply only to a specific locality. That the bill targets New York City is a given: there is no other municipality in the state with more than a million residents. That might give its opponents an opportunity to challenge it as a “special law” rather than a “general law” that applies statewide.

Courts have in the past cited ‘home rule’ as a basis for striking down laws passed in Albany that affect New York City alone. But the language in Felder’s bill refers to an “open class” of locality, rather than naming New York City, and that argument has been upheld by courts, said Richard Briffault, a professor at Columbia Law School who specializes in state and local government law. “The state most likely has the legal authority to ban local plastic bag fees but it is completely inconsistent with the idea and purpose of local home rule,” he said.

Echoing Briffault, Doug Muzzio, political science professor at Baruch College, emphasized Albany’s “virtually absolute” power over New York City. “Under Dillon's rule, cities are creatures of the state,” Muzzio said, referring to a judgement in 1868 by Judge John Forrest Dillon, then-chief justice of the Iowa Supreme Court, which narrowly defined a municipality’s authority as being derived from the state government. “Their powers, their very existence is determined by the state,” Muzzio added. “Albany's power over the city has long been a source of anguish. In his 1861 address before the Common Council, Mayor Fernando Wood called Albany's power ‘odious and oppressive.’ It remains so.”

Muzzio said Senate Republicans were using the authority within their right to enforce their own goals. Complicating matters, though, is that there are more than a dozen Democrats in the New York City Council who voted against the bag fee. Still, this does not change the fact that the city passed its own law on the matter.

The overarching debate is also somewhat complicated by the fact that the plastic bag fee has pitted senators representing New York City against their colleagues from the five boroughs, making them all stakeholders in the issue serving overlapping constituents. Supporters of the bag fee insisted on Tuesday that legislators from outside the city should not interfere with local matters while opponents of the fee pleaded to those outside legislators to help them avoid imposing a new burden on their constituents.

“There are seven City Council members who represent my district,” said Senator Diane Savino, an IDC memebr and one of the state cosponsors who represents Staten Island’s northern shore and parts of South Brooklyn, during the Senate debate. “Every single one of them voted against [the bag fee bill in the City Council]…What they weren’t able to accomplish in the City Council, they want me to be able to deliver for them up here in Albany. They thought it was bad policy for the City of New York. They lost the fight there but they want us to win the fight here.”

Savino also complained that the Senate had been misled by the City Council. The bag fee would have gone into effect in October last year but the Council delayed its implementation after facing strong opposition in Albany. The Senate voted then, as it has now, to ban any taxes or fees on plastic bags. As a result, the City Council struck a deal with the State Assembly to push implementation to 2017 and to revisit the language in the bill. Those negotiations have yet to produce results, with the fee set to go into effect in less than one month. “They did not negotiate in good faith,” said Savino. “We cannot trust them.”

Senator Jesse Hamilton, another IDC member from Brooklyn, who spoke later, stood up against the Senate bill. “Every time we speak about home rule in this chamber, it never applies to New York City," he said. "For this chamber to say the City Council in New York City, they don't know what they are doing, I find that a little offensive.”

Negotiations between the Council and state lawmakers are still continuing, said City Council Speaker Melissa Mark-Viverito at a news conference on Wednesday, in response to Gotham Gazette’s questions. Mark-Viverito expressed her displeasure that the Senate was attempting to thwart legislation that had been extensively debated. “I think it’s unfortunate that New York City is being specifically targeted by the bill that is being presented and that is being discussed and the Senate voted on,” she said.

The day before the Senate took up the bill, Mayor de Blasio vowed to push back against its efforts. In his weekly appearance on NY1, he told host Errol Louis, “I’ll work with the City Council to push this back, because I don’t see an alternative. Do we really want to keep doing something that’s really bad for our environment and takes up lots of fossil fuels as we’re facing climate change. I think the Council was right to pass it and if some of the folks in the state Senate oppose it, what’s their alternative? The status quo is not acceptable.”

A key player in what happens next is a main de Blasio ally: Assembly Speaker Heastie, a Bronx Democrat. Then, there is Gov. Cuomo, not typically a de Blasio friend, who would be forced to decide whether to sign the state legislation if it passes both houses. Cuomo’s office did not return a request for comment about the debate over the bag fee.

City Council Member Brad Lander, a Brooklyn Democrat and one of the prime sponsors of the bag fee legislation, is hoping that either the Assembly will vote down the bill or that Governor Cuomo, known for his positive record on environmental conservation, will veto it.

Lander said it was “mystifying” that the state Legislature would attempt to roll back environmental regulation and dictate a “law of dubious legality” to the city. But he remained open to changing the language in the bill if it meant it could be improved and receive the Legislature’s support. “I’m worried that Albany is going to nullify this very sensible effective environmental policy,” he said. “I assumed that when Suffolk County, not known as a bastion of left-wingers, passed the same bill, and when the City of Long Beach in Nassau County did the same, that that would help members of the Legislature see that this is growing, that there’s support for it, that this is something we should be looking at more broadly.”

Critiquing Felder’s bill, he added, “It is an unconstitutional special law masquerading as a general law. Home rule should be required and I think everyone knows it.”