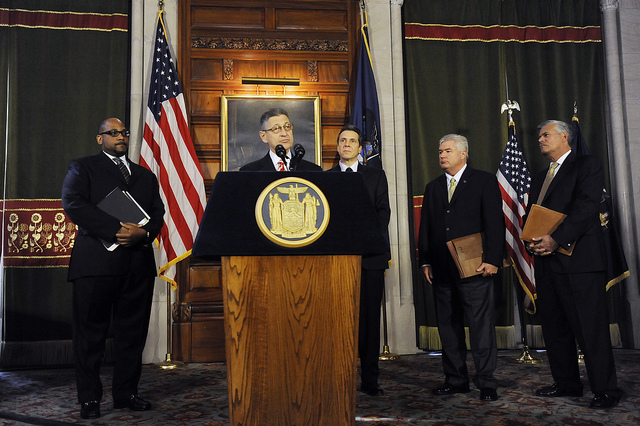 Sheldon Silver & others in 2011 (photo: The Governor's Office)

This November, New York voters will get to decide whether state officials who are convicted of public corruption can be stripped of their pensions.

A government ethics reform bill, jointly passed by the state Legislature Monday for a second time, amends the state constitution and allows the state to reduce or revoke the pension of a public officer that has been convicted of a crime related to his or her official duties.

Under the measure, a public officer convicted of a crime would be subject to a court hearing, which would determine the fate of of the officer’s pension. Current law only allows pensions to be stripped from lawmakers convicted of a crime who joined the retirement system after August 15, 2011, but this constitutional amendment would make the forfeiture apply retroactively to all currently in government.

Because it is a constitutional change, it must pass two consecutive classes of the state Legislature, which this legislation has now done, and then be approved by the voters via ballot referendum.

A public push for the legislation came after it was revealed that disgraced ex-Senate Majority Leader Dean Skelos and ex-Assembly Speaker Sheldon Silver, as well as other corrupt public officials, were granted pensions despite convictions on public corruption charges. As they face prison sentences, Skelos is to receive $95,832 annually and Silver, $79,224 a year, according to The Daily News.

While many state legislators’ initially appeared content to keep the pension (forfeiture) system as is, a public outcry following news reports on the Skelos and Silver pension packages appears to have changed their minds. A 2015 Quinnipiac University poll found that voters supported pension forfeiture for corrupt officials 76 percent to 18 percent.

The new pension forfeiture measure will appear on the ballot November 7 of this year, as voters go to the polls for the general elections in a variety of local offices. In New York City, elections will include those for mayor, public advocate, comptroller, borough presidents, all of the City Council, and others.

On the flip side of the ballot from candidate choices, alongside the pension forfeiture “yes” or “no” question, will be another somewhat related referendum: whether New York State should call a constitutional convention. That question is required to appear on the ballot every 20 years, but New Yorkers have not called for a Con Con, as it is often referred, in several decades.

A chance to rewrite the state constitution, a constitutional convention could result in the enactment of numerous government ethics reforms, from different pension forfeiture rules to the closure of the infamous “LLC loophole,” term limits for elected officials, and more.

The last time a constitutional convention was on the ballot, in 1997, it did not pass, in part due opposition from labor groups and other special interests, which factor into this year’s vote as well. However, not only is there currently a “take back the government” political moment occurring, but the fact that the constitutional convention question will be accompanied by the popular pension forfeiture referendum could potentially have a “coattail effect,” according to Blair Horner, executive director of the New York Public Interest Research Group (NYPIRG).

“From an advocate’s perspective, I think this makes it easier to get it passed,” Horner said of Con Con. “Any sort of political campaign is difficult to run, when you are telling people vote “yes” on one and “no” on the other, because people forget which is which.”

According to the new measure, a court’s decision to reduce or revoke pension benefits would consider factors such as the severity of the crime and whether a reduction might be proportionate to the offense. Public officers include elected officials, direct gubernatorial appointees, municipal managers, department heads, chief fiscal officers, and policy-makers.

“There must be zero tolerance for public corruption, and these ethics reforms are crucial to holding officials accountable and making sure they don’t profit from abusing their positions,” said Senate Majority Leader John Flanagan in a statement. “Now the measure will go to the voters so that they can have the opportunity to join with us in taking a strong stand against corruption.” Flanagan, a Long Island Republican like his predecessor, replaced Skelos as majority leader when Skelos stepped down amid federal charges.

Assembly Speaker Carl Heastie, a New York City Democrat who replaced Silver when Silver stepped down from his long-time speaker post, said similarly. “The Assembly Majority believes that public officials who violate the public’s trust and engage in corruption should face the consequences of their actions including the forfeiture of taxpayer funded pensions,” said Heastie in a statement.

The proposal, sponsored by Assemblymember David Buchwald, a Westchester Democrat, and Senator Thomas Croci, a Republican from Long Island, would also allow the court to order pension benefits to be paid to an innocent spouse, minor dependents, or other dependent family members after consideration of their financial needs and resources.

Good government groups were quick to commend the Legislature’s reform efforts as a step in the right direction. Still, the potential loss or reduction of pension benefits -- a punitive measure -- is less likely to deter corruption than more preventative measures that reformers have called for, like a public campaign finance system and stricter limits on campaign donations. Jail time and other penalties faced by corrupt politicians have appeared to show little effect as state lawmaker after state lawmaker is put behind bars.

“Public officials who break the law shouldnʼt get a taxpayer pension, period. Thanks to Assemblymember Buchwaldʼs and Senator Crociʼs persistent efforts to pass this needed response to our state’s on-going ethics crisis, New York is one step closer to restoring the public’s trust in government,ˮ said Susan Lerner, Executive Director of Common Cause New York, in a statement.

The Legislature also passed a joint resolution Monday that requires any member of the Legislature earning at least $5,000 in income through outside employment to get advisory permission from the Legislative Ethics Commission, to ensure the employment is consistent with the New York State Public Officers Law.

Governor Andrew Cuomo outlined a ten-point government ethics plan earlier this year as part of his State of the State tour and policy plan. Cuomo said he will be pushing reform measures, including campaign finance reform, in budget negotiations with the Legislature. The governor is supportive of the pension forfeiture amendment and has said he is supportive of a constitutional convention, but he did not include it in his 149-plank 2017 policy agenda.