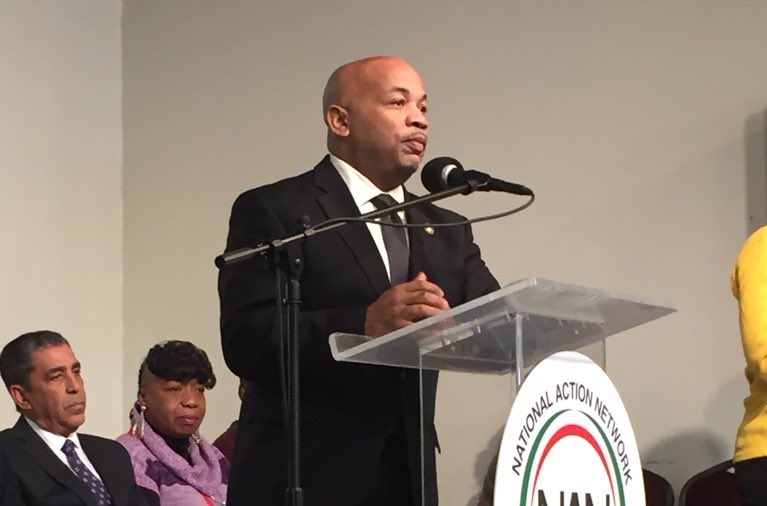 The New York State Assembly passed a slew of bills on Monday aimed at protecting immigrant New Yorkers in the wake of the federal government’s anti-immigrant crackdown which sparked protests at airports around the country last week.

The legislative package, called the New York State Liberty Act, prohibits city and state law enforcement officials from unnecessarily questioning someone’s immigration status, decreases jail time for misdemeanor offenses, and protects the privacy of data collected through New York City’s municipal identification program. The Act, which was first announced at a news conference on Monday prior to the legislative session, was passed in conjunction with the Assembly’s fifth passage of the New York DREAM Act, which provides tuition assistance to undocumented immigrants attending higher education institutions.

The first bill, which dictates how police and government agencies may interact with immigrant New Yorkers, was sponsored by Assemblymember Francisco Moya, a Democrat from Queens who also sponsored the DREAM Act bill. “Immigrants are a vital asset to our nation and their contributions are undeniable in New York's communities, work force, colleges and universities,” Moya said, in a statement. "Our conference has been championing the DREAM Act for years and the stakes have never been higher. We cannot stifle the potential of thousands of New York students in the name of moral high ground."

The Liberty Act would also prohibit state and local agencies from expending resources to help the federal government create or maintain a database or registry based on race, color, creed, gender, sexual orientation, religion, or national or ethnic origin -- a response to President Donald Trump’s so-called “Muslim ban,” an executive order barring immigrants from seven Muslim-majority countries from entering the country. The president’s order was suspended by a federal appeals court over the weekend.

The second half of the Assembly’s legislation wades into a political tug-of-war between Mayor Bill de Blasio and a pair of Republican state lawmakers over New York City’s policy towards undocumented immigrants and what will become of the data associated with New York City’s municipal identification program (IDNYC).

The IDNYC program, launched by de Blasio’s administration in 2015, aimed to remove barriers that some New Yorkers face in obtaining identification -- including undocumented immigrants, the homeless, transgendered individuals, and the formerly incarcerated -- granting them access to important city services. So far, the city has received more than 900,000 applications for IDNYC.

The IDNYC law included a clause allowing the city to flush certain information from the records after two years, or before December 31, 2016, a clause the city was ready to invoke in the wake of Donald Trump’s election and his vow to deport all undocumented immigrants. Assembly Members Ron Castorina and Nicole Malliotakis, Republicans from Staten Island, argued that the city would pose a risk to national security by deleting that information, and sued the administration, making the case to a Richmond County Supreme Court judge that it would violate the state’s Freedom of Information Law (FOIL), which bars the destruction of city records. The lawmakers dispute privacy violation claims noting that FOIL law allows documents to be submitted with redacted information to protect individual privacy. A judge ruled in December that the city could not purge the data until the lawsuit was resolved.

Assemblymember Marcos Crespo, a Bronx Democrat, and chair of the Puerto Rican/Hispanic Task Force, the sponsor of the new bill, noted that New York City residents signed up for municipal IDs under the impression that records would be sealed, so any inquiry into the information should be denied under FOIL exemption. A second bill sponsored by Crespo reduces the maximum sentence for misdemeanor offenses by one day from one year to 364 days, an apparent technicality that could potentially spare thousands of immigrants from deportation under federal law over certain lesser offenses. Some misdemeanor offenses can result in automatic deportation because of New York State's current sentencing standards, a harsh mandatory consequence for misdemeanor conviction. This bill would allow judges to use discretion in whether deportation is warranted for each individual case.

Citing the current anti-immigrant political climate, Crespo said, “Immigrants make substantial contributions to our communities and are being scapegoated by the White House. Now more than ever, we must take a stand against those who wish to cast millions of hardworking people to live in the shadows."

In New York City, Mayor de Blasio has vowed to protect the identities of IDNYC cardholders at all costs. "We are not going to sacrifice half a million people who live among us and are part of our community," de Blasio told reporters days after Donald Trump won the presidency.

Monday’s vote in Albany also marked the fifth time the New York DREAM Act has been passed by the state Assembly since 2010, when the federal version of the DREAM Act -- one that would put undocumented immigrants on a path to citizenship -- died in the United States Senate. In 2014, a version of the New York DREAM Act was voted down in the state Senate by a tiny margin, despite having support of the Independent Democratic Conference (IDC) -- an increasingly powerful breakaway group of Democrats that aligns itself with Republicans. Two democratic senators, Brooklyn’s Simcha Felder, who also caucuses with Senate Republicans, and Ted O’Brien of Rochester, voted against the act. The IDC leadership has indicated that the conference will continue to push for the DREAM Act. IDC member Senator Marisol Alcantara, who was recently elected to the Senate and became the sixth Democrat to join the conference, told Politico New York that passage of the DREAM Act is on the top of her agenda for 2017.

At the Monday news conference, Assembly Speaker Carl Heastie, a Bronx Democrat, said he hoped the Senate would once again take up the bill and pass the DREAM Act. “Let’s hope that this is the last time you have to come up to ask us to get the DREAM Act done,” Heastie told the crowd of activists and Dreamers who had gathered at the Capitol.

When asked how the new legislation and the DREAM Act would interact with Cuomo’s Excelsior scholarship -- which provides tuition free college for middle class New Yorkers, and includes a provision for funding for Dreamers -- Heastie said the plan was a good one, but the Assembly would counter it with their own version of the scholarship.

“Of course we support helping our Dreamers go to college; they’re interconnected issues for us, because we have an overall feeling that we like to see as much access as possible for our young people that are here in the state of New York,” Heastie said. “The premise of the governor's proposal...we’re OK with, but we are going to come out with our own vision.”