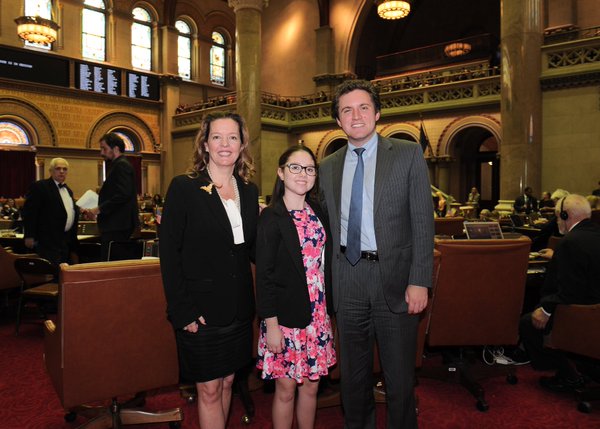 More than 30 members of the state Assembly have signed a budget letter to their Speaker, Carl Heastie, outlining an alternative version of the free college tuition proposal being championed by Governor Andrew Cuomo that they want Heastie to adopt for the chamber.

The Assembly members, all Democrats, aim to make Cuomo’s plan more inclusive of the middle class and to ease proposed aid restrictions for the students at New York public universities who stand to benefit from the program.

The letter, drafted by Assemblymember James Skoufis of Orange and Rockland Counties, recommends three changes to the governor’s Excelsior Scholarship, which Cuomo unveiled in January with the help of former presidential candidate and liberal icon Senator Bernie Sanders. It was the first and anchor proposal of Cuomo’s 2017 State of the State agenda.

Cuomo’s plan guarantees free tuition at city and state colleges for students from households earning up to $125,000 per year, and is designed to make college more accessible and improve graduation rates in New York State. While many low-income students are already eligible for significant state aid to afford college, Cuomo said his plan was to ensure many middle class students could also attend college tuition-free.

However, the governor’s plan has been criticized by college accessibility advocates for its restrictive four-year graduation requirements and “last-dollar” provision that supplements tuition costs only after Tuition Assistance Program (TAP) and Pell grants have been expended. Currently, students who are eligible for full tuition aid are not compelled to use Pell funds for tuition, rather they can be designated for books, transportation, and other college-related expenses. Many are mindful that tuition is not the only college cost and want to see the governor take that into account.

The Assembly members’ letter asks Speaker Heastie to include in the Assembly’s one-house budget a tuition plan that rejects the "last-dollar" component of the Excelsior Scholarship as well as the 15-credit per semester requirement. With Democrats strongly in control of the chamber, they have a solid chance to see their proposal included in the one-house plan -- which, along with the Senate’s budget proposal, is expected to be released later this month. The Senate is narrowly controlled by Republicans, who have been warm to Cuomo’s tuition-free idea, but expressed concerns about how it will be paid for.

The Assembly letter also recommends the scholarship be applied to students from households earning up to $175,000 per year.

Skoufis has proposed a similar “tuition-free New York” bill, which has been introduced in the Assembly every year since 2014, but the legislation never made it past committee. He says many middle class families are excluded under the current Cuomo proposal.

The Assembly member cited the example of a household with two full-time teachers, each of them earning an average of $77,000 per year. However, he noted, if they live in particular zip codes, they may face high living expenses or exorbitant property taxes. “If you have two teachers in your household, by any standard, that’s a middle class household. Yet, they are going to fall above this threshold and get zero help,” Skoufis told Gotham Gazette.

He also criticized Cuomo’s “punitive” provision that would drop students from the program if their course load fell below 15 credits at any point. According to Skoufis’ bill, students would be required to graduate a two-year college within three years or a four-year college within five years to remain in the program -- it is the equivalent of 12 credits per semester. “There needs to be some flexibility here,” he said.

The proposed changes echo some of the criticisms of the Excelsior Scholarship raised during last month’s joint legislative budget hearing on higher education. Deborah Glick, a Manhattan Democrat who chairs the Assembly higher education committee, said the committee intends to put forward its own proposal, one that addresses all aspects of the higher education budget and the way it impacts CUNY and SUNY schools.

“My feeling is we could perhaps utilize those resources in a way that would help SUNY and CUNY, if the goal is completion,” Glick said, in an interview, of state money that would go toward tuition-free college. “We want to look more broadly at how we can use the same amount of resources to assist a larger number of students to finish their degrees and to do so with little or no debt.”

Other criticisms, which have been raised by higher education committees in both chambers, concerned insufficient state funds going to the schools’ operating budgets, a proposed restriction on TAP funding for private colleges that increase their tuition more than $500, and a “punitive” tithing on money raised by CUNY foundations for tuition assistance.

The Skoufis-led proposal drew praise from advocates. "Fortunately, this plan recognizes the majority of students take more than four years to graduate and that most middle income families still need support beyond tuition relief,” said Kevin Stump, Northeast Director of Young Invincibles, in a statement. “However, while these proposed improvements are a big step forward, the state will still need to address the inadequacies of the Tuition Assistance Program."

In January, the Independent Democratic Conference, which is in a power-sharing coalition with Senate Republicans, released its agenda, which includes an expansion of the TAP. The IDC is at times able to sway the Senate GOP majority into adopting positions that may be more favorable to Democrats. The Assembly Minority also supports TAP expansion.

Prior to a February 15 deadline, Heastie, a Bronx Democrat, received hundreds of letters from legislators recommending measures to be included in the chamber’s one-house budget proposal, which will be discussed by the Assembly over the next two weeks.

Of the Assembly members’ tuition proposal, Michael Whyland, a spokesperson for the speaker, said, “We are discussing the issue with our members.”

When reached for comment, the governor's office stood by the Excelsior proposal, but did not indicate whether Cuomo would be amenable to the suggested changes. "Our goal is to provide as many New Yorkers as possible -- regardless of race or religion; gender or orientation; documentation or ability; Zip code or lineage -- the opportunity to go to college tuition free, and that goal is met with the Excelsior Scholarship program," said Cuomo's spokesperson Dani Lever via email.

A new state budget is due by April 1, which is the start of the next fiscal year. Cuomo is likely to insist that some version of his tuition-free program is in the final spending plan for the state’s 2017-2018 fiscal year.

The story has been updated to include a comment from Cuomo's office.