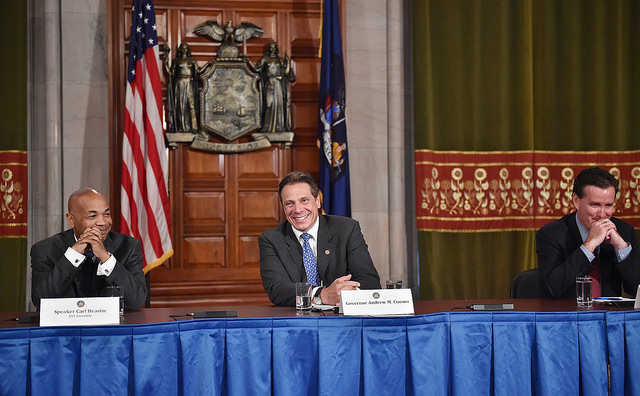 It’s the last week of March, which means the final stretch of New York State budget negotiations, and all are watching the “three men in a room,” an adage that has come to symbolize Albany’s opaque government processes and concentration of power.

Each March, for as long as anyone can remember, the governor, the speaker of the Assembly and the majority leader of the Senate hold frequent, clandestine meetings to hammer out important policy decisions and decide the fate of billions of dollars in state funding. A state budget is due by the April 1 start of the new state fiscal year. For many years, the Assembly has been controlled by Democrats, largely from New York City, while the Senate has been dominated by Republicans, mostly from upstate and Long Island, though the margin in the Senate has been quite slim for several years and Democrats held control briefly.

In 2015, Governor Andrew Cuomo, a second-term Democrat, changed the paradigm slightly to allow a fourth man in the room: Senator Jeff Klein, the leader of the eight-member breakaway group known as the Independent Democratic Conference, which has a ruling coalition with the Senate GOP. The move was decried as unfair by both minority leaders, those of the Senate’s mainline Democrats and the Assembly Republicans.

Whether three or four, the depiction of an exclusive club of legislative leaders and the governor alone in “the room,” mapping out the state’s interests behind closed doors, is not entirely accurate. Often in the room are senior staffers -- including budget directors and chiefs of staff -- who are intensely involved in negotiation and planning, while outside voices -- interest groups, lobbyists, rank-and-file legislators, think tanks, and others -- also wield some, usually small degree of influence over the participants and their decisions. It is typically true that the legislative leaders in “the room” are there with some instruction from their conferences about top priorities, items they are willing to trade for others, non-starters, and degrees to which they are will to accept partial victories.

Legislative leaders will often run from the negotiating room back to their conferences to discuss some details and get a sense of whether their minions are willing to go along with the latest deals on the table.

But for the vast majority of the 150 members of the Assembly and 63 members of the Senate, who serve on largely powerless committees, subcommittees, legislative commissions, and task forces, the doors to the room are closed, and the opportunity to influence final details of what is in and what is out of the state’s most important annual document is minimal.

Also out of the loop is the public. During the final week of budget negotiations at the Capitol, the statehouse press corps can be spotted diligently waiting outside of closed-door meetings, hoping to garner nuggets of information about the status of major issues like “Raise the Age,” an upstate expansion of ride-hailing apps, water infrastructure funding, education aid, and other contours of the $150 billion spending plan. When legislative leaders -- Assembly Speaker Carl Heastie, Senate Majority Leader John Flanagan, IDC Leader Klein -- do emerge from the governor’s office or various conference rooms, their comments are usually sparse and cryptic.

“I would say progress has been made on a lot of these issues,” Heastie told reporters on Tuesday. “But when all these things are interconnected for an issue that’s largely important to either us, the Senate, or the governor, that’s not been dealt with, there’s no deal.”

Following the convictions of former Assembly Speaker Sheldon Silver and Senate Majority Leader Dean Skelos in 2015, Cuomo and the new legislative leaders have even become more evasive of the press, holding negotiation sessions and leadership meetings at the Governor's Mansion.

On Monday, Cuomo noted that, unlike his predecessors, he has made point to involve Senate and Assembly committee members on high stakes policy issues like “Raise the Age,” which would increase the age that a person may be charged like an adult in criminal court, and has emerged as a major sticking point in this year’s negotiations.

"What I do -- which is a little different than past governors -- is on a truly complex issue like Raise the Age, like marriage equality, like gun safety, I actually bring in the senators and assemblymen who are the heads of those committees and work through the language myself,” Cuomo said Monday during an interview on NY1.

While this may be true for some high-profile issues, negotiations are almost exclusively among Cuomo and the legislative leaders when it comes to the rest of the policy and funding that is decided.

The system has shifted in other ways under Cuomo, who came to office in 2011 promising to restore function to state government and has delivered six consecutive on-time budgets, a point of pride for the governor that he regularly boasts about and has been given credit for. However, this usually means that the budget is passed late on March 31, sometimes spilling into April 1, with deals coming together in the final hours and almost no time for public review. Rank-and-file lawmakers usually only have a few hours to review complex budget documents before voting them through.

The deadline and Cuomo’s fixation on meeting it, along with the nature of negotiations among governing factions, have led the governor to issue a “message of necessity,” a motion to waive the aging period for bills required by the state constitution.

While the law calls for a three-day waiting period between printing of a bill and the day it is voted on, so that the public may review it, Cuomo, like previous governors, typically issues a "message of necessity" to bypass the requirement and speed the process along. It is a practice that has been criticized by good government groups and some legislators, who say timeliness should not be prioritized over transparency. Rather, these exceptions should be used sparingly, and for real emergencies like natural disasters.

“The ‘message of necessity’ in the passing of the state budget has become as predictable as snow is in January,” said Dick Dadey, executive director of government reform organization Citizens Union. “And it’s unfortunate, because that power should only be used in extreme circumstances. It has deprived the public the time to review and scrutinize the state budget before it has passed.”

Heastie and Flanagan, both relatively new to their leadership positions, appear more willing to involve rank-and-file lawmakers in budget talks than their predecessors. For example, Heastie sends frequent updates to his conference members on his interactions with Cuomo and Flanagan, sometimes hourly, according to Assemblymember Nily Rozic of Queens.

Calling the situation a “vast improvement” from the way the budget worked when she was first elected to the seat in 2012 and Silver was speaker, Rozic said that as a rank-and-file member of the Assembly now, “You certainly have opportunities to make your opinion known and to pick a few issues that you care about and to advocate for them in the budget process.”

On the Senate side, a spokesperson for Flanagan said the majority leader frequently seeks the input of his conference and brings issues back to its members for debate. "We are a member driven conference," said Scott Reif, in a statement to Gotham Gazette. "The legislative leaders and the Governor don't decide a budget on their own. Our entire Senate Republican Conference is working together every minute of every day to put together the best possible budget we can for hardworking. middle-class taxpayers and their families."

While legislators may feel more involved in final negotiations than in the past, messages to the public as the state budget deadline nears are often inconsistent or muddled by contradictory reports. On Monday, Flanagan, Heastie, and Klein expressed confidence that the budget would be delivered on-time, while Cuomo floated the idea of an “extender budget,” which would temporarily continue last year’s budget in order to account for uncertainties on the federal level.

On Tuesday afternoon, Assembly Democrats were told in a closed-door meeting that there would be no temporary budget extender, though Heastie, in an earlier interview said he was open to the budget being adopted in phases, The Buffalo News reported.

Members of the minority conferences, for their part, say they are privy to fewer details of budget talks and that they often learn the details of the budget bills when it is time to vote on them. According to Assembly Minority Leader Brian Kolb, an upstate Republican, letters addressed to Cuomo and Heastie go unanswered so he must “get creative” in order to represent the interests of his conference on the budget.

“The avenues we employ is social media, interviews like I’m doing with you, certainly we put out any number of press statements and policy statements,” said Kolb, whose conference is about half the size of the majority. “I think it should be that way, but we are dealing with facts and reality, so we have to be creative at figuring out ways to articulate our views.”

For Senate Minority Leader Andrea Stewart-Cousins, a Westchester Democrat whose chamber is controlled by Republicans by a razor thin margin and whose conference has long championed issues like Raise the Age, the stakes are higher. Stewart-Cousins has raised concerns that education aid and Raise The Age are being "watered-down," while ethics reforms and the DREAM Act are “being forgotten.”

“We obviously send written communication to our colleagues, I am in constant contact with Speak Heastie, I talk with the governor. People understand that we are invested in making sure that the right policy is in the budget,” said Stewart-Cousins in an interview with Gotham Gazette.

The leaders of both minority conferences say they believe they should be in the negotiating room, helping to formulate the budget and major policy deals. Spokespeople for Heastie and Cuomo did not return requests for comment on the transparency of the budget negotiation process.

Last year, a campaign to let Stewart-Cousins participate in budget negotiations -- which would earn her the distinction of being the first woman “in the room” -- went nowhere. “Changing these types of institutions is very, very difficult,” she said Tuesday, about three-and-a-half days before the budget was due.

Note: The article has been updated to include comment from a Senate GOP spokesperson.