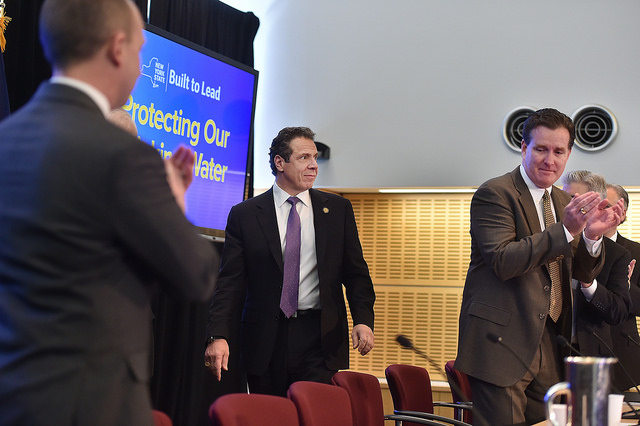 After the official deadline was missed and budget talks reached a weekend impasse, both houses of the New York State Legislature passed a set of bills Monday to extend the current budget, with tweaks, until May 31 in order to avoid a government shutdown.

When it became apparent that they would not have a deal in place by the April 1 deadline, Governor Andrew Cuomo, who prides himself on on-time budgets, said he was allowing a weekend "grace period" to negotiate a consensus and pass a $150 billion spending plan. But several contentious issues led to a stalemate and a crisis point. Lawmakers could not agree to the contours of criminal justice reform, K-12 education funding, and affordable housing policy, leaving the rest of the budget on hold.

Late Sunday night, the governor announced his intention to send the Legislature a budget "extender" and said in a statement that the majority leaders in the Senate and Assembly would pass it, which is what happened Monday at the Capitol.

With an interruption in state operations or payroll at risk, lawmakers decided to pass what Cuomo outlined, though many held their noses while doing so, and some voted against the temporary spending plan. Legislative leaders, meanwhile, indicated they were continuing to negotiate the larger budget plan for the new fiscal year. The Legislature is in session this week in Albany before a two-week break.

Even with the temporary extender, there will be consequences for legislators, according to a spokesperson for Comptroller Thomas DiNapoli. For lawmakers to get paid, the law requires that they take all actions necessary for the ongoing operations of state government and local assistance for the entire 2017-18 fiscal year. In other words, state law prevents legislators from being paid without a full spending plan in place.

Though members of the Senate’s Independent Democratic Conference -- an eight member breakaway group of Democrats that forms a ruling coalition with majority Republicans -- and mainline Democrats had vowed not to pass a budget without raising the age of criminal responsibility from 16 to 18 years old, the extender bills passed the chamber by a 46-15 vote.

“I’m not shutting the government down,” Senate Majority Leader John Flanagan said from the Senate floor during debate ahead of the vote. Senators indicated it was essential to keep the government running and to ensure that state employees would be paid on schedule.

Senators who voted against the extender noted that it failed to address affordable housing programs, including a new 421-a program, critical education and health funding, and criminal justice reforms, particularly “raise the age.”

“Children do not belong in prison; children should be treated like children. Thus, I cannot vote for this budget extender,” said Senator Jesse Hamilton, an IDC member from Brooklyn, in a statement.

On the Senate floor, Flanagan pushed back on the suggestion that the minority conferences were not represented in the extender budget.

“I don’t subscribe to the notion that minority members have been left out, because I read the tweets, I read the blogs, I read the media accounts, I see what people say. I know where people’s priorities are,” said Flanagan.

The measure did not pass as smoothly on the Assembly floor.

Exhausted Assembly members on both sides of the aisle lashed out at the governor for his lack of communication with rank-and-file lawmakers, especially those in the minority Republican conference, the absence of criminal justice reform or a satisfactory 421-a plan, and for citing federal uncertainty as one of the reasons for the gridlock.

Assemblymember Diane Richardson, a Brooklyn Democrat, said “we will not be duped” by the governor’s tricks, while Assemblymember Steven McLaughlin, a Republican representing the Capital Region, accused Cuomo of “hiding like a coward” and encouraged his peers to push back on the “thug nonsense.”

While the governor has described the budget bills as a bare bones extender that would just continue last year’s financial plan so that the government could continue to function, controversial details were worked into the more than 1,700 pages.

The temporary budget includes billions of dollars in funds for the governor’s regional economic development programs, New York City infrastructure projects, and next phase of the Buffalo Billion. It also includes elements of the Assembly and Senate one-house budget resolutions, like the addition of bottled human breast milk as covered by Medicaid, which Assembly Democrats proposed, and $2.5 billion for upstate drinking water infrastructure, something Senate Republicans have wanted, notes Empire Center, a fiscally conservative think tank.

Two months is too long a period to keep New York residents in the dark about what policies and economic measures will make it into the budget, good government advocates said.

"New Yorkers deserve to know why their elected representatives have given themselves an extension on their homework. We need open leaders meetings where people can understand the negotiation process that's holding up their $150 billion budget,” said Common Cause NY executive director Susan Lerner, in a statement. “We need a public process."

The budget extenders, like full budgets before them, were passed with “messages of necessity” from the governor, which waive the otherwise-required three-day aging period for bills before they can be voted on.

Citizens Budget Commission, a nonpartisan budget watchdog, said in a statement that “this emergency legislation is preferable to a government shutdown, but creates uncertainties for school districts and local governments. Achieving a fiscally sound budget is more important than an "on time" budget, but the pressing outstanding issues could and should have been resolved as part of a more effective and accountable budget process.” CBC also called for a sound, full budget plan to be agreed on “promptly.”

In an evening statement, Gov. Cuomo's office hailed the passage of the budget extender, "which funds all government operations through May 31 and advances key priority infrastructure, economic development, and environmental projects across New York." Cuomo's office highlighted the investment in clean water, cost controls on prescription drugs, and that the budget "increases direct care professional salaries 6.5 percent over the next two years."

"Over the next two months, the state expects to spend $24.6 billion, which includes the general fund, aid to localities and school districts, special revenue, capital projects, and debts service," the statement from Cuomo's office says. "The Extender also authorizes $16.4 billion in new capital appropriations to advance critical economic development and infrastructure projects."

Meanwhile, Mayor Bill de Blasio indicated Monday that he’s frustrated with how things played out in Albany. “The impact on the city of not having a state budget is more uncertainty,” de Blasio said on NY1’s Road to City Hall Monday evening. De Blasio also pledged on two different occasions Monday to continue to push for his “mansion tax,” which would provide the city with additional revenue to fund affordable housing for seniors but has been called a non-starter by both Senate Republicans and Gov. Cuomo.

***
by Ben Max and Rachel Silberstein