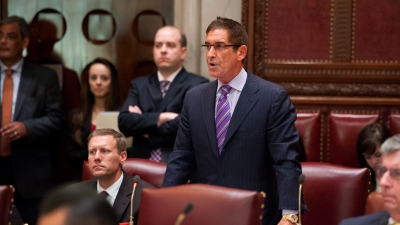 Reports that state senators have been receiving stipends for committee chair positions that they do not actually hold has drawn scrutiny to the Legislature’s stipend system and raised questions about the legality of the ways in which Senate leadership has arranged such payouts, often called lulus. Those questions have led to others, specifically whose job it is to investigate the potential wrongdoing involved and whether any legal or ethics enforcement entities will take action.

Four Republican senators and three members of the Independent Democratic Conference (IDC), an eight-person breakaway group of Democrats that aligns with the Senate GOP -- all seen as loyalists to Senate Majority Leader John Flanagan -- were recipients of bonus checks ranging from $12,500 to $18,000 a year, despite holding roles as vice chairs, a position that does not include a stipend. The New York Times first reported the potentially fraudulent filings last week, and reported Thursday evening that an unnamed law enforcement entity is now investigating the falsified paperwork. The Daily News then reported that Attorney General Eric Schneiderman's office and the office of the U.S. Attorney for the Eastern District of New York are investigating.

Flanagan, who signed off on payroll requests sent to the New York State Comptroller’s Office, which appear to misidentify the seven vice chairs as committee chairs, has defended the practice. “I believe everything we’ve done in the past and right now is in full accordance not only with the constitution but the legislative law,” Flanagan, a Republican from Long Island, told reporters Monday afternoon at the state Capitol.

Over the weekend, the conference’s attorney, David Lewis, released a memo arguing that there was no impropriety, and noting that the practice started with IDC Senator David Valesky, of Syracuse, was awarded a lulu for a vice chair by former Majority Leader Dean Skelos several years ago.

Critics of the IDC’s coalition with the GOP say that the stipend practice effectively rewards the rogue Democrats for empowering the majority conference. The Daily News reports that IDC Leader Senator Jeff Klein also received a significant pay hike through an increased stipend this year after Flanagan formally named him the chamber’s vice president pro tempore.

Whether the payments are legal is unclear. The distribution of lulus is codified in state law, but it is not specified that an unclaimed stipend can be diverted from a chair to someone who does not hold the position. Furthermore, deliberately submitting false payroll documents to the Comptroller could warrant criminal charges -- the Senate majority leader’s office listed vice chairs as chairs on payroll documents.

But as a blame game ensues at the Capitol, and GOP senators hide out in their chamber to avoid the press gaggle, questions abound over which entity would be authorized to investigate this practice of falsifying information on payroll forms.

Without specifying who might have jurisdiction, Senate Minority Leader Andrea Stewart-Cousins, a Westchester Democrat, has called for “someone in authority” to look into “the obvious violations of state law.

“It seems every day troubling new questions arise and new details are learned about the apparent abuse of the Senate stipend system,” she said. The counsel for the Senate Democratic Conference issued a memo countering the arguments laid out by the Senate GOP’s counsel and pointing to impropriety.

Governor Andrew Cuomo, a second-term Democrat, took reporters’ questions after an unrelated news conference in New York City Thursday, and pointed to the comptroller’s office, saying it must determine whether or not the practice is legal. “If it was not legal, the comptroller should call up and say ‘whoops I made a mistake, I need the money back,’” Cuomo said. “The call is the comptroller’s.”

In response, a spokesperson for DiNapoli’s office said in a statement, “The Comptroller’s office is not a court of law. This issue needs to be decided by the Senate itself or the legal system.”

Previously, DiNapoli’s office had issued a statement saying that the Senate is expected to comply with state law and house practices when filling stipend requests. "When our office receives a payroll request that has been certified by the Senate, or any state entity, we make the payment. At this time, we have no basis to take back this money," said Jennifer Freeman, a spokesperson for the Office of the State Comptroller.

While Cuomo has enjoyed a close working relationship with Flanagan and Klein, he has feuded with DiNapoli, including earlier this week over a new report from the comptroller scrutinizing missed reports from one of the governor’s controversial economic development programs.

Beyond the Comptroller’s Office, other oversight authorities that may have jurisdiction to pursue an investigation include the Attorney General’s Office, the Albany District Attorney‘s Office, and the U.S. Attorney for the Southern District of New York (USASD). All three offices declined to comment on the stipend situation when Gotham Gazette reached out.

Attorney General Eric Schneiderman’s office is not authorized to pursue an investigation without a referral from the comptroller, the governor’s office, or a number of other government authorities. The situation also could also fall under the jurisdiction of the USASD, a position previously held by Preet Bharara, who became known for aggressively pursuing cases of public corruption, but was fired suddenly by President Donald Trump in March.

Finally, there is the Joint Committee of Public Ethics (JCOPE). While the independent ethics board cannot pursue criminal charges, it can investigate potential violations of the state's ethics law within the Legislature and issue a report, which is then referred to the Legislative Ethics Commission, a body comprised of four-legislative members and five non-legislative members. If the Legislative Ethics Commission accepts the findings of the report, it is authorized to mete out an appropriate penalty. The Senate and Assembly also have in-house ethics committees, which rarely meet. A spokesperson for JCOPE declined to comment on the stipend matter.

Which law enforcement entity is looking into the issue was not clear in the initial Thursday evening report by the New York Times.

Cuomo also pointed to the structure in which lawmakers are paid, which he says is inherently flawed. The governor has called for a pay increase for legislators and a strict cap on or elimination of what income they can earn in other jobs -- legislators are technically part-time, and they have not received a salary increase since 1999. Cuomo did not address eliminating stipends.

“The fundamental problem is the way we pay legislators and the conflicts of interest that are intrinsic in the system,” he said. “The stipend is pennies compared from the salary structure which is premised on the fact that they are part-time, which is premised on a fallacy -- because they are full-time.”

While lawmakers collect $79,500 annual base pay, legislative stipends for committee leadership roles ranging from $9,000 to $41,500 are fairly common in both houses. An Empire Center report from 2016 notes that all 63 senators are eligible for stipends -- though some decline the cash -- and more that half of Assembly members receive supplementary payments through their secondary roles in the Legislature. Lawmakers are also permitted to hold outside jobs in addition to their legislative roles.

Calling for a formal investigation is the government watchdog group Common Cause/NY. “Today’s New York Times report that the Senate filed fraudulent documents to secure ‘lulus’ for members of the Independent Democratic Conference represents an egregious misuse of public monies, and potentially a more serious legal violation, which must be investigated by law enforcement,” Common Cause/NY said in a statement last week. “This is not a clerical error to be blamed on staff, or punted to the comptroller.”

The organization also defended the comptroller’s office saying, “It is entirely appropriate for the Comptroller to trust and rely on the information as certified to him by the designating authority, in this case the Senate.”

Meanwhile, members of the IDC have continued to dismiss the lulu scandal as business as usual.

“Well, certainly it seems as if everyone is obsessed with the 'Lulu Land' here in Albany. But quite frankly, it is a story about nothing," said Senator Diane Savino, an IDC member from Staten Island and one of the seven getting the extra stipends, on NY1 Monday. "Legislative stipends have been in existence for decades here in Albany. It's certainly not something new."

In addition to Valesky and Savino, IDC Senator Jose Peralta, a Democrat from Queens; and Republican Senators Thomas O’Mara, of the Finger Lakes region; Patrick Gallivan, of Buffalo; and Patty Ritchie, of Elmira, have also received payments for their roles on committees they do not chair.

Senator Pamela Helming, a first-term Republican from Central New York, was also misidentified in the Senate payroll documents as a chair, but her office told reporters she has not cashed the checks and intends to return them.

Note: this article has been updated to reflect that the New York Times reported Thursday evening that an unnamed law enforcement entity is investigating the Senate stipend matter.