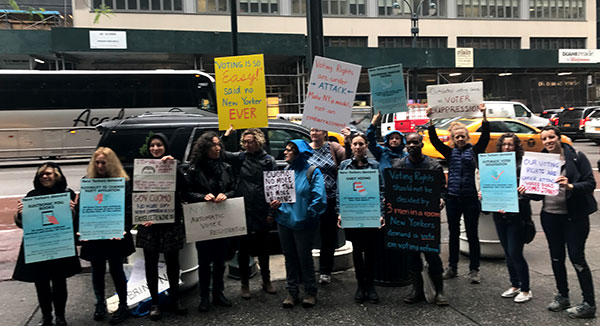 The 30 or so demonstrators highlighted five key points they would like the governor to address in the petition they presented, which they said had 1,500 signatures on it. The state has about two weeks to pass any new laws before the end of the legislative session in Albany and Brooklyn Voters, along with a variety of others, is looking to the governor to take the lead on electoral reform.

The petition demands include early voting, automatic voter registration, providing electronic poll books, allowing for changes to one’s party registration closer to elections, and restoring parolee voting rights. Activists hope to increase access to the ballot and voter participation, which is notoriously low in New York, at least in part due to the state’s roundly-acknowledged antiquated voting laws.

“We have 1,500 signatures on this petition saying that this is something New Yorkers want,” said Nicole Hunt, a Brooklyn Voters Alliance organizer. The group delivered the petition to a staffer from the governor’s office in the lobby of 633 3rd Avenue at approximately 1:15 p.m.

The effort came the same day that Cuomo was participating in a political rally at the Javits Center, launching a push to flip the U.S. House of Representatives to Democrats through the 2018 elections. Meanwhile, the Legislature was also in session in Albany, where there are just nine more days of session after Tuesday.

“While Gov. Cuomo attends a rally on this same day to support electing more Democrats to Congress, he neglects voting reforms that would protect and benefit voters in his own state,” a Brooklyn Voters Alliance Action press release promoting the event read. “New Yorkers demand that Gov Cuomo provides more than excuses and empty rhetoric on voting reform.”

“We have been trying to get voting reform passed this legislative session,” Hunt said. “Cuomo talked about getting it into the budget and then kicked the can down the road. We think that the governor has more power to change this than he is letting on.”

Hunt also added that the group tried to meet with a Cuomo representative, but have “gotten nowhere,” and believes the governor is insufficiently attentive to his constituents.

In January, Cuomo outlined an extensive voting and election reform agenda as part of his 2017 State of the State policy platform. None of the reforms made it into the budget that was passed in April, and there has been almost no indication that electoral reform will move in the legislative session since. The Democratically-controlled Assembly has passed a slew of electoral reforms, but the Republican-controlled Senate has not. Cuomo has been virtually silent publicly on electoral reform since January, only addressing it when asked by reporters.

The Brooklyn Voters Alliance Action leadership also voiced skepticism of the Independent Democratic Conference (IDC), a faction of elected Democrats in the state Senate that allies with Republicans in a ruling coalition. BVAA blames the IDC, along Cuomo’s lack of leadership, for stifling efforts to amend voting laws.

“He’s [Governor Cuomo] at a rally today with Nancy Pelosi to push turning Congress blue, but he can’t even keep his own state Senate blue!” Hunt said. Even without the IDC, Republicans hold a one-seat majority in the 63-seat Senate with 31 elected Republicans and Senator Simcha Felder, a Brooklyn Democrat who caucuses with the GOP.

As Gotham Gazette reported Monday, there are currently two bills stuck in Senate committee that would address the implementation of electronic poll books and allow voters an additional seven days to cast their ballots through early voting. Some advocates believe e-poll books will be passed through both chambers, but that little else will get through the Senate.

Cuomo has taken the position recently that there is not enough political will in Albany to tackle voting reform (or government ethics reforms). Especially without aggressive advocacy from Cuomo, it appears that there is little hope for major electoral reforms, like early voting or same-day registration, this year.

In response to an inquiry from Gotham Gazette about the petition presented Monday by the Brooklyn Voters Alliance and whether the governor plans to take any public action on electoral reform before the end of the session, a spokesperson sent the same statement provided to Gotham Gazette previously:

“Since taking office, the Governor has repeatedly proposed voting reforms that have been opposed by the legislature and stalled during the budget process. We will continue to push to modernize our election system and we will work with all parties who join in those efforts.”

But those seeking the changes are not satisfied with how Cuomo has handled the issue, feeling as though he has put voting laws on the backburner. As a result, there are rallies planned to pressure Albany in the coming weeks, including by a large coalition known as Easy Elections NY, which includes a variety of government reform groups. “I would say if people are concerned about the state of our democracy, removing the barriers to participating in our democracy should be our number one priority,” said Amanda Ritchie, an activist with the Brooklyn Voters campaign. “Voter suppression is real and we need reform this year. We are not waiting any longer.”