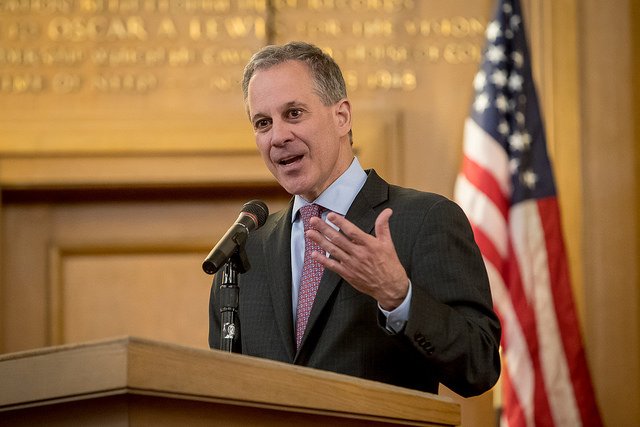 New York Attorney General Eric Schneiderman has quickly become one of President Donald Trump’s leading opponents, using the levers of his office to litigate against Trump’s policies, and has put New York at the forefront of efforts to resist the new Republican administration’s agenda.

Speaking at a Tuesday breakfast event hosted by the Association For A Better New York (ABNY), Schneiderman, a second-term Democrat, discussed his role in the Trump era, which has made his focus much more on Washington, D.C. than Albany, New York, the state capital where Schneiderman has worked as a state senator and sought reforms to the state’s election and government ethics laws.

The focus of the ABNY event Tuesday morning was Schneiderman’s approach to Trump. The attorney general emphasized New York’s fundamental principle of openness and reiterated his pledge to fight President Trump’s travel ban on people from six Muslim-majority countries. “New York values of mutual respect, pluralism, and common sense are more important than ever,” he said to a room of around 250 people at the Sheraton Hotel in Midtown Manhattan. “As long as I am your Attorney General, I promise to do everything I can to stand up for those values and defend all the people I represent  in the challenges we face together.”

He also described his approach toward the legislation that seeks to repeal the Affordable Care Act, which may soon receive a vote in the U.S. Senate. “If the version of the health care bill proposed last week ever becomes law, I’ve promised to go to court to challenge it – and protect New Yorkers from these wrongheaded and unconstitutional provisions,” he said.

In a lighthearted moment, Schneiderman described the experience of quarreling with Trump over the years, even before Trump ran for President. In 2013, Schneiderman filed suit against the real estate mogul for his fraudulent for-profit college Trump University. The president settled in 2016 for $25 million.

Schneiderman noted he has learned to ignore Twitter, a favored Trump medium that the president has long-used to attack Schneiderman and others, and how Trump consistently pulls out all the stops against people when he feels threatened by them. Schneiderman read aloud a few insulting tweets that Trump has sent about him over the years. The attorney general also recalled when the New York Observer, owned by Trump’s son-in-law Jared Kushner, published a cover depicting Schneiderman as “Clockwork Eric,” likening him to the 1971 movie “A Clockwork Orange” character Alex DeLarge, who is a violent rapist. The paper published an accompanying feature on Schneiderman that accused him of “political opportunism,” “vindictiveness,” and cast doubt on his investigation into Trump.

When he did mention more local state affairs, Schneiderman cited passage of legislation to end the so-called gun show loophole and development of a drug tracking system, along with changing his office’s mentality. “Consistent with my goal of keeping New York competitive, we have shifted the culture of our office by making it clear that lawyers on my team don’t just get credit for catching bad guys; they also get credit for helping good guys,” said Schneiderman, who succeeded Governor Andrew Cuomo as attorney general.

State government was a distant second to national matters as they relate to New York, in keeping with the event’s intended purpose. The media advisory announcing the event stated Schneiderman was expected to “discuss his work fighting Trump Administration policies that he believes threaten New Yorkers and the rule of law. Attorney General Schneiderman will detail his office’s efforts on both fronts and articulate his priorities for the future in the fight to defend New York.”

While it made sense for Schneiderman to omit state government ethics and voting reform from his remarks, the attorney general was holding his first public speaking event since the end of the scheduled legislative session in Albany, which included none of the reforms Schneiderman has proposed. Tuesday’s event was representative of a shift in focus by Schneiderman away from state reforms and toward taking on federal government policies with the aim of fighting for New Yorkers against a new presidential administration and Republican-controlled Congress.

A spokesperson for Attorney General Schneiderman disputed this observation. “He can walk and chew gum at the same time, and that’s exactly what he’s been doing,” wrote Amy Spitalnick, the Schneiderman spokesperson, in an email to Gotham Gazette. But, while Schneiderman does oversee a large and busy office, the attorney general has been quiet regarding state reforms in recent months as major decisions are made in the state capital. Schneiderman's office explained that representatives from the AG's office have met with legislative leaders, relevant committee chairs, and advocates about Schneiderman's proposals.

A review of Schneiderman’s May and June press releases show that as the legislative year in Albany headed toward underwhelmingly conclusion, the attorney general spoke out against President Trump’s withdrawal from the Paris Accords; filed suit against Trump regarding energy efficiency standards; challenged the EPA on toxic pesticides; criticized Secretary of Education Betsy Devos over discontinuing student loan forgiveness policies; announced opposition to potential regulatory rollback in Senate legislation; voiced concern over infringement upon New Yorker’s contraceptive rights by Trump administration policies; and reaffirmed New York’s commitment to protecting so-called sanctuary city statuses; along with other pushbacks against policies originating in Washington.

Schneiderman’s main public efforts have been to, as he sees it, protect New Yorkers from the new president’s policies, many of which he believes threaten New Yorkers rights and needed services. Schneiderman was the subject of profiles in major outlets such as Politico and New York Magazine, both focused on his efforts against Trump. Meanwhile, Schneiderman hired Revolution Messaging, Senator Bernie Sanders’ digital consulting group in April , to work on his political team -- the AG is expected to seek a third term in 2018, but is also regarded as a certain gubernatorial candidate when Cuomo is no longer in the picture.

But the attorney general’s office insists that Schneiderman has been attentive to Albany-related efforts. “Anyone who follows the AG’s work knows he’s been very engaged in the fight for voting and ethics reform, including proposing his own legislative packages on both issues,” the Spitalnick wrote. “That’s in addition to his push to strengthen tenant protections, protect cost-free access to birth control, and more.”

While he has been quiet on both recently, Schneiderman has pushed election and government ethics reforms. In February, he introduced the New York Votes Act, a bill that would institute automatic and same-day voting registration along with early voting. On ethics reform for the scandal-plagued state government, in May 2015 Schneiderman introduced legislation that would give investigatory powers to the attorney general to prosecute corruption by officeholders, ban lawmakers from receiving outside income, and make campaign donation laws more restrictive. None of Schneiderman’s proposals on these two fronts have made it into law, opposed at various turns by the powers that be in Albany, including Governor Andrew Cuomo, the Democratic majority in the Assembly, and the Republican-led majority in the Senate.

Asked for recent examples of how Schneiderman has pushed his electoral and ethics proposals, or for any plans to get them moving, the AG’s office pointed to examples in the more distant past. Schneiderman does not appear to have held a public event, issued a press release, or written an op-ed on either voting or ethics reform since February, when he released his electoral reform package. The state budget was passed in early April and the scheduled legislative session ended last week, both without any of these reforms.

Speaking with reporters following his Tuesday ABNY speech, the attorney general said the legislative session ending without ethics reform was a missed opportunity. “I think that it is essential that the state government show an ability to, and a willingness to, reform,” he said in response to a question from Gotham Gazette. “Otherwise, we're just going to have more scandals and a further erosion of public confidence.”

“The willingness to get it done is there and I think there is an unfortunate tendency to cling to the status quo,” he added, though he did not cite evidence of the existence of any “willingness” and his spokesperson did not explain what he meant when asked in a follow-up email.

Corruption has plagued New York’s capital for years, with legislator after legislator removed from office because of ethical scandal. Recently, former State Assembly Speaker Sheldon Silver and former Senate Majority Leader Dean Skelos were convicted separately on public corruption charges. Not long after that, charges were announced against nine associates of and donors to Gov. Cuomo in a massive alleged bid-rigging scandal. In September 2016, Schneiderman’s office brought charges against two former Cuomo aides along with state official Alain Kaloyeros as part of that scandal. In March, Schneiderman’s office also charged state Senator Robert Ortt and former state Senator George Maziarz for embezzling funds, though the charges against Ortt were dismissed by a judge on Tuesday.

Despite months of inaction on election and ethics reforms in Albany, Schneiderman said Tuesday he is hopeful. “I do really believe that we are at a point where the public is demanding reform and there are enough legislators who get the need and are willing to get a step towards it,” he said in the gaggle. “So I think that's something which should be coming.”