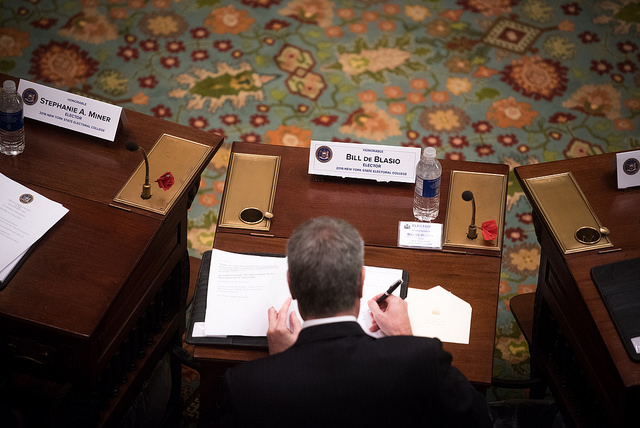 To prevent the lapse of mayoral control over New York City schools, Governor Andrew Cuomo on Tuesday called an “extraordinary session” of the state Legislature to convene on Wednesday at 1p.m. in Albany. Often referred to as a “special session,” details of how the day will unfold -- especially what legislation will pass -- are still unclear.

Currently, the session has been called for just one day, with the only named purpose the extension of authority granted to the New York City Mayor, currently Bill de Blasio, to run the city schools. But, as of Tuesday evening, there is no specific bill on the table and Cuomo’s proclamation leaves the discussion open to “such other subjects” he “may recommend.”

The failure to reach a deal by the end of the week would lurch the educational system for 1.1 million city schoolchildren into uncertainty, and the process would commence to revert school governance back to the Board of Education and local school boards -- which, while in power, were frequently charged with inefficiency and corruption.

Like most educational experts, Governor Cuomo, Senate Majority Leader John Flanagan, and Assembly Speaker Carl Heastie have all expressed support for mayoral control and believe that the old school board system was worse. But, the GOP-controlled Senate want to tie an extension to an increase in the cap on charter schools in New York City. The Assembly wants a clean extender of mayoral control, but did tie it to other local extenders in the form of expiring tax rates that also have widespread support.

On Wednesday, the three men will meet again try to break the impasse over the issue, and perhaps negotiate other policies, while reporters try to glean some insight into the negotiations. After breaking last Wednesday night at the end of the scheduled legislative year without deals on mayoral control, local tax extenders, or several other high-profile items, legislators, some of them on vacation, are being called back to the capital to handle unfinished business.

A majority is needed in both houses for the session to commence, and it is the responsibility of the legislative leaders to compel their members to return to the Capitol, according to Cuomo’s office.

According to Albany lore, the executive can call in state troopers to force lawmakers back to the Capitol for a special session. This myth, cited by several legislative staffers, does not appear in the state constitution. Senate rules do require a quorum, or 60 percent of members to be present for any motions or resolutions, and empower those present to send the Sergeant at Arms to bring absent senators back from their districts if necessary. In post-session remarks this past Thursday, Cuomo did jokingly reference constituents using force to send their local legislators back to Albany to finish their business.

While special sessions are sometimes intended to tackle a single topic, The New York Times reported that the governor may be offering the Senate GOP approval of a bill to increase accidental disability pensions for firefighters, police officers, and other city employees in exchange for a sign-off on one year of mayoral control without charter school provisions attached. This has opened the door to lawmakers and interest groups who want to see other bills considered in renewed negotiations.

Also caught in the crossfire, is a standard two-year extension dozens of local and county taxes. If it lapses, counties could face a $1.8 billion collective hole in their budgets, according to the New York State Association of Counties. Like with mayoral control, virtually all the major stakeholders believe in an extension, but disagree on the details of a deal.

Now NYSAC is calling for the Legislature to tackle legislation that would permanently allow county governments to extend their sales tax rates every two years.

Senator Michael Gianaris, a Queens Democrat, wants the special session to include action on New York City’s rapidly deteriorating subway system, following a particularly dramatic derailment incident Tuesday morning, which left dozens of straphangers injured. Just before the end of the scheduled session Gianaris had put forth a new proposal for a temporary dedicated revenue stream to infuse cash into the MTA.

“With the state legislature likely to return to Albany soon to address outstanding issues, fixing the MTA should be a top priority. When they return, the Governor and members of the legislature should not leave the Capitol until a solution to the MTA crisis is enacted,” wrote Gianaris in a petition for lawmakers to consider his bill to establish a dedicated funding stream for emergency maintenance and repairs.

While only the governor sets the agenda for a special session, his power is limited.
Technically, the Legislature never gavels out of session. According to the state constitution, if the Assembly goes dark for four days consecutively, lawmakers cannot reconvene until the following calendar year.

So, for more than two decades, every third day, an Assembly member has entered the chamber, and triple-banged the gavel on the podium -- a ritual that keeps the Legislature endlessly in session. This practice is intended to prevent recess appointments by the Governor and also allows any new legislation to age the requisite three days before becoming law.

Since the legislative session never really ends, when a special session is called, the Legislature must return to Albany, but can immediately gavel out and go home. Its members can also stay and reconvene to consider legislation of their choosing.

The Legislature first turned over control of city schools to the Mayor in 2002.
Previously, they were governed a seven-member Board of Education and 32 elected community school boards. The Board of Education, which had two mayoral appointees and one each from the borough presidents, selected the chancellor. The mayor could also influence the school system through the city budget.

Authority to appoint superintendents in elementary and middle schools was stripped from the Board in 1996 due to evidence of corruption and patronage in some school districts. Since this shift test performance and graduation rates dramatically improved at city schools, reports The New York Times.

Without clear direction, the session can get expensive.
Compensation, per diem allowances and travel expenses for members can add up, not to mention the cost of additional legislative staff. There are 150 seats in the Assembly and 63 in the Senate. It’s not clear how many legislators will be back to Albany for Wednesday’s session.

Legislators are paid a per diem rate of $175, which is to cover hotel and food, plus they are compensated for travel expenses at 55 cents per mile, not including tolls. For a lawmaker from Buffalo, which is approximately 300 miles from Albany, the travel bill tallies up to around $150 each way, for example. There is also a partial per diem rate of $59 when lawmakers do not spend the night.

Note: This article has been updated to clarify how lawmakers are gathered back to the Capitol during a special session.