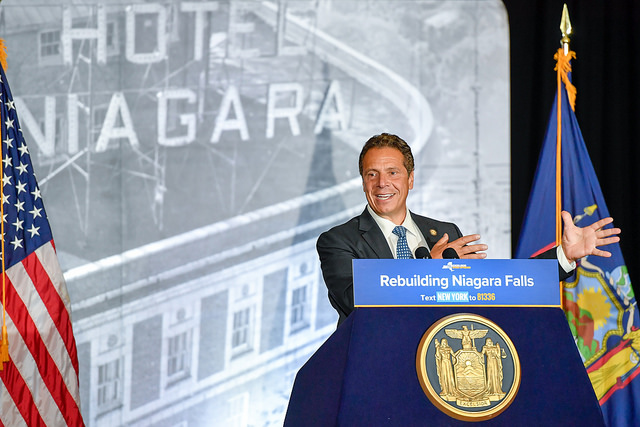 Governor Andrew Cuomo’s campaign finance filings show he’s sitting on a considerable war chest as he heads into the final year of his second term.

New York’s Democratic governor, up for re-election in Fall 2018, has $25.7 million in his campaign account, according to financial reports filed last week. And as he approaches the state election year, Cuomo’s fundraising momentum is strong. Between January and June, Cuomo raised $5.1 million in monetary and in-kind contributions and spent $1.35 million, according to the filings.

More than $500,000 of that campaign intake came from LLCs -- though Cuomo has said that he is in favor of ending the notorious LLC loophole, which allows those in elected office to accept virtually unlimited donations from corporations.

Cuomo returned more than $220,000 in contributions to various donors, some with problematic histories, or individuals with business before the state.

Several gifts, which are legal if they are related to normal operations, show up on Cuomo’s filings, including $212 on a gift from Tiffany’s & Co. A spokesperson for the state Democratic Party told The New York Post that it was a pen sent to Senator Kirsten Gillibrand for her birthday.

His campaign also made a $44.99 purchase at a Midtown Crocs store, apparently a gift for chef Mario Batali, one of the judges for Cuomo’s inaugural Taste NY Craft Beer Challenge this spring, The Daily News reported (Batali is known for sporting the iconic footwear in orange).

In addition, Cuomo has access to more than $1.3 million sitting in the New York State Democratic Committee’s primary and housekeeping accounts, which are controlled by the governor’s operatives, financial disclosure reports show. While fundraising in those accounts has been comparably slower -- the housekeeping account pulled in $1.6 million in contributions and the committee account $40,000 -- both entities will likely see more activity as the gubernatorial race heats up. Housekeeping accounts are limited in their function -- they may not spend on the election of a specific candidate, but can be used for party building activities.

This fundraising gives Cuomo a significant advantage over his potential challengers. No one has yet emerged to challenge Cuomo in the Democratic primary. The governor is surely hoping for a smoother showing than in 2014, when law professor Zephyr Teachout gave Cuomo a tough primary race playing on his vulnerabilities and energizing those to the governor’s left who were disillusioned with Cuomo’s centrism. With little institutional support or political experience, and minimal campaign cash, Teachout won a third of the primary vote.

The general election field is also unclear at this point, with several Republicans considering a gubernatorial campaign. Two suburban Republican county executives, Westchester’s Rob Astorino, who lost a gubernatorial challenge to Cuomo in 2014, and Dutchess County Executive Marc Molinaro, are able to fundraise through their local re-election committees ahead of a formal announcement.

Molinaro is not up for re-election until 2019 and his Molinaro for Dutchess campaign account has lost money this year, shrinking from $50,832 to $34,547. Astorino, who is being challenged by Democratic Senator George Latimer for the county executive post this fall, recently raised $1.1 million on top of the $2.5 million he already had and spent $400,000, bringing his total nest egg to $3.2 million.

Other Republicans who have hinted that they might attempt to unseat Cuomo include Harry Wilson, who performed fairly well during his run for state comptroller in 2010 and is independently wealthy, and two state senators, Majority Leader John Flanagan, of Long Island, and John DeFrancisco, of Syracuse.

The Republican State Committee has $264,434.92 stashed, and nearly $1 million in its housekeeping account. Some interesting donors to the housekeeping account since January include $500,000 from state party Chair Ed Cox’s brother Howard Cox, and $3,500 from Davidoff, Hutcher & Citron, which is co-owned by the brother of Queens Democratic Party Chair Joseph Crowley and employs Manhattan Democratic Party Chair Keith Wright.

Two other statewide incumbents, Comptroller Tom DiNapoli and Attorney General Eric Schneiderman, both Democrats, also have money in the bank as they each eye another term. Schneiderman has $7.6 million in the bank and DiNapoli’s campaign account has $1.7 million. No one has declared an intention to challenge either official, though that may chance by the next campaign finance filing deadline, in January.