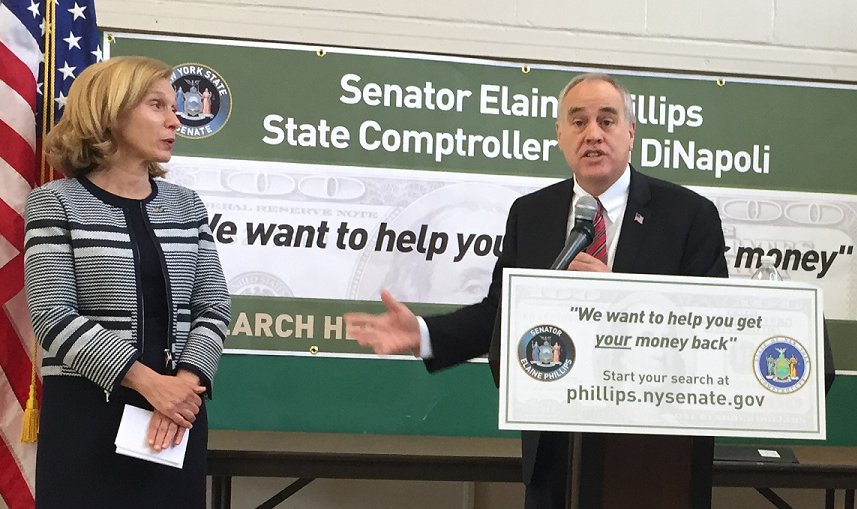 State Comptroller Tom DiNapoli is calmly ringing alarm bells about the New York economy and budget outlook. DiNapoli, the state’s chief fiscal officer, recently announced that overall tax collections for the first quarter of Fiscal Year 2018 -- April through July -- fell by $1.2 billion from the same period last year, a decrease of 6.1% in revenue.

Not only did tax revenues decrease by $1.2 billion from the prior year, but they were also $1.7 billion below a projection made by the Comptroller’s office in February, an indication that things are significantly worse than expected.

The findings were compiled in the comptroller’s monthly state cash report, issued in late July. In an accompanying statement, DiNapoli diagnosed a potential cause of the unanticipated shortfall in state revenues.

"We're three months into New York's fiscal year and personal income tax collections are falling short of what was expected," DiNapoli said. “Taxpayer anticipation of federal tax changes has contributed to the decline. Offsetting that, business tax collections are well over estimates.”

The comptroller, a few days after releasing the cash report, also released a larger fiscal analysis of the state’s enacted budget and other spending plans, including the capital program, which funds infrastructure projects. Already on unstable footing due to lower than expected revenues and questionable uses of budgetary windfalls, the situation is made worse by the looming cuts in federal aid by President Donald Trump and the Republican Congress, who have proposed deep cuts in areas integral to New York ranging from affordable housing to transportation and health care.

The comptroller’s fiscal report signals a potential crisis for the state in spite of what the DiNapoli refers to in his accompanying message as the nation’s “ninth year of economic expansion.” The larger analysis shows decreases in federal aid could have a large impact on the state’s ability to provide healthcare, for instance, with Medicaid funding at particular risk. Medicaid funding saw a significant increase in the new state budget, which was passed in early April after an agreement between Governor Andrew Cuomo and the two houses of the state Legislature.

The balance in the state’s General Fund, which is the state’s destination for non-earmarked revenue, is $7.7 billion, according to the report. According to DiNapoli, the figure “is substantially higher than the levels in the period during and immediately after the Great Recession, largely reflecting monetary settlements received in the past three years. But the State’s budgetary cushion is shrinking: the Enacted Budget Financial Plan projects that the General Fund balance will be one-third lower at the end of the current fiscal year than its recent peak two years previously.”

DiNapoli criticizes the apparent lack of credence paid to the very real threat of cuts in federal aid from the Republican-controlled Congress and White House in Washington D.C. The $153 billion state budget for Fiscal Year 2018 includes in its sources of revenue about $56 billion in federal aid, about a third of the $161 billion in revenue for FY18 according to the Citizens Budget Commission (CBC).

It is unclear just how much the federal budget could cut aid to New York, but the comptroller’s report suggests that the state’s Financial Plan doesn’t sufficiently account for the impact of the increasingly likely scenario of significant cuts in federal grants to New York. Cuomo and the Legislature did pass a new provision that allows the state greater flexibility to adjust the budget mid-year in the face of significant federal cuts, DiNapoli notes, but it is not completely clear how that process will play out and whether the state is truly prepared for such measures.

The comptroller also critiqued the use of funds acquired via financial settlements, which have amounted to about a $9 billion windfall over the past several years, as of January. The comptroller’s message states that the settlement money, which is “nonrecurring,” should be put towards financing capital projects rather than to balance budgets. According to the comptroller, through March 31, “the State had spent over $3.1 billion of its extraordinary windfall in settlement resources. Nearly half that amount had been used for various forms of budget relief, and another $461 million is planned for such use this year.”

In a statement to Gotham Gazette, David Friedfel, the director of state studies at Citizens Budget Commission, noted shared concerns between the comptroller and the nonpartisan, nonprofit budget watchdog.

“We echo many of the Comptroller’s concerns,” he said, “specifically the increasing use of settlement funds to close budgetary gaps. Likewise, it is concerning that personal income tax receipts continue to fall below projections, especially in light of potential cuts in Federal aid.”

Both CBC and the comptroller’s report also cast doubt on Cuomo’s claim that annual spending growth has stayed below 2 percent annually during his tenure. In May, CBC released a report explaining how Cuomo manipulated the numbers to tell his preferred story. The comptroller’s report says similarly, listing such budgetary tricks as “the use of prepayments; certain program restructurings which result in costs being reflected as reduced receipts rather than disbursements; shifting spending to capital projects funds; deferring expenditures to future years; and the use of off-budget resources to pay for certain program costs,” which, when accounted for, results in a 4 percent spending increase this year rather than Cuomo’s touted 2 percent.

“We are glad to see OSC voicing the same concern that state operating spending is really growing in excess of 2 percent,” Friedfel said. “The actual growth rate is still below historical norms, but by utilizing accounting adjustments and financial plan reclassifications, the State is undermining transparency to fit an artificial spending growth cap.”

Another nonprofit budget watchdog, Empire Center, had a similar reaction to the report.

"As usual, the Comptroller’s report was fairly thorough in identifying some of the most important budgetary trends obscured by the governor’s spin as well as the financial risks ahead,” said E.J. McMahon, research director at Empire Center, in a statement to Gotham Gazette. “However, one serious risk surprisingly overlooked by the report is the Trump administration’s proposal to eliminate the federal income tax deduction for state and local taxes, also known as the SALT deduction."

SALT refers to state and local taxes. The average SALT deduction claimed by New Yorker taxpayers is $21,038, the highest in the country and nearly double the national average, according to McMahon, in a July blog post.

"Given the state’s inordinate dependence on taxes paid by wealthy residents,” McMahon told Gotham Gazette, “the repeal of the SALT deduction could seriously undermine our tax base by increasing the net tax “price” of New York compared to states with low or no income tax, such as Florida.”

Other gloomy projections the report makes include $5.7 billion more in capital spending for the five-year plan than projected in the 2016-17 budget capital plan; a total lack of deposits to rainy day reserves in the previous fiscal year and the year that has begun; and an increase of $11.2 billion in out-year budget gaps from last year, to $17.4 billion. DiNapoli forecasts outstanding debt to increase by 4.1% to $63.9 billion this year and to $73.7 billion by the end of the current Capital Plan period in 2022.