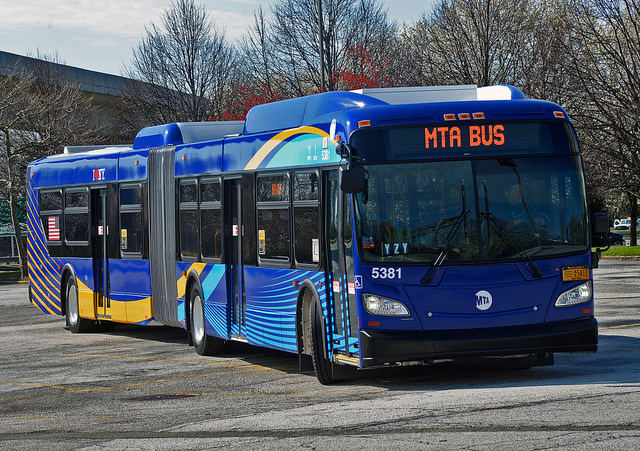 Newly-minted MTA chief Joe Lhota held a press conference last week to announce a rescue plan for the city’s ailing subway system. The agenda includes signal fixes, maintenance work, new emergency response teams, and even rider communication shifts. Lhota’s blueprint comes with $800-plus million price tag, he said, which set off another round of feuding between Mayor de Blasio and Governor Cuomo about how much the city and the state will each pitch in.

While there is a great deal of attention necessarily being paid to the state of the city’s subway system, absent from the new MTA plan was measures to improve bus service. Transit advocates, city and state elected officials have subsequently pointed to buses as an overlooked but essential factor in improving New York City’s transit system, to provide commuters more reliable options and to reach people who live outside subway zones.

Indicative of the need for attention to buses is the fact that subway underperformance and drops in service reliability have not spawned an increased reliance on the city’s bus system. In fact, as the New York Times reported in February, bus ridership fell by approximately 1.6 percent on weekdays and 4 percent on weekends in 2016 from the year before, in keeping with a multi-year trend of falling bus usage.

Following Lhota’s announcement of the new “NYC Subway Action Plan,” State Assemblymember Jeffrey Dinowitz, who chairs the Assembly committee with MTA oversight, commended Lhota for releasing an emergency subway plan, but also encouraged him to address buses in the near future.

“While I recognize that our signals, tracks, cars, and user experience are all at the forefront of public concern and discourse, there are many New Yorkers who need improvements in other areas as well,” said the Dinowitz statement. “Accessibility concerns and bus service remain in need of attention also, and I encourage Chairman Lhota to address these issues soon,” he said. While Dinowitz’s committee has done little by way of MTA oversight in recent years, the Assembly member has put forth some of his own recommendations and took part in a two-day series of subway rides on Thursday and Friday to talk to riders directly.

John Raskin, executive director of transit advocacy group Riders Alliance, who has written and spoken favorably of Lhota and his plan, also said he would like to see advancements on buses.

“Focusing on bus service is a quick and affordable way to improve public transit for millions of daily riders. Implementing long-overdue bus improvements would be a great compliment to the longer, more expensive work that will be needed to overhaul subway service,” he wrote in a statement to Gotham Gazette. “In the near future, the MTA could improve bus service by switching to a system of boarding through all doors, as well as redesigning bus routes to match how people travel today,” he continued, also proposing “adding bus lanes to local routes so buses don't get caught in traffic jams.”

The bus system, particularly bus lanes, as many transit experts point out, can be changed relatively quickly, and by the mayor, if need be. Still, the state-run MTA holds the majority of control over buses as a whole.

SBS is one of the joint ventures set in motion over the past few years that has shown signs of success. Ths mode differs from traditional buses in that passengers board from all doors, speeding up the process at each stop, and the stops are less frequent on routes, making SBS something of an “express.” SBS also uses proof-of-payment, where instead of dipping a metrocard, riders buy tickets at bus stop kiosks prior to boarding (they are checked randomly).

SBS has been deployed on 14 routes across the city; several potential routes to expand the service have been proposed as well. Prominent current examples of SBS are on 1st and 2nd Avenues in Manhattan; the newly-added crosstown 79th Street and 86th Street routes Uptown; the B41, B44 and B46 in Brooklyn; the S79, connecting Bay Ridge and Staten Island; the Q70 which goes to LaGuardia Airport; and several others.

“Both the MTA and New York City DOT can speed up the installation of Select Bus Service, which has proven both popular and effective, making buses run faster and attracting more riders who had given up on the slow local service that came before it,” wrote Raskin.

Mayor de Blasio, for his part, often refers to SBS as a model. “That’s something we think has been a real success story -- so there are sometimes when things have been done the right way, and that’s one of them,” he said when asked about the buses by Gotham Gazette at a Thursday press conference. “Then we want to keep expanding. It’s a good news story,” he continued. “I’d put it in the same category as the other, newer types of transportation that are being developed rapidly: the ferry system, light rail, and obviously the expansion of Citi Bike -- all of these are going to be necessary to give people more options,” he said.

“For [SBS expansion] to be achieved,” de Blasio said, “it requires cooperation between the city and the state and the MTA, and obviously investment by the city on the capital elements of each route.”

Advocates and experts have also called for an expansion of bus service to places that are particularly distant from a subway stop and existing bus routes, such as certain parts of Brooklyn and Queens.

With the impending closure of the L train in 2019, transit advocates have called for augmented bus service during the shutdown, which former MTA chief Tom Prendergast pledged to address last year.

Last month, a coalition of eight transit advocacy groups gathered to announce a list of commitments they would like New York City lawmakers to champion and implement. Improving bus service was among the seven demands. “Unfortunately, service is often slow and unreliable, and buses are generally neglected by policymakers, at the expense of residents who already have the most punishing commutes,” the plan states.

The coalition of advocates is urging the city to add additional bus lanes to local routes along with expanded Select Bus Services. But new bus routes are not the only way to improve service. Stricter, even dedicated bus lanes -- through physical barriers and NYPD enforcement -- are other options in the city’s toolbox. All-door boarding, an important component to SBS, is another endeavor for the city to consider putting into place across the system.

Asked about attention to buses as the subway system has become more unreliable and MTA Chair Lhota said more temporary subway line shutdowns would be needed, an MTA spokesperson said, "We are also focused on our bus customers and several initiatives are already in place to improve bus service. As you know, the MTA is committed to maintaining and expanding Select Bus Service, which has been successful in reducing dwell times at bus stops. Every bus in our system can be tracked with GPS and customers can access this information on the MTA Bus Time app. The same data we use for the app we use to monitor bus schedule and service to help mitigate issues that may arise on the road in real time. Installation of a new fare payment system, which is being worked on, will also speed up boarding," said Kevin Ortiz, of the MTA.

"Additionally, we continue to work with DOT to advance the rollout of Traffic Signal Prioritization city-wide and are looking at implementing all-door boarding where it is practical to do so," Ortiz added. "However, we don’t have direct control of road conditions on city streets. We are continuing to collaborate with DOT and NYPD to prioritize bus service as they address traffic congestion, unauthorized vehicles in bus lanes, double parked cars, and other factors that have the most direct impact on bus speeds and service reliability."

Advocates have argued in favor of expanding transit signal priority (TSP) as a way to speed up existing bus routes. “Mayor de Blasio's administration could also make a difference, by accelerating the implementation of transit signal priority, where lights turn green faster when buses are waiting,” Raskin explained.

Along these lines, TransitCenter, an organization of transportation experts, published a report on TSP. It notes that trips take longer than needed because “New Yorkers are stuck spending 21% of their bus rides stopped at red lights—but they shouldn’t be.” “Transit signal priority (TSP) can be used to extend green lights or shorten red ones when a bus is approaching, speeding up trips and improving schedule reliability,” it says.

The report also outlines New York City shortcomings compared to buses in other major cities. “Other cities around the world aren’t waiting for the light: New York is behind peers like London and Los Angeles, which have been utilizing signal priority for nearly two decades,” the TransitCenter report notes. “There are around 260 intersections providing bus priority in New York today, versus 3200 such intersections in London and 654 in Los Angeles.”

Given the fact that the city already uses TSP, and is effective along these routes -- the report cited city DOT data showing that TSP reduced travel time by 18% -- the proposal suggests that the city adopt a goal of utilizing TSP for 20 new routes by 2018.

“Chairman Lhota and Commissioner Trottenberg should work together to prioritize transit on NYC streets by applying TSP more aggressively and more quickly,” the report reads. “Strong leadership is needed from both NYCDOT and the MTA to realize the relatively painless gains transit signal priority offers.”

Recently, TSP has garnered more support from New York officials. “Transit Signal Priority gives a Green Light to New York City bus riders,” said Polly Trottenberg, Commissioner of New York City’s Department of Transportation, in a recent press release. “We have seen travel time savings of 5-30 percent on the SBS routes where we installed this technology and now that the MTA is moving forward with its TSP procurement, we are pleased to announce that DOT will quadruple our installation rate, covering over 1,000 intersections total and 15 additional routes by 2020.”

City Council Member Ydanis Rodriguez, chair of the Council’s transportation committee, echoed Trottenberg. “Transit signal priority is a crucial part of improving bus service across the city,” he stated in the press release. “With buses shedding riders over the past few years,” he continued, alluding to the reduction in bus ridership, “improvements like this are how we will regain their trust that buses are a fast and efficient option.”

On the state level, in April, the Governor announced a new line of MTA buses that would be equipped with Wi-Fi and USB ports. Two thousand of these newly designed buses will be put to use in the next five years, according to the governor. Cuomo argued they will help reinvigorate the city’s bus system.

“From opening the Second Avenue Subway, to bringing Wi-Fi and cell service to underground subway stations, we are reimagining the mass-transit experience for the metropolitan area,” Cuomo said in a press release. “These new state-of-the-art buses will better connect passengers who are on-the-go, create a stronger mass-transit system and bring New York into the 21st Century,” the statement continued.

The high-tech bus model introduction and a late April press release regarding the addition of a bus “pilot program,” an introduction of 10 new environmentally friendly buses to the existing system, were the last times the state has given buses attention. The governor has mostly spent his MTA attention on subway-related matters, alternating between celebrating the Second Avenue Subway expansion, deflecting responsibility to the city, proposing additional gubernatorial powers to appoint MTA board members, telling the city to pay more money for the system, and taking renewed control of the situation.

Note: this article was updated with comment from the MTA.